Posted by Kel
Oh guys, I wanted to write this pretty much the second the GIR and I left the theater and I had to reign myself in so I could go to bed at a reasonable hour. It’s been a week and I’m still ridiculously excited about Mad Max: Fury Road. Seriously, I may go see it again this weekend if it's at all possible.

**This will be a spoiler-free review. Any linked content will be marked in BOLD if it contains spoilers.** 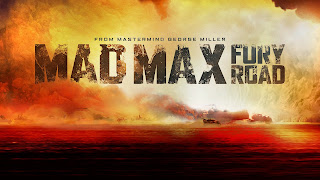 For the first time in thirty years we return to the barren, desolate wasteland that characterizes the Mad Max universe. We’re told via a brief mashup of news highlights that the severe scarcity of certain resources, namely fossil fuels and potable water, have driven various nations to go to war with one another and it’s strongly intimated that nuclear force was employed in at least one of these conflicts. An indeterminate amount of time later, we get our first glimpse of nearly lifeless post-war Australia. That initial panoramic vista serves as one of the very few quiet moments in the entirety of Fury Road. After a somewhat unsettling introduction to the eponymous Max Rockatansky (Tom Hardy)...did he just eat that live lizard?...the film is off the blocks and hardly slows until its conclusion.

Max comes to arrive in the Citadel, a massive fortress ruled over by the tyrannical, Vader-esque Immortan Joe and his raging ranks of War Boys. Ordinary citizens of the Citadel are desperate, deeply broken bits of humanity who flock to their glorious leader largely because he controls one of the few remaining viable sources of water. We see Joe charge what appears to be his favored lieutenant, Imperator Furiosa (Charlize Theron), with the task of driving a massive armored tanker truck, or war rig, to a nearby refinery to collect gasoline.

Mere minutes into her trip, Furiosa veers the rig off course seemingly for no reason. The alteration sends Joe into a panic and, as he careens through his chambers, comes to realize that his five Wives have gone missing and are almost certainly in the rig. Enraged, Joe personally leads the entirety of his War Boy forces in pursuit of Furiosa, bringing an unwilling Max along for the ride.


The remainder of the film is almost entirely the resulting car chase. But make no mistake, this is unlike any car chase you've ever seen. We careen through the desert at breakneck speed and encounter other human clans along with superstorms that give us a taste of the destruction humanity must have sown to have yielded such things. As mentioned earlier, Fury Road barely slows in its pacing from the outset and the handful of slower scenes serve largely as appreciated opportunities to catch one's breath before plunging headlong back into the fray. Between jawdropping maneuvers and screen-engulfing pyrotechnics we learn why Furiosa is absconding with the Wives and what she hopes to accomplish by this daring act.

In conjunction with laying the base narrative, Fury Road unfurls a deeply fascinating mythos from the otherwise completely insane imagery. The sheer amount and depth of worldbuilding that the film tears into being is incredibly impressive, doubly so given the paucity of actual dialogue. If you want to learn more about what's going on then you'll have to pay close attention. The cult that Joe heads is replete with bizarre rituals wrought from an unholy fusion of Norse mythology and a paint huffer's fever dream. We garner just what humans will accept as normal when the essentials are in short supply and ambient radiation has curtailed the average lifespan to Dark Ages brevity. Conversely, we also get to see what happens when that status quo comes into question. 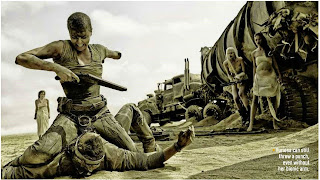 The cast puts forth admirable performances throughout with only one or two moments that felt out of place or otherwise awkward. The characterization is just as intense as the action, allowing us access to a few more snippets of information about the surreal dystopia they inhabit with only a handful of remarks. There's been much ado about Furiosa and her role in Fury Road. All I could say is that it was high time we got to give Ripley and Sarah Connor some company in the Pantheon of Badass Sci-Fi Ladies. She, like Max, is capable in a manner that you'd expect from people living amidst such scarcity. You have to figure that, in order to survive, you either have to be incredibly competent or incredibly willing to surrender your agency to someone who's the former.

Visually, the film is a feast for the eyes that will have you rehashing what you saw for days on end. There are so many quoteables that you'll want to incorporate into every day life. Miller weaves astounding beauty from scenes of wanton destruction and mile after mile of unrelenting desert. The cinematography works seamlessly to enhance the overall frenzied experience with shots and angles that will have you asking how on Earth did they film this? Also headshaking is the fact over 80% of Fury Road's effects were completely practical. It's a stunning and stark juxtaposition to pit Fury Road against its late spring/early summer cinematic contemporaries. As Miller stated on numerous occasions, Max is not a superhero and should not be able to defy the laws of physics. Yes, the actors did swing in 180 degree arcs from poles attached to moving vehicles (many of them are veterans or are in active rosters of Cirque de Soleil). Yes, the majority of the downright absurd-looking cars you see were actually made and could be driven. Fair warning, if you drive home from the theater you may be hit with a wave of ennui given that the vehicles surrounding you will never live up to what you just saw.

More likely is the fact that you will walk away from Fury Road wanting more. Fortunately, all signs point to there being plenty more with this came from. Beginning this fall Vertigo will be releasing a run of four comics that will give us the backstories of Furiosa, Max (over the course of two books), and Immortan Joe/Nux. There will also be at least one art book detailing how the fantastical images when from concept to, in most cases, physical reality. There is a related video game being produced by Avalanche Studios that is slated to be available for PC, Xbox One, and PS4 this September. Finally, the primary cast has signed on for multiple additional films in the franchise (most sources point to two or three additional films).

George Miller, the director of all three other Mad Max film and writer of Fury Road, refuses to call this new incarnation either a sequel or a reboot of the original. Instead, he continually refers to Fury Road as a 'revisiting'. Aside from the protagonist, the base setting, some costume pieces, and a few in-line references, the entirety of the movie is a whole-hog restructuring. Even if you're leery of reboots/sequels, this is guaranteedly going to be a novel experience should you choose to go see it.

Fury Road is a beautiful, insane, high octane spectacle that is not to be missed while it's on the big screen. It's a true blockbuster to start the summer viewing season and it's going to be extremely difficult to top this experience. I cannot recommend it enough.