Posted by GIR
After a brief Q&A with the developers, I felt it was time for a more formal review. Let me begin by stating that Jotun by Thunder Lotus Games is clearly a labor of love. An action-exploration hybrid, Jotun first caught my eye at PAX East and did not disappoint upon release. With a truly wonderful hand drawn art style reminiscent of The Banner Saga, the player is immediately and deeply immersed in a legendary journey through Norse mythology. 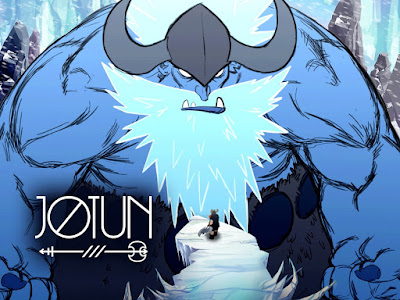 Player’s control Thora, a fierce Viking who’s lost at sea and must prove her strength and courage to the Gods to claim her place in Valhalla. While some may find the pacing to be on the slow side, as Thora traverses gorgeous and varied elemental levels in search of Jotuns to defeat, I couldn’t imagine not taking the time to absorb and appreciate the majestic vistas. Aside from aesthetic reasons, it is definitely worth exploring every inch of a level to find the Norse Deity Shrines to grant Thora boons. For example, Thor's power increases Thora’s heavy-attack damage, Freya grants boosts of speed, Heimdall allows the use of a protective shield, and Frigg provides apples to extend her life bar; all of which players will assuredly need because Jotuns are seriously tough.

Combat may be generously spaced, but each fight is an epic struggle in the vein of Shadows of the Colossus or Titan Souls. Thora, who is little more than a mosquito to the hulking Jotuns, must memorize an increasingly complex set of boss attack patterns to learn when and how best to capitalize on the few openings that exist. As vast and slow as exploration feels, combat is fast, frantic, and lethal. The environment itself can also often be as dangerous as the Jotun themselves. 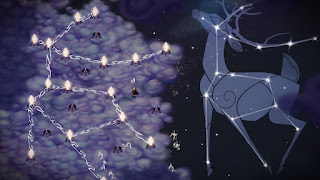 While I was slightly put off by some of the puzzles I stumbled across during the exploration phases, I realize that is a bit of personal bias; like Thor I prefer to solve my puzzles by hitting them as hard as I can with a hammer until the pieces fit together. Unlike other games where puzzle sections can cause a disconnect and bring a player out of an experience, I can assure you that is not the case here. Like with all other aspects of Jotun, Thunder Lotus has gone to great lengths to forge the very essence of Norse mythology into the puzzles themselves to make sure the immersion and theme remains intact. The best of these moments to me was using lightning to recreate constellations.

Jotun is a somewhat short game that can wrapped up in about 10 hours, but I felt was an appropriate length. It was just long enough to satisfy me but also keep me wanting more. Thora’s journey was a stoic and difficult, but worthwhile one and I’m glad I had the opportunity to accompany her on it.
Jotun released last month and is available on Steam for $14.99. If you like 2D artistic games heavy on the atmosphere and a strong Norse theme I strongly recommend checking it out. Full Disclosure: This review was written based off a review copy for the Steam version of the game provided by Thunder Lotus Games.