Posted by GIR
With over 350 hours played on Steam, Left4Dead2 constantly reminds me that, while I may be an RPG gamer at heart, it was this co-op FPS that became one of my greatest gaming loves. It's the game that I could never give up, that is until I got my hands on the recently released Warhammer End Times - Vermintide by Fatshark. 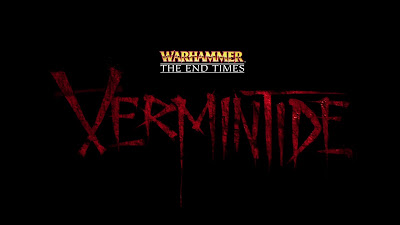 The End Times is the great cataclysmic apocalypse that was prophesied to bring about the end of the Warhammer Fantasy setting. Vermintide focuses on the city of Ubersreik which is being overrun by a horde of Rat-Men called Skaven. A group of five unlikely heroes must work together to try and save the city and, barring that, at least survive long enough to escape. 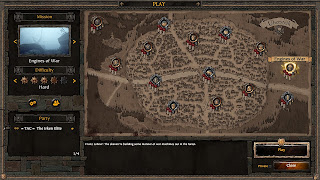 Over the course of 13 different missions four players will battle their way through several richly detailed environments ranging from a Mage Tower built by MC Escher to the docks and sewers of the city to the surrounding countryside. Most missions follow the formula L4D soundly established: move along a mostly linear path until you get to a set piece where you have to hold out against waves or enemies, or collect something to deliver before you can advance further while being ambushed by hordes of adversaries. Sadly, the storyline itself isn't quite as detailed as the maps it pulls the players though. That said, the narrative is certainly serviceable, but doesn't quite seem to tap the full potential of Warhammer Fantasy lore.
Being a Co-Op Action FPS, the core mechanics are the standard focus on melee and ranged weapons (with a light emphasis on the former) while battling hordes of basic enemies occasionally bolstered by special units. Unlike each of the survivors in L4D, in Vermintide each of the five playable hero classes has a unique skill, gear set, and specific roles they are best suited for. While other co-op games have you finding gear and loot throughout the levels and missions, Vermintide has a loot reward, inventory, and crafting system that allows you to tailor your chosen hero to best fit your play style. 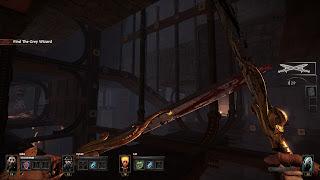 Everyone has a primary and secondary weapon slot as well as space for trinkets they can customize before you set out on a mission. For example, the Empire Soldier Markus or Bardin the Dwarf Ranger can use a one-hander plus a shield to get higher endurance which allows them to block melee damage or shove enemies away, giving them more durability. The Mage has a variety of staves that will change how her magic works, causing her flames to act like a beam, area explosion, or a javelin she can hurl.  The Elf Waywatcher has bow that can do poison damage over time or fire homing arrows.

While this diversity in gear and loot is great for flexibility in terms of play style, it’s also a double edged sword (no pun intended). The reason behind this is that the only way to get much of this gear is the somewhat controversial loot system. At the end of each successful mission players get to “roll” a set of dice that will determine the reward you get from a list of options displayed to the right of the screen. The quality of loot available depends on the difficulty level of the mission, but there’s no guarantee the player will get something good if they roll poorly and, even if they do, it might not even be for the heroes they prefer to play. Ostensibly, the loot system was configured as a tactic to try and get people to try out all of the heroes instead of sticking to a single roll, but things rarely work out that way. I still have nothing but normal (white) gear for the class I wanted to play most, the Witch Hunter, but, as a Level 30 running hard, I am forced to play the role I have the best gear for or risk dragging down my allies. 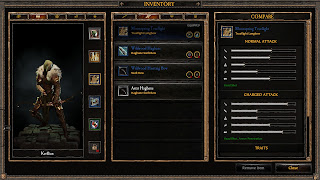 You can slightly improve the odds of better rewards by collecting hidden items called tomes or grimoires, both of which take up a healing item or buff slot so there’s a neat risk/reward aspect in play. The grimoires, in addition to taking up a potion slot, also reduce the entire teams Max Health and can’t be dropped or they are lost for the mission. Tomes, on the other hand, can be picked up and put down at will. This can be helpful, but not every mission even has them which leads to a somewhat lopsided server list in terms of what’s being hosted. I definitely enjoyed this mechanic, as it incentivizes players to work together and discuss if it’s worth doing none, one, or both grimoires based on map difficulty and current party health. That said, I do play with friends who communicate well. In public games with strangers people’s personal experiences may vary.

To try and alleviate some of the grind, Vermintide has a crafting system that allows players to recycle useless or duplicate gear into a better quality item. The conversion rates in said system are 5 Whites = 1 Green, 5 green = 1 Blue, 5 Blue = 1 Orange. Despite this, the item crafted can still be bad so, like the dice, you're at the mercy of a random number generator. Even more frustrating are the trinkets and hats which can't be crafted or recycled for parts and, after playing long enough, you'll could end up with a heap of worthless clutter in your inventory. 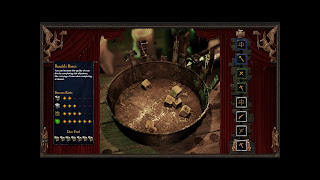 Combat itself is good and engaging and, overall, the game is fairly challenging. The weapons really do feel responsive in that a one-handed mace will swing really fast compared to a hulking two-handed hammer; blades swish nicely as they cleave Skaven limbs from bodies, and shields thump under heavy Skaven assault. I know some people feel that the AI is no better than zombies of other games. but I strongly disagree. Full stealth is never an option but taking down a group of Skaven in a watchtower with a bow can allow a group to sneak past a larger group and save that precious healing for finales and recovering after ambushes. If the players go loud using guns and bombs on that same watch tower they will draw a larger horde, wasting time, healing, and other resources. Even the most basic units know not just to swarm, but to try and flank to get behind players. Also, unlike zombies, the Skaven will recoil in fear when players land critical kills or bring down special units. Sometimes that moment of respite is the difference between regaining enough stamina to block an incoming attack or getting dropped and leaving your allies a hero down as the tide of vermin continues to grow.

For players familiar with L4D, the parallels in special unit types in Vermintide will be obvious and likely easily dealt with but, for the uninitiated, the challenge of learning how to deal with the tougher Skaven can be difficult but rewarding once a rhythm and pattern of blocking/parrying/counter striking is established. The 5 Specials are: Packmasters, which will latch on and drag players away from the group; Ratling Gunners, who lock onto a single player and unleash metal hell using a gatling gun; Poison Wind Globadir who hurl long range gas bombs which cloud vision and damage over time; Gutter Runners who teleport and pounce on players, eviscerating them; Rat Ogres that are basically like the Hulk and require the whole team to bring down; and Stormvermin, which are larger, heavily armored rats with heavy weapons. The last type is also unique in that patrols of about a dozen roam around on various maps and, again, players can use stealth to avoid these which on lower difficulties isn’t always necessary, but at higher level play is mandatory as even the best geared players will quickly be facing a TPK (Total Party Kill). 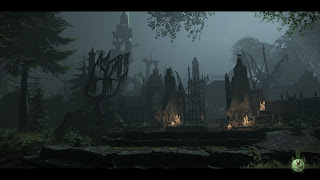 While the influence of L4D hangs heavy around Vermintide like the fog around Ubersreik, I don’t think that’s a bad thing. Frantically fighting off hordes of enemies back-to-back with your friends as you wait for a gate to lower so you can escape a doomed city is the whole point right? Desperately trying to revive a downed ally while a Rat Ogre roars bearing down on you full speed will never stop being thrilling to me. It’s been 6 years since L4D and there has been no worthy successor. I’m here to say I now feel there is and it’s Vermintide. This is, hands down, the best FPS co-op experience a player can get today.

Warhammer: End Times – Vermintide released on 10/23/15 and is available on Steam for $29.99.  Pick it up today and let’s save Ubersreik together, or die trying.