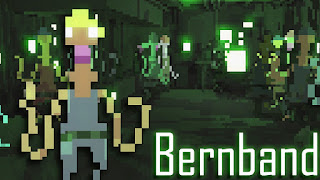 Have you ever had the urge to explore an alien city, walk down its alleyways, mingle with its crowds, and discover its night-life?  If so, you are about to be very happy.

Bernband is an ambulatory city exploration simulator created by Tom. It's free to download over on Gamejolt. Though the game was released in September 2014, I only became aware of it recently and decided to give it a shot; I'm very happy that I decided to do so.

The city you explore is known as "The Pff". Imagine you woke up in the Star Wars galaxy on Nar Shadaa, the Smuggler's Moon, Little Coruscant (Disney, make this happen dammit). You're in a sprawling alien city, neon lights and bars everywhere you go. But despite the night life attractions 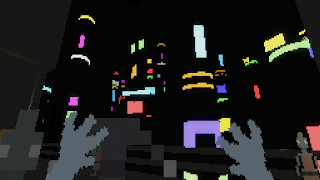 this is still a city where people live. You find schools, music recitals, dance recitals, churches, convenience stores, restaurants, greenhouses, and, of course, bars. You'll also find bums down on there luck and drunk people urinating in dark corners, but that's really to be expected in any major city.  There are no humans to be found and I'm fairly certain you don't play as a human based on the appearance of the hands of your character. However, it does appear that the denizens of the city are aware of Earth since one night club is banging to a rap with English lyrics, there is an art gallery which depicts the denizens' strange fascination with Troll Dolls, and one convenience store owner apparently is a fan of Japanese television. 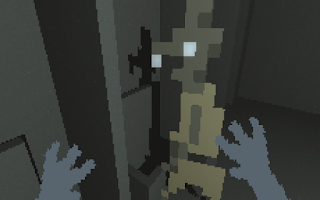 Graphical fidelity is low, akin to DOS-era graphics but slightly better, so imagine someone smeared Vaseline on your character's eyes.  The sounds of the city are very captivating despite this. You can't understand any of the alien languages or songs, but it's interesting to hear people in crowds talk to one another.  I could be content with just sitting in one of the bars and listening to the alien band jam for a while, or sitting in one of the concerts going on in the city.

The city itself feels like a city except for the lack of more doors and hallways to explore. Given the size of the simulation, it's easy to understand that there could not be infinite branching paths at every junction, but it's a bit disappointing when you consider the possibilities for such a simulation. Imagine if the city was built using a procedural generation akin to games like Noctis (one of my favorite games of all time despite its outdated graphics and terrible controls). Each intersection could have multiple branches and each branch could also have multiple branches ad infinitum.

Unfortunately, Bernband only lets you explore so much of its alien city, but that little taste was 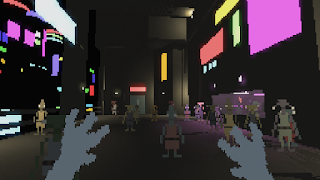 enough to make me very happy. The low fidelity visuals accompanied by properly chosen sound effects did wonders for making the city seem real. The sounds of air cars whooshing below the bridge you're crossing and the murmurs of the crowds make the city feel alive. The thrum of generators and the hum of power flowing through walls make empty areas still feel a part of this living city.

There are a couple of minor issues with the simulation. You must touch the right spot in the middle of an elevator to get it to move.  You slow down while walking if you're touching a wall.  But the biggest oversight in my opinion was that there was no option to run, which meant exploring areas I had already visited took longer than I wanted it to.

Bernband is a simple simulation. There is no HUD, overlay, or options menu while in the simulation, 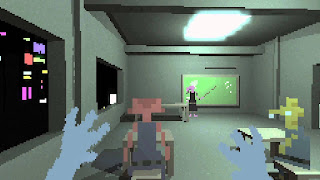 giving a more realistic feeling to the experience. However, this means that when you hit escape, you're closing the simulation and losing your position in the world, you will need to start from the beginning again. The city isn't massive, it'll take you about 20-30 minutes to visit every location, but you might want to spend a bit more time looking for the secret tunnels which I found very neat; they gave me the feeling of being a denizen of the city and knowing the city's back routes.

As an added layer, I feel that it would be very interesting to play this simulator with another person present and discuss the architectural choices of the alien city, their implications, and the psychological impact they might have on the denizens. But then again, I'm strange.

I highly recommend Bernband. If it had been sold for a couple of dollars I would have found it 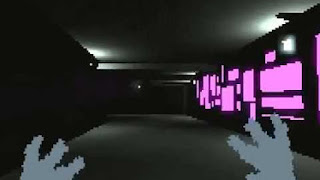 worthwhile for the enjoyment I received, but since it is free I am willing to say that this simulation is fantastic for its price. Bernband won't be for everyone, if you need a game with interaction or story, this is not the right choice for you. But if you are interested in experiencing being a tourist on another world or the artistic possibility of indie digital media your should really give this a go.