And just like that we're on the cusp of September. I know, I know. That's some serious old lady speak. Apparently my next foray into super science should be a remote control that can manipulate the space-time continuum. <<drums fingers>> Excellent.

You know what else is excellent? The fact that the players in my inaugural run as a GM still haven't fled in terror. Three sessions in and they're apparently sticking around. I'm going to give the vast majority of the credit for that to the system, for it does indeed deliver on its promise to be narrative-based fun.

Now that we've all had a bit more time and opportunity to get our role-playing hands dirty, I wanted to update the earlier Edge of the Empire review with some of our experiences and observations. Hopefully these will come in handy if you're considering running a campaign in the system or if you've signed up for the public beta of the successor volume, Age of Rebellion. The following tidbits are divided between commentary gleaned from the players and input from my point of view, as the GM. 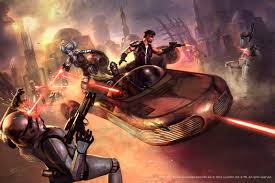 My players are generally affable nerds with considerable role-playing experience who relish the opportunity to roll some dice and utilize their imaginations in the Star Wars universe. While they can get particular, none of them are 'rules lawyers', despite the fact that one is, by profession, a lawyer. For the most part, they've enjoyed the flexibility that the system provides in terms of character maintenance and interaction with NPCs. As discussed in part one of this review, the core mechanic of the game centers on creating a brisk, complex narrative. The most common remark I've heard regarding this is that the core mechanic and, by extension, the system as a whole, is something of a double-edged sword. The degree of freedom is unlike most other systems and my players have reveled in being able to do pretty much anything that springs to mind. They now have several sources of illicit income derived entirely from activities for which there are no formal rules or guidelines, but sprang into being simply from, "I do X, would that then let me do Y?"

It's a lot of fun to see them get to stretch those imagination muscles and dive into a universe almost entirely unfettered. However, sometimes that lack of structure can be more of a bane than a boon. There are a significant number of concepts, activities and encounters that have no more explanation than, "Whatever the GM feels is appropriate." Understandably, this can cause frustrations when the players are trying to formulate a plan of action or lay out logistics for how they intend to fill the downtime between encounters.

Crafting is one area that could have benefited from a bit more guidance. Things like scavenging or modifying a weapon seem at least somewhat straightforward in their intent, but the activities themselves are enormously broad. Scavenging in particular is frustrating because there are no rules differentiating someone looking for any potential usable parts versus someone looking for a rare metallic alloy with which to make an auto-cocker for their bowcaster. To address this, we've modified the rules governing the rarity of a given item (meant to apply to the purchasing and sale of goods in the game) and applied them to salvaging components.

The core rulebook lists what skills may be utilized in order to make scavenging checks, but everything else is, "Whatever the GM feels is appropriate." Want to add a scope to your sweet carbine and improve your aim? Sure thing. The core rulebook provides instructions as to how many free hard points are required for the task but, as for the actual time and effort it will take to mount the scope to the carbine? Eh, "Whatever the GM feels is appropriate." I'm not saying that every handicraft and activity needed a correspondence chart. Yes, the system is narrative based, we understand. But it would have been very helpful to get just a bit more clarity on certain things, particularly when the talents that support crafting get some explanation, but the craft itself does not. Though, as mentioned, my players aren't 'rules lawyers', they were meeting with difficulty trying to ascertain these details definitively, building off of previous experience with other systems that do provide substantial instruction. This may be parsed out and addressed in future rulebooks.

Speaking of rulebooks, the core rulebook itself is dense and quite lengthy. Is it a Randian tome? No. Does it take a bit of effort to get comfortable with? Yes. With such a new system, it's taken a few sessions for my players to tap into the rulebook and start creating synergies or applying talents for maximum effect and that's to be expected. What might be nice in the future is an online dictionary or wiki, akin to what Paizo has with their Pathfinder system, that would allow players to look up aspects of the game and study them at their leisure.

Though I've loved the system, and being able to GM, quite a bit thus far, the lack of structure regarding certain skills or interactions has been as big a source of frustration for me as it has been for the players. While I do my best to explain the logic in any rulings made where formal written rules leave off. The vast majority of said logic is founded in my existing knowledge of the Star Wars universe which is handy to have, but not required. There are also suggestions as to what you can do if you'd prefer to run your campaign outside of established canon. Only one of my players is similarly obsessed versed so, on occasion, without formal rules, some of the rulings themselves do not make complete sense to the rest of the players. This is obviously also something I need to work on as well.

That said, if you do decide to use canon in your campaign it can provide some seriously awesome, potentially goosebump-inducing moments for both you and the players. At one point in the last session the players landed in a hangar bay riddled with blaster fire and made their way to a nearby cantina. Only after seeing an all-Bith band playing "that same song" did they have the realization that they were standing in that cantina and parked in that hangar bay. Similarly, watching them roleplay after learning critical bits of information, like that Alderaan had just been obliterated by the Empire, was a pleasure in itself and truly where the core mechanic gets a chance to shine.


Some things that are ok for the time being, but feel, for lack of a better word, clunky include two types of combat: mass and space. The rulebook does an excellent job of laying out not only the base protocol, but three alternate courses of action a GM can take when laying out adversaries for the PCs to confront. That in itself is great but, akin to our qualm with the crafting, this section could have benefited from just a bit more explanation. Something as simple as "we recommend you use this for groups of 5 or more" would go a long way in preventing needlessly drawn out combat sequences.

Space combat, while fun, is also fairly complex. Part of this is due to our relative inexperience, but it is also not the simple extension of personal combat that the rulebook makes it out to be. For this there is plenty of instruction, but it seems especially dense given that other sections, including those governing more common activities, aren't given nearly so much detail. We go from "Whatever the GM feels is appropriate" to "you need to reach this speed within this range and position yourself within this arc to be able to have even a chance of hitting a craft of this silhouette." It's fine. As with everything else, we're still learning and will get more comfy with space combat in time but, at present, it seems a bit uneven and tends to weigh heavily on the pace of the game.

Something other GMs may want to do is to counsel their players on the importance of having at least one individual with a minimum of two ranks (the most a PC can have at the game's outset) in the skill Pilot (Space). GMs may want to provide this designated PC with a copy of the rules governing pilot only maneuvers and actions before the campaign begins so the player can familiarize themselves with these unique instructions. They are almost assuredly too much for one person to take in and utilize effectively while in the heat of combat.

It's been a great experience thus far. Here's hoping that this continues.

Wishes for a wonderful Labor Day weekend for all those celebrating these next few days and a happy con to those lucky nerds headed off to Dragon*Con or PAX Prime!