Hey everyone! It seems as though this summer has just evaporated, or maybe those "Back to School/Summer Clearance" sales follow Christmas marketing campaign protocols and just keep appearing earlier and earlier in the season. In any case, it's somehow mid-August and at this point in just about any other year this post would be replaced by a "see you guys after Gen Con" notice. Even though the GIR and I did our damnedest to mentally prepare ourselves to miss the convention this year, I was still more than a little bummed out on Thursday at 10am EST imagining the doors to the dealer hall being flung open to kick off the festivities. The past few days have literally been a deluge of note-taking, video-watching, and twitter following to try and glean the most from what's coming out of the Indianapolis Convention Center, the results of which will be mushed together in the form of a review-in-abstentia post next week.

Before the sad attempts to approximate the Gen Con experience, the week brought an interesting distraction. On Tuesday, the Syfy network debuted its latest attempt to capitalize on the Nerdaissance, Heroes of Cosplay. When news of the new reality series hit the interwebs back in early July it was greeted with equal parts dread and pronounced skepticism. For every instance of, "it's Syfy...who would take them seriously enough for this to matter?" there were six more, "This is going to ruin cosplay! Our hobby can't be brought to the mainstream! They're going to make us all look crazy. We'll never be taken seriously! <insert flailing and panicking here>" 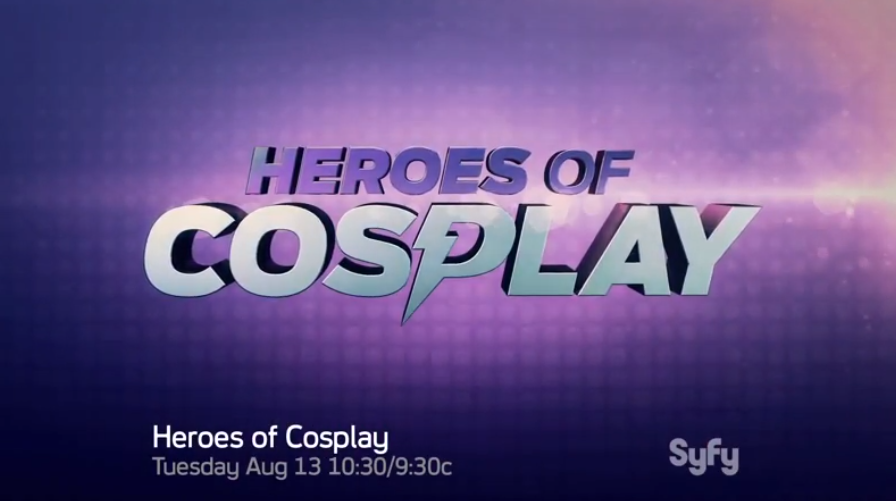 So, now that the first episode has been released to the masses, was it really all that bad? Are we at risk of having cosplay besmirched by melodramatic keening and unskilled TV producers?

Deep cleansing breaths guys. For all the angst and anticipation, the show really and truly was not as bad as it could have been. Was it good? Eh, not really. My verdict thus far, one episode in, is not that the show was decent, it just wasn't as horrific as much of the community had feared it would be nor is it likely have an appreciable impact on the culture as a whole.

Brief synopsis: Heroes of Cosplay is a reality series framed around the efforts of nine cosplayers with varying degrees of costuming experience as they create ensembles to compete in contests at a handful of conventions.

First and foremost it's a reality show, so there's a considerable dose of manufactured drama both from the cast members and the producers. The instances of catty behavior (of which there were only a few) that met the lenses appeared to be just as much individual insecurity/narcissism as it was tactical editing, but no more or less so than any other show of its ilk. Secondly, though the program makes itself out to be this big expose of cosplay practices and culture, it's focus is remarkably narrow, but more on this in a minute.

The Good:  Yes, there was some good. For serious. Heroes of Cosplay did a surprisingly decent job conveying the fundamental motivations for most cosplayers: adoration of the subject matter and a deep love of the creative process. This would probably be less of a consideration were the show a documentary rather than a reality series, but the fact that the cosplayers were not depicted as crazed divas utterly detached from the world outside of costuming should give members of the community cause to sigh in a bit of relief. The show could just as easily have also been, "let's gawk at these insane adults who play dress-up in public!" Thankfully, that was not the case.

The show also handled some of the logistical and pragmatic aspects of cosplaying with a measure of care. The audience got to see that yes, making a costume is often a very time-consuming process that involves a diverse set of skills. Yes, the materials and machinery sometimes required to pull an outfit together can be very costly. Yes, the act of transporting a costume, getting it on your person, and walking around in it can be nerve-wracking, especially if you're trying to pull something together quickly or are unfamiliar with a given convention.

A very interesting point Heroes of Cosplay brought up (and arguably overemphasized) is the notion of "going pro", of actually deriving your primary income from cosplaying which, quite frankly, is still really novel. It's amazing and fairly awesome that such a thing is possible and is one aspect of the Nerdaissance that hasn't gotten much press: that an increasing consumer base can also translate to revenue streams that never existed before. Correspondingly, this new profitability can allow an increasing number of nerds to make transmute their hobbies into their careers. Interestingly enough, the show made no discernible effort to glamorize the concept of being a professional cosplayer. It was very clear that such a profession involves a substantial amount of hard work to receive intermittent, irregular payouts in a best-case scenario. The so-called titular heroes are all at various stages of development with regard to a career in cosplay and all are given ample opportunity to leverage their screen time into advertising.

The Bad: As mentioned above, the scope of the show itself is pretty narrow in that it revolves around costume competitions at various conventions. One of the cast members made a point of mentioning that this wasn't normal for her, that contests were a wholly new experience. This is the case for most cosplayers and the standard costumed convention experience is pretty much relegated to highlight reels and dynamic alternatives to a star wipe. The decision to focus on contests is understandable: it's contained, has a definitive outcome, naturally builds drama and tension, etc, etc. However, this presents a skewed perspective of cosplay but I suppose Heroes of Convention Costume Contests doesn't quite have the same ring to it.

Correspondingly, the conditions under which the heroes have to make their outfits are almost comically strained. Very few cosplayers would try to throw an outfit together in less than a week, yet this is what the show expects of its cast. Granted, the cast also have access to their "teams" of creative minions so the show often felt like someone had taken their best idea of what nerds should be and tacked them on to Project Runway. Also, some of the choices made by the heroes led me to believe they were actively counseled to undertake dramatically arduous construction processes (either that or they just really didn't know what they were doing). One cast member, attempting a Merida costume, sighed and huffed over having to change a blonde curly wig to a red hue by coloring each strand by hand with a magic marker. She claimed it would take 15-30 hours of work to complete. You know what you can have shipped to you (at the shoot's locale in Oregon) in approximately that time frame? A red curly wig.

It's understandable to try and foster some level of drama for the sake of entertainment, but the intercessions by producers on this "reality" show were eye-rollingly blatant.

The Ugly: It wouldn't be a reality show without at least some level of in-fighting, condescension, and pompous behavior. While it didn't possess these to the same degree as other programs, Heroes of Cosplay definitely had all three elements in play almost from the get-go. Perennial cosplayer and cast member Yaya Han was regularly depicted as prima donna (despite doing just the opposite when having her shoot promos for the show) while others were alternately whiny, snippy, and mercurial.

One cast member probably made the majority of the cosplay community cringe collectively mere moments after she was introduced. An actress by trade, there was a great show made of her self-prescribed "method training" to get into character. Don't get me wrong, trying to get into character is almost never a bad thing when you're cosplaying, but this girl was every bad stereotype of a high school drama club diva rolled into one. Furthermore, it was quite clear that this particular cast member is into the hobby largely for the attention as one of the other heroes pointed out that the Drama Diva had a very limited repertoire of costuming skills and played primarily to characters that merely suited her body type rather than those from properties that she had a personal attachment to. The Diva admitted this was true. We are fortunate that there was only one of these amongst the ranks of the heroes.

Lastly, the casting itself was disappointing. While it's great to see highly talented and experienced members of the cosplay community like Yaya Han and Riki LeCotey get more publicity, the actual makeup of the cast underscored some of the demographic issues plaguing our avocation. Of the nine heroes, only 1, Yaya Han, was not Caucasian and only 1, Jesse Lagers, was not female. Every single cast member was very slender and one was almost assuredly surgically enhanced. Yes, yes viewers usually want to see pretty people on TV, but you're telling me there's not a single size 12 semi-pro cosplayer out there? There wasn't a single African American cosplayer to be found? Meh.

So there it is. Not great, but far better than it easily could have been. With only 6 episodes in the season, it will be interesting to see what Syfy does when the show's run is complete. And hey, we don't know just how many of the network's resources it will take in order to make the much-anticipated sequel to Sharknado.