It's time to act on what I've been promising you guys for the past week or so: a breakdown of the gaming highlights of Gen Con 2013! I may not have been on the floor of the convention this year (that whole getting married thing snapped up the lion's share of vacation time for the GIR and I), but I was going to be damned if I let a little thing like geography get in the way. Geography…pfft. If the attendance figures trickling into the media stream are even somewhat accurate, it would imply that Gen Con grew nearly 20% year-over-year with nearly 50,000 unique badge-wearing visitors. That right there is all sorts of awesome. Lots of happy, considerate gamers tends to make for a grateful, gracious host city which, in turn, sets the stage for excellent conventions to come!

Of course, there were plenty of games to be had from game developers of all sizes and specialties, many of whom were thoughtful enough to craft blog entries and post video of their goings-on in Indianapolis for those of us attending in spirit. Akin to last year's rundown, I'll categorize all the announcements from the con by publisher/distributor.

Fantasy Flight Games (FFG) Though this year's "InFlight Review" was markedly leaner than what we got in 2012, FFG didn't come out to Indy empty handed.

- Building onto its burgeoning roster of 2-player tactical games, FFG announced that they will be producing a second edition of the BattleLore.  This update was crafted by the designer of the original title, Richard Borg, who sought to make the squad-based epic fantasy rumble more robust than its predecessor. There will be stats for each individual unit in your armies to replace the older 'color block' system of stat-tracking. Full details concerning the update can be found here and the game itself is scheduled to be released in the fourth quarter of this year.

- Further testament to FFG's now 5-year-old partnership with Games Workshop is Warhammer: Diskwars. Designed for 2-4 players, the game draws on the original Diskwars lets the mighty factions of the Warhammer universe be pitted against one another in fast-paced tactical combat. The title is slotted for release in the first quarter of 2014. - Civilization: the Board Game got a new expansion in the form of Wisdom & Warfare. As the title of the latter suggests, the expansion is designed to help players hone a more diverse and productive social climate in their empire as well as add new functionality to combat units in order to make warfare a more dynamic undertaking. Both the new expansion and the base game are now available online and at your local game retailer.

- Expansions were largely the name of the game for FFG this year, with Cosmic Encounter also receiving new material in the form of Cosmic Storm. The Cosmic Encounter expansion adds 25 new aliens, Space Station structures, and a new win condition: Space Station Conquest. Cosmic Storm was released for sale at the convention and is now available at retailers both physical and digital.

- In keeping with the expansion theme, the star of last year's InFlight Review, Star Wars: Edge of the Empire, got the add-on treatment as well with the release of Beyond the Rim. This announcement comes right on the heels of the debut of the core rulebook on July 5th, but this didn't seem intentional. Either FFG is adhering to its original production timeline or it's trying to atone for the fact that the core book got into our hot little hands a calendar quarter after the original delivery date. Beyond the Rim is a full length adventure and should, hopefully, maybe, be released later in the third quarter of this year.

- The next incarnation of FFG's gargantuan RPG system, Star Wars: Age of Rebellion, is on schedule to be released in the first quarter of 2014. If you'd like to get in on the beta for the narrative dice-rolling goodness you can sign up here.

- The best-selling X-Wing Minis game received two new ships: the Tantive IV and a Rebel Transport. If you think those seem like enormous vessels for what was originally a dogfighting game you wouldn't be wrong. X-Wing Minis will also receive a new rule set, Epic Rules, to accommodate space battles with capital-class ships.

There was allegedly a bit of an awkward moment in the FFG booth. Apparently the developer was not ready to go public with the deckbuilding game Blue Moon but eager geeks came across a mock-up in the booth and couldn't contain their digital squees.

Best known as the makers of ice breaker/polygraph test The Resistance, IB&C premiered their newest title, Coup. In Coup players assume leadership of an up-and-coming noble family in a corrupt medieval Italian city-state. Using the resources available, and your own guile, you attempt to garner influence over your fellow players, deducing what resources they have available and winnowing said goodies away.

In related news, the alleged highlight of the entirety of Gen Con was a semi-impromptu mash-up of The Resistance and the flagship product of Asmadi Games (IB&C's partner for the con). Yes folks, there was some We Didn't Playtest This Resistance.  My soul hurts knowing this went down and I was not there to see it.

Perennial convention favorite Steve Jackson Games caused quite a stir as they announced that they would be partnering up with USAopoly to create Munchkin: Adventure Time. This, along with Munchkin: Pathfinder will be released in early 2014.

Speaking of USAopoly, the publisher had a couple of titles that it brought to Gen Con in its own right. Foremost amongst these is the latest update on a classic, Risk: Plants vs Zombies. In addition to floral battles with the undead, USAopoly brought some love for Bronies everywhere. Behold my friends, Monopoly: the My Little Pony Edition. 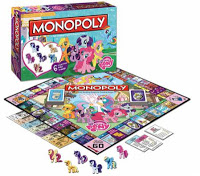 Fans of Upper Deck's Legendary Encounters series and/or lovers of the Aliens franchise thrilled at the news that Legendary Encounters: Aliens will be gracing the shelves next year to coincide with the 35th anniversary of the release of the original Alien film.

There was all sorts of excitement in addition to the bevy of new games. Warden of all things Pathfinder, Paizo Publishing, cleaned up at the Gen Con En World RPG Awards (the ENnies), taking the crown for Best Publisher, Gold Product of the Year (NPC Codex), Best Adventure (Rise of the Runelords Anniversary Edition), Best Setting (Magnimar: City of Monuments), Gold and Silver Best Monster/Adversary, Gold and Silver Best Miniatures, Silver Best Cover, and Gold Best Free Product.

Lastly, a Guinness world record was set during the course of the convention as nearly 1,000 attendees crammed themselves into the JW Marriott to play the largest game of Settlers of Catan in history.

Whew! It's no wonder that the lucky nerds who attended are likely still exhausted. Kudos to all the volunteers that made this year's Gen Con so awesome and you better believe the GIR and I will be at the Convention Center next year!