Cosplay: In Before the Retcon

*Waves* Hi guys. And a happy short work week for those who were lucky enough to have Monday off. The past few days have been excellent, but simultaneously jam-packed and that trend is scheduled to continue for at least another week. Last weekend the GIR and I got to experience Anime Boston for the first time (courtesy of our friends at Asmadi Games). While we felt a little old, the average age of attendees was maybe 16, and the Hynes Convention Center is less conducive to large crowds than the BCEC, which hosts PAX East, the event itself was a lot more fun than we anticipated it would be. The overall vibe of the convention was enormously positive, Artist's Alley was particularly striking, and there was a wealth of interesting, energy-filled events. While some of this enjoyment is likely due to the fact that the GIR and I are in convention deficit, since our transoceanic sojourn earlier this year ate up the vacation time that would normally go to Gen Con, Anime Boston impressed us enough that we'll likely add at least 1 day of said goodness to the convention docket for 2014.  You can check out pictures from the halls of the Hynes on our Facebook and G+ pages.

Wandering about the convention was loads of fun, but I felt distinctly discomfited not being there in costume. Anime Boston boasted an enormous number of cosplayers and a myriad of costumes ranging from the wholly homemade to semi-professional and I found myself itching to join their colorful ranks. The GIR and I found out we'd be headed to Anime Boston about 2 weeks before doors opened, so it wasn't possible for me to toss something together or repair an existing costume in time.

Really? You didn't have anything on hand at all?

Ok, it wasn't that there was no costume to be had. A more accurate appraisal of the situation would be that my costume-making attentions were decidedly elsewhere.

Elsewhere? But three paragraphs back you mentioned you had no other conventions to attend this year.

This is true. +5 points for being observant. Here's the thing though, there will be costumed celebrations as part of that whole me turning 30 business. Said revelry is going to be centered around one of my favorite properties of all time: Star Wars. There have been a couple mentions on here of my now decades-old obsession with all the things from a galaxy far, far away. Naturally, there was little debate as to the theme of a sizable birthday bash.

It so happens that these plans are coming to life mere months after the announcement that we'll be getting a new trilogy in the next couple of years. This is, of course, all sorts of exciting in its own right, but fans whose purview reached into the Expanded Universe crooked an eyebrow. Would the new movies adhere to what we'd considered canon for the past few decades? What few snippets of information we've received thus far seem to indicate that no, said films will likely exist in their own continuum.

Given this potential that some now long-established characters could very well be retconned out of existence, I wanted to pay special tribute to the EU by recreating one of its best-known inhabitants and my personal favorite non-cinematic character: Mara Jade Skywalker.

Heir to the Empire was my very first foray into the Expanded Universe and I distinctly remember crossing my fingers when I'd finished the text in the hopes that Mara Jade would make additional future appearances. Up until that point there was Leia, Leia, Leia, and maybe a minute's worth of Mon Mothma. That was it for compelling female characters in Star Wars. The introduction of a super-competent fiery Force-sensitive assassin brought a grin to my pre-middle-school face. I've been wanting to cosplay as her for quite some time and am thrilled to get the chance.
If this costume had been for a convention or if I'd had additional time to prepare, I would have made the entire ensemble from scratch but, with only three weeks before the party, a little pragmatism had to come into play. In all likelihood, I'll revamp this costume for future use.

Mara Jade has a handful of highly recognizable trademark outfits. After examining each, and incorporating some input from the GIR, I decided to go with this from the Emperor's Hand comic series. 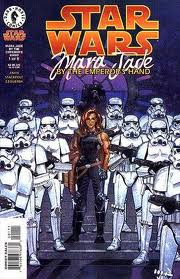 The costume has only a few base components: jumpsuit, cape, utility belt, goggles, and gloves. Each of these features a few key details that makes them distinct. Unless you are determined to make every item from scratch (which itself is entirely possible with this costume), it's not a terribly demanding project.

Jumpsuit: If you are going to a competition, a major convention, or are trying to obtain approval from a semi-pro costuming group like the Rebel Legion or the 501st you will have to make the jumpsuit from scratch. Why? Mara's jumpsuit has some distinct cording/piping that runs throughout the garment and is tough to find on ready-made pieces. Pam, of she-who-makes-lekku fame, has a some fantastic tips if you are trying to re-create this effect on your own.

If you're not aiming for quite that level of detail or are running short on time, you can purchase a jumpsuit. Just about any black full-body cat suit will do the trick so long as said piece has a zipper in the back or at the side. I purchased this literal cat suit from Amazon, then removed the hood and sleeves by cutting apart and rebuilding the joining seams. Major online retailers like Amazon carry a wide array of similar garments. EBay also has a few great suits, including this pricy but accurate entry.

Cape: Mara tends to wear either a cream-colored hood or a slightly darker tan cape that ends around knee level. I re-created the cape using two yards of backing satin in "Latte" from Joann's Fabrics. Backing satin will be labeled as exactly that and is a great choice when you're building a science fiction costume. It's inexpensive, durable, fairly lightweight, and has a nice sheen to it. The only thing it doesn't do well is stretch and the fabric is prone to fraying at the edges if you leave the hems unfinished. 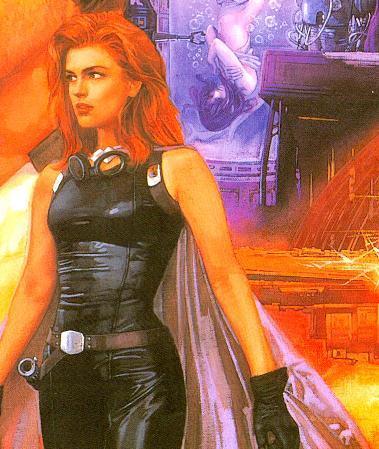 To make the cape, fold the cloth in half length-wise. If this is freshly cut fabric (i.e. you had the salesgirl at Joann's cut you off two yards), you'll likely need to trim at least 2 of the edges so you'll end up with a square. Pin the edges that you know are even (typically the top and the folded edge), then make your cuts to the other two sides until you have your square. 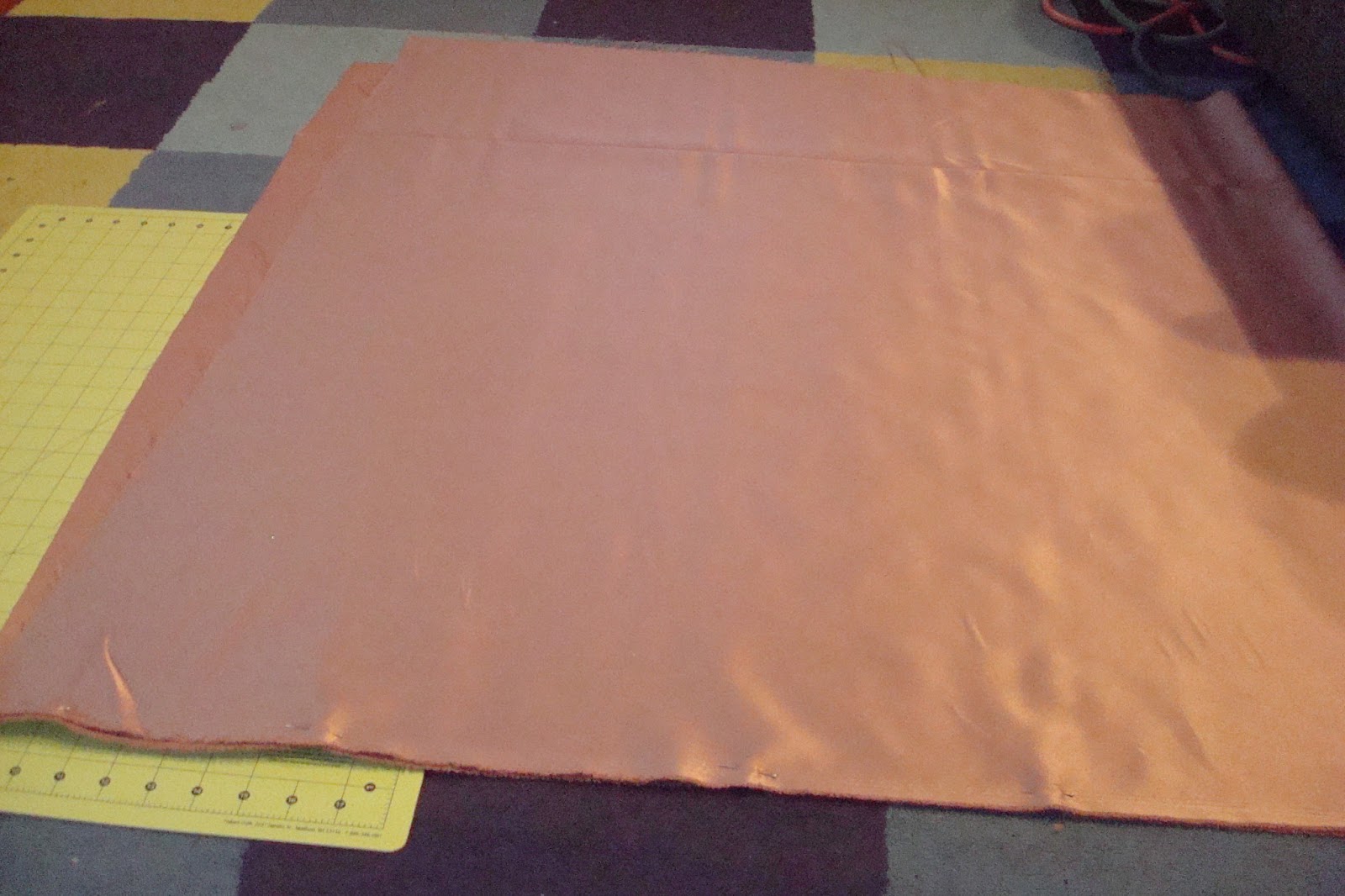 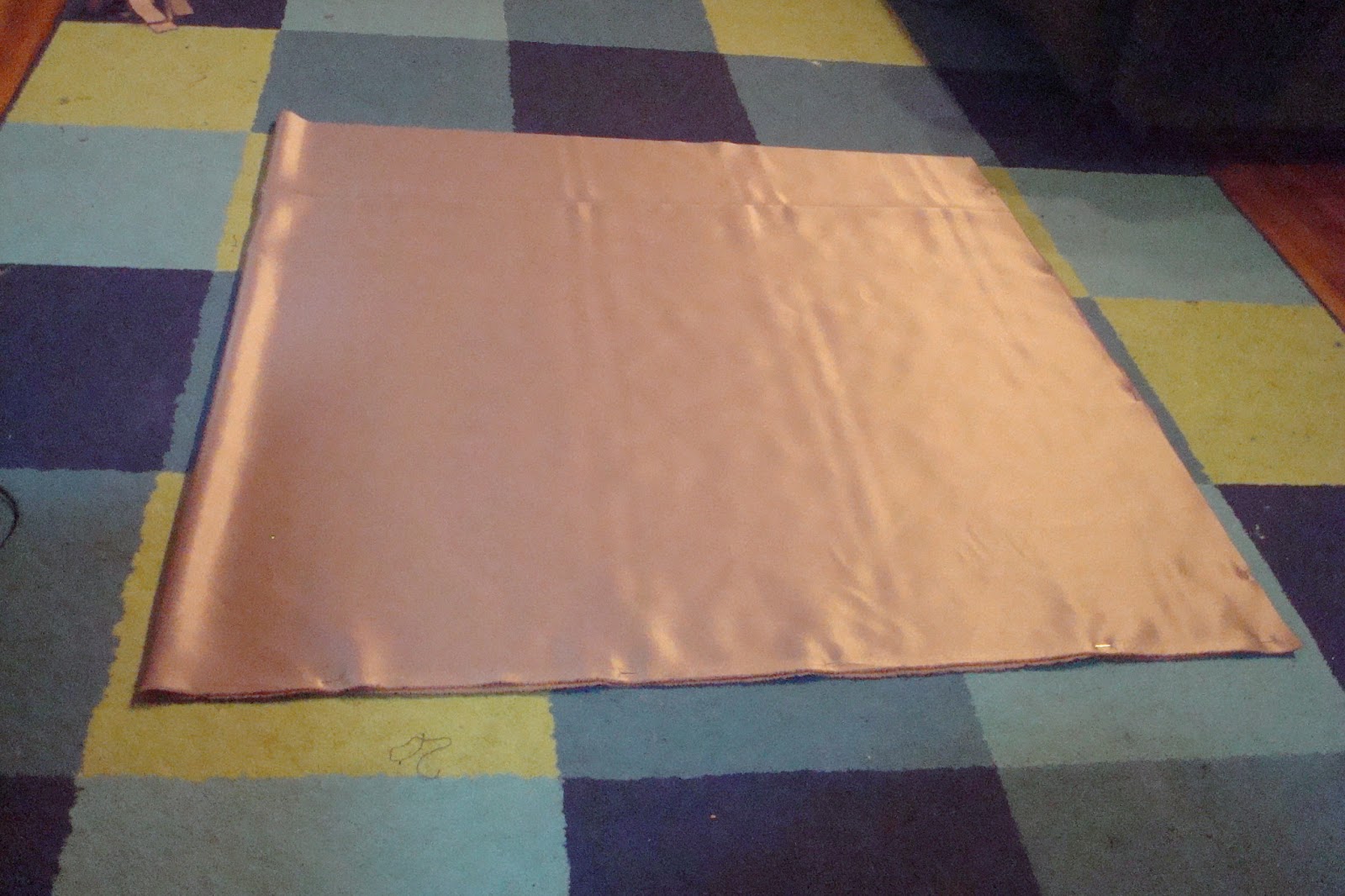 Once you have a square, remove the pins from the folded edge and transfer them across to the just-cut edge immediately opposite the fold. Now, using whatever method you prefer, determine a 45 degree angle beginning at the corner of the top and folded edges and stretching across to the opposite corner. Using this angle as the "swing point" (like on a compass), draw a quarter of a circle between the folded edge and the top of the cape. This is going to be where the cape eventually lays against your neck. I started with a three inch (7.62 cm) radius for this quarter-circle and made small subsequent adjustments. If you're at a loss as to where to get a good approximate radius, have a friend measure straight across the back of the base of your neck and divide that number by two. 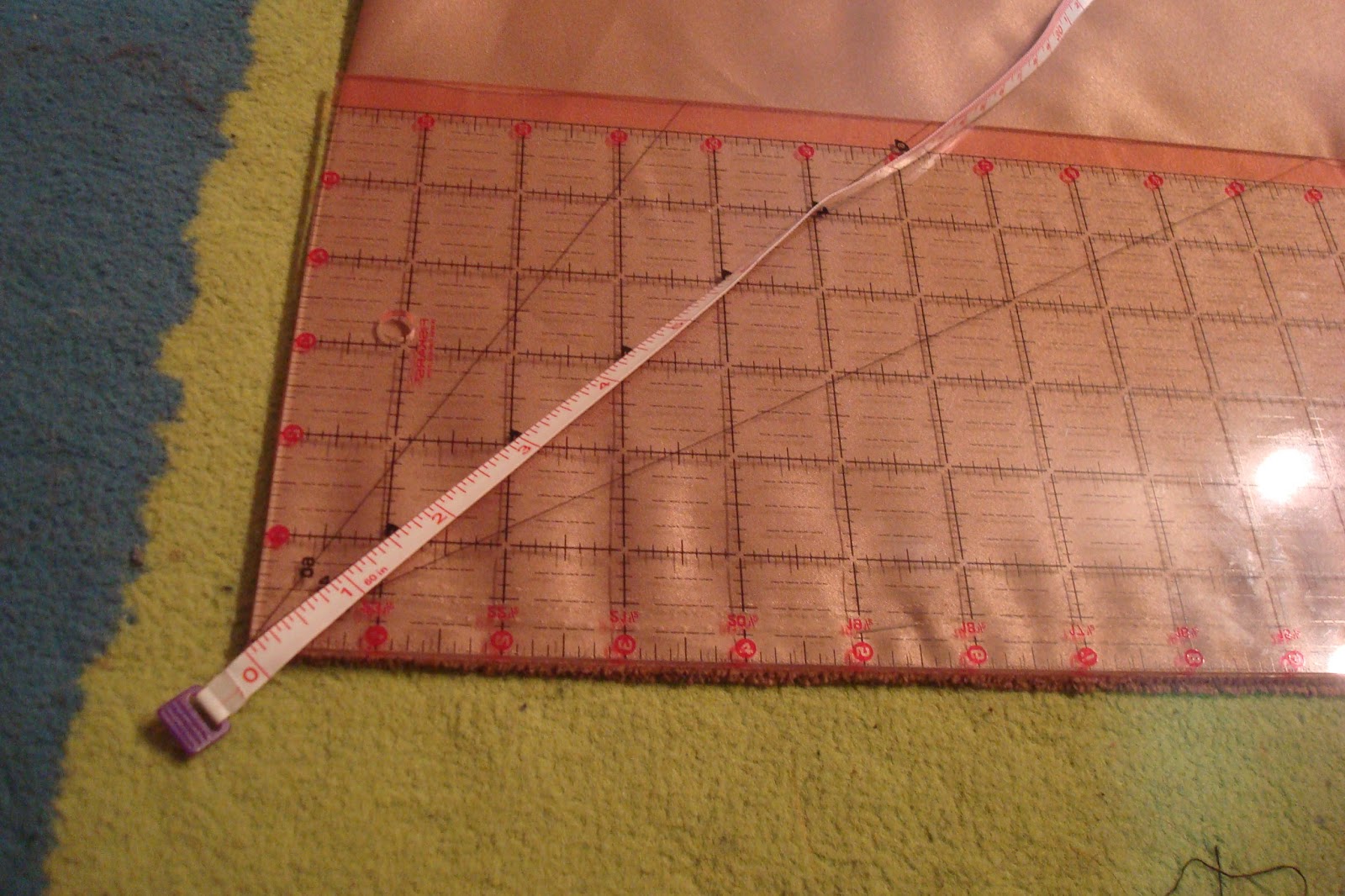 Cut out the quarter-circle once you're satisfied with the measurements. After this, you can finish the seams with a sewing machine or with careful application of hot glue (rolling back the fabric a small amount and gluing it in place). Either glue or sew small segments of cord at the opening of the neckline so you can tie them together to wear the cape. 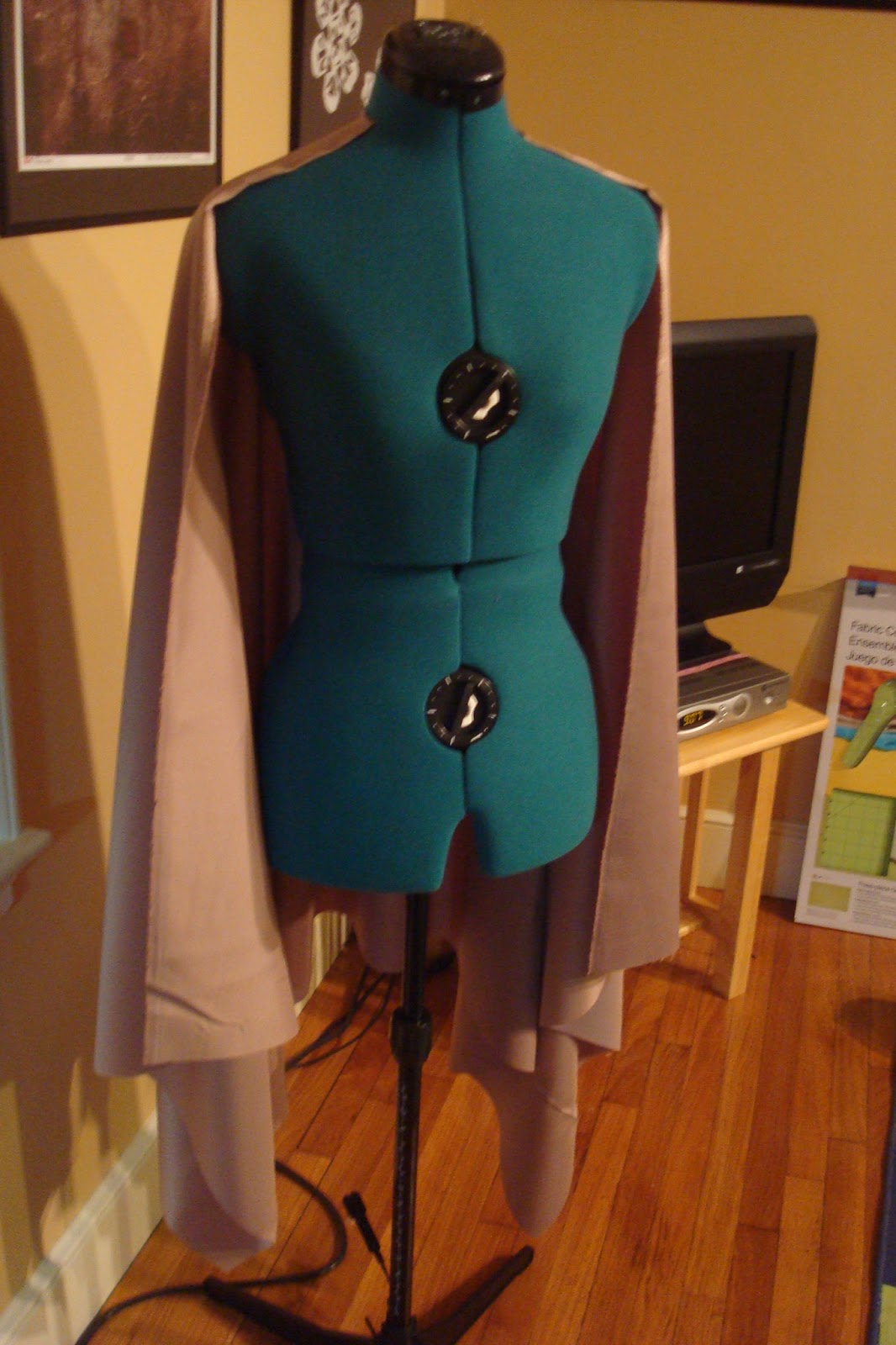 Utility Belt: The belt itself actually has two segments: a piece that goes around the waist and a harness that encompasses both arms at the shoulders. For both belts, I began with two sheets of light brown upholstery leather from the same company that provided the leather to make Aayla's utility belt. I cut three strips (1.5 inches [3.81cm] wide by 24 inches [60.96 cm] long) and sewed one and a half strips together for the primary waist belt, then appended the remainder to drape along my right side. 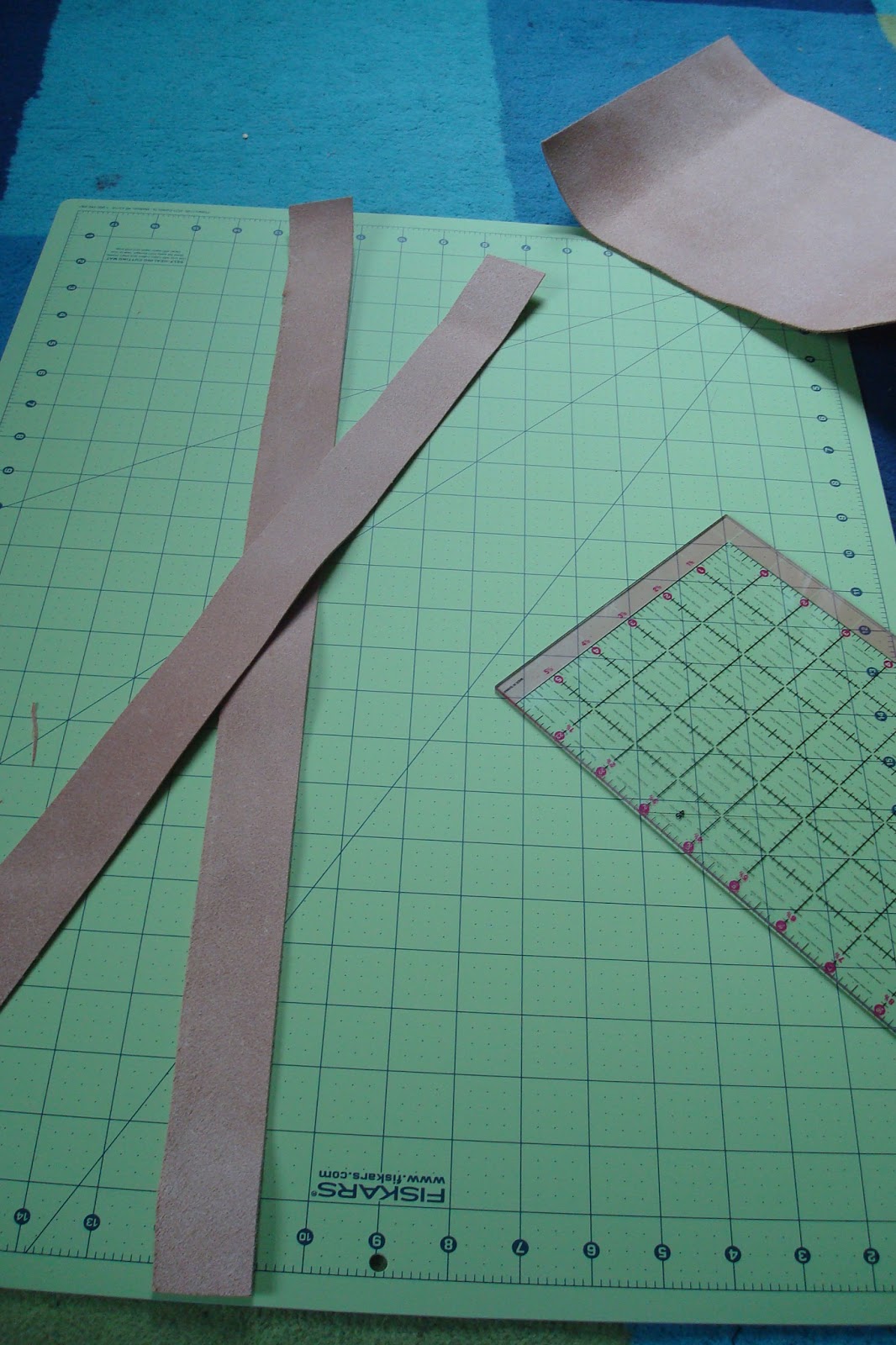 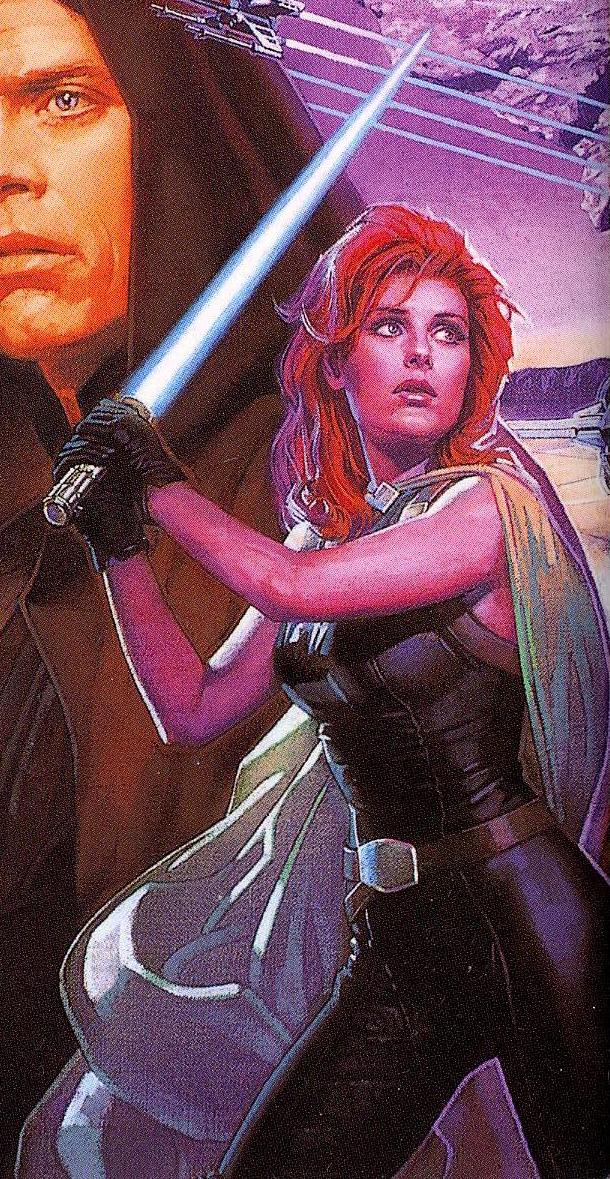 For the shoulder harness the strips needed to be slightly narrower (1 inch, 2.54 cm) in order to allow for freedom of movement. The same basic process of sewing to splice the strips together came into play. If you have some on hand, reinforcing the seams with a small amount of rubber cement is almost always a good idea when making these sorts of leather items.

Goggles/Gloves: Unless you happen to be adept at resin casting or plaster molding, you'll likely have to purchase a set of goggles. Fortunately, many sporting goods retailers sell futuristic-looking models fairly inexpensively. I went with these from Amazon.

The gloves are another item you could make yourself, but could also just as easily purchase as they're fairly generic leather gloves without distinctive markings. One thing to note: Mara wears cream-colored gloves to match her hood, if she's wearing that, and black gloves if she's donning her tan cape.

Other Accessories: There are a handful of geometric silver belt buckles/clasps that Mara tends to wear. I re-created these by cutting the desired shapes into sheets of crafting foam, then spray painting them a matte silver.

For shoes, Mara wears plain black leather boots with a square, modest heel. These are another item you could buy, since there's nothing specifically Star Wars about them.

Mara also either carries a snub-nosed blaster pistol or a lightsaber. She's been shown to use lightsabers with blue, violet, and red blades in various media, so you can take your pick (note: the red blade was used while she was still the Emperor's Hand. If you're cosplaying as light side Mara, you should stick with a blue or violet blade.)

Lastly, Mara is known for her full head of red-gold hair. This has been depicted as everything between a light coppery color and a deep auburn, so there's considerable leeway. So long as you end up with unmistakably red hair, you should be good to go. If you wanted to be especially adherent to canon (yes, I'm calling it that until Disney says I can't), Mara has striking green eyes as well. Colored contacts are surprisingly inexpensive, in some cases even free, and take only a bit of practice to get the hang of wearing.

Feel free to send questions, comments, or pictures to any of our social media sites (or in the comments field below)

As always, best of luck and happy cosplaying!