Posted by Kel
This time of year rocks serious socks for a whole host of reasons: the weather is warm, but usually not unbearably so, allowing for entire days to be spent on the beach. Schools let out, daylight abounds, and all this factors in to everyone seeming to be in better overall spirits.

Related Aside: A word of apology for all those reading from the Southern Hemisphere.

This period of almost-summer is especially dramatic here in New England. The landscape literally transitions from withered and barren to lush and alive in a matter of days. A few weeks later, we're treated with the first offerings of local produce. I know this might seem kind of hokey, but, after months of darkness and a winter characterized by storms that dropped 3 or more feet of snow (~1 meter), it's particularly wonderful to be reminded that these surroundings are wonderfully productive when they're not frozen and buried.

The featured recipe is a classic combination of ingredients whose growing seasons happen to follow one another in close succession. This storied pairing earns the 'classic' moniker for a reason. You get your sweet and your sour, your crunchy and your soft all in a single bite. Can't go wrong there. 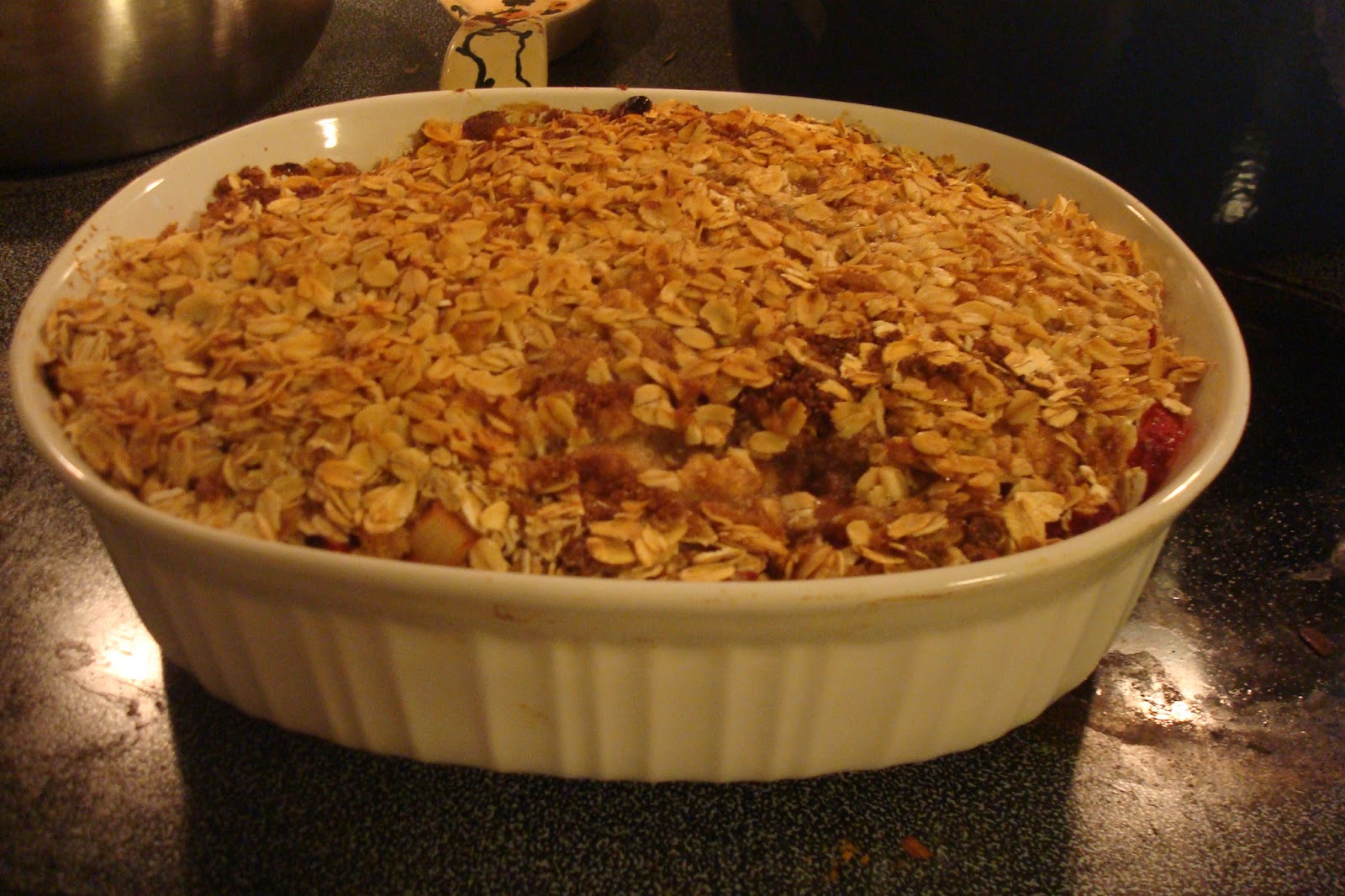 Until recently, my thoughts on rhubarb were: Look at you. You are the flamboyant sibling of celery. You seem fun, you're even fun to say...hehehe...rhubarb. I just wish I knew how to cook with you! Fast forward to New Year's Day 2012. Every year, as part of the whole making-of-resolutions business, I select one ingredient and one cooking technique to focus on during the year. Kel's Rockstar Ingredient of 2012 was rhubarb and I'm very glad that it was, as it has since become one of my favorite things.

Skip ahead to the FAQs section if you'd like a bit of information on how to select good rhubarb. Even though it plays a time-honored role in the featured recipe, it's fairly versatile and chock-full of nutrients.

This recipe is simple on the process and huge on the results. So, without further ado, strawberry rhubarb crisp!

Difficulty: Easy
Availability of Ingredients: Seasonal
Gadgetry: None
Feeds: 4-8 nerds
Time Till Noms: About 30 minutes of preparation and an additional 15-20 minutes of baking time 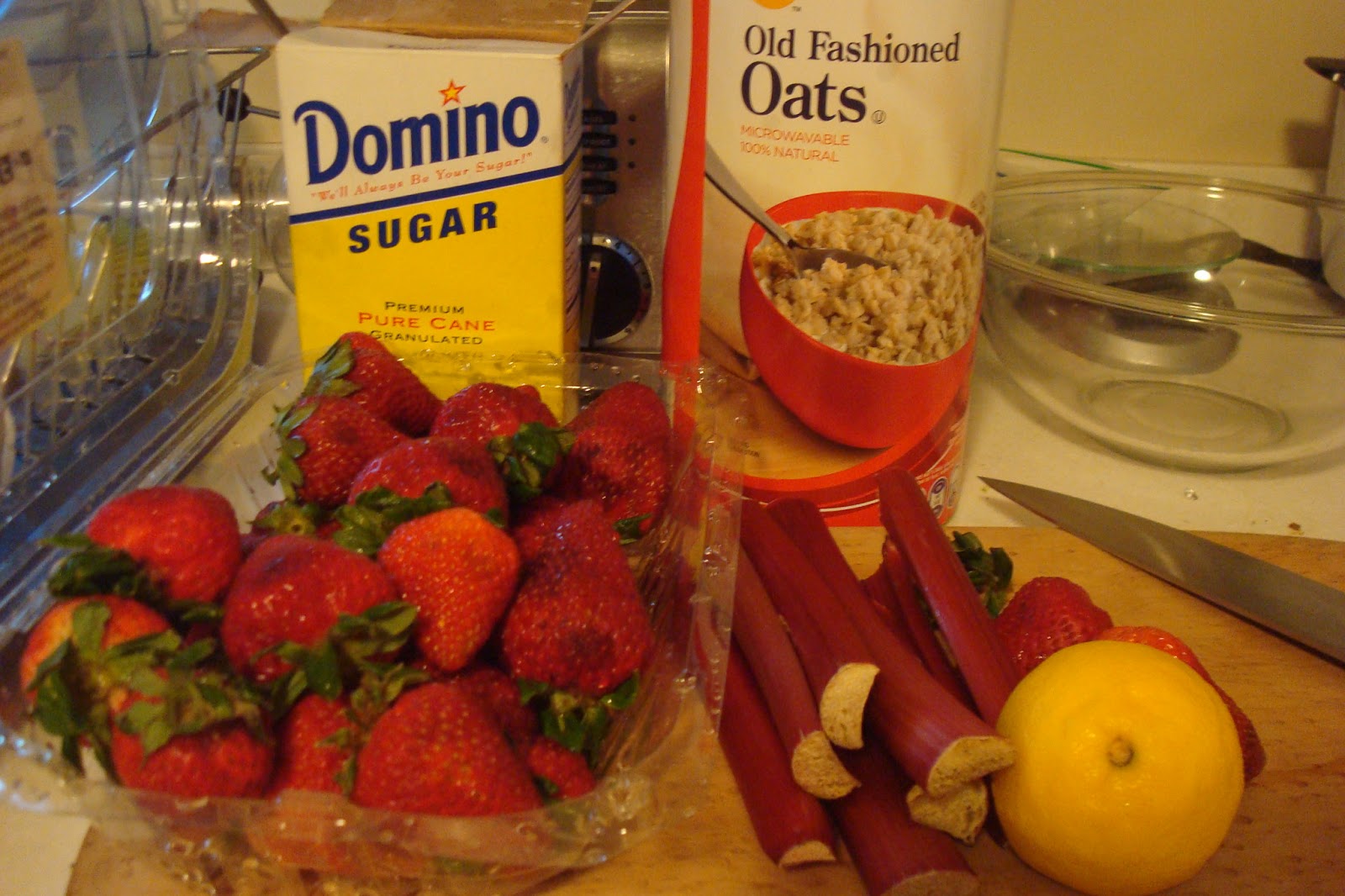 Ingredients
For the Filling

1 cup of brown sugar
1.5 cups of whole oats
A few shakes of cinnamon and nutmeg
4 Tablespoons of melted, unsalted butter

Step 1: Rinse the strawberries in cold water, then shake or pat them dry with a cloth or paper towel. Remove the leafy green tops and stems. Cut the strawberries into slices. Slices should be thick enough to be opaque if held aloft but thin enough to garner 4-6 slices per berry. Place your strawberry slices into your large bowl*. 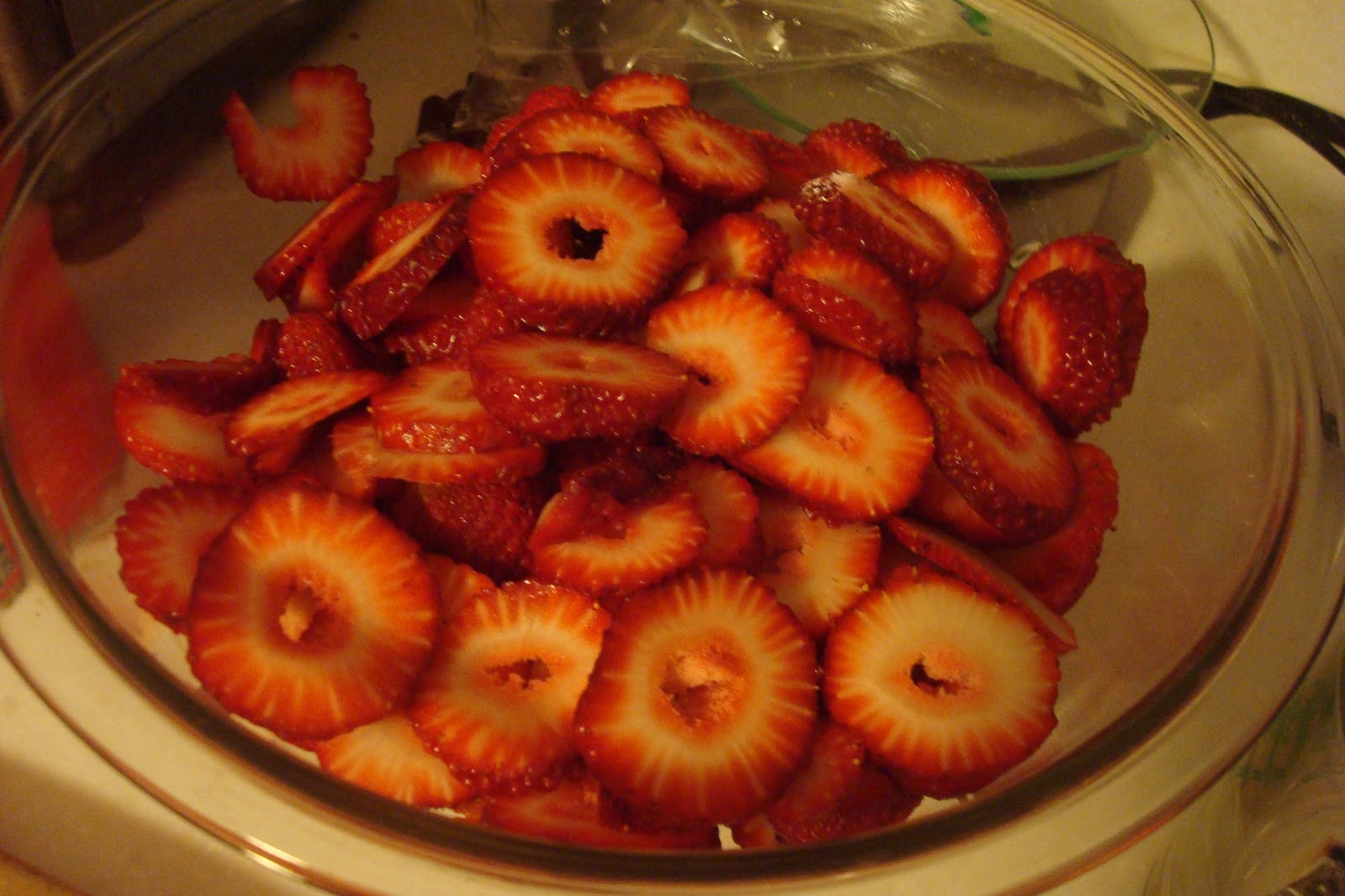 Step 2: Once all the berries have been sliced, wash and dry the rhubarb stalks. Trim off any leaves and/or dry ends from the stalks. {Note: ALWAYS make sure you remove the leaves and throw them away. They contain high levels of oxalic acid, which is toxic to humans.} Cut the rhubarb into small chunks, removing any blemishes or imperfections, then toss into the bowl with the strawberries*.

*If you are using field grown or primarily green rhubarb, do Step 2 first. Add the granulated sugar and toss with the rhubarb pieces, then go back and slice up the strawberries. Doing this will temper the intense tartness of the rhubarb. Discard any liquid that pools beneath the rhubarb before adding the strawberries. Add another three teaspoons of sugar to the rhubarb/strawberry mix. If, however, you love tart or sour things feel free to ignore this note and proceed through the steps as they're listed. 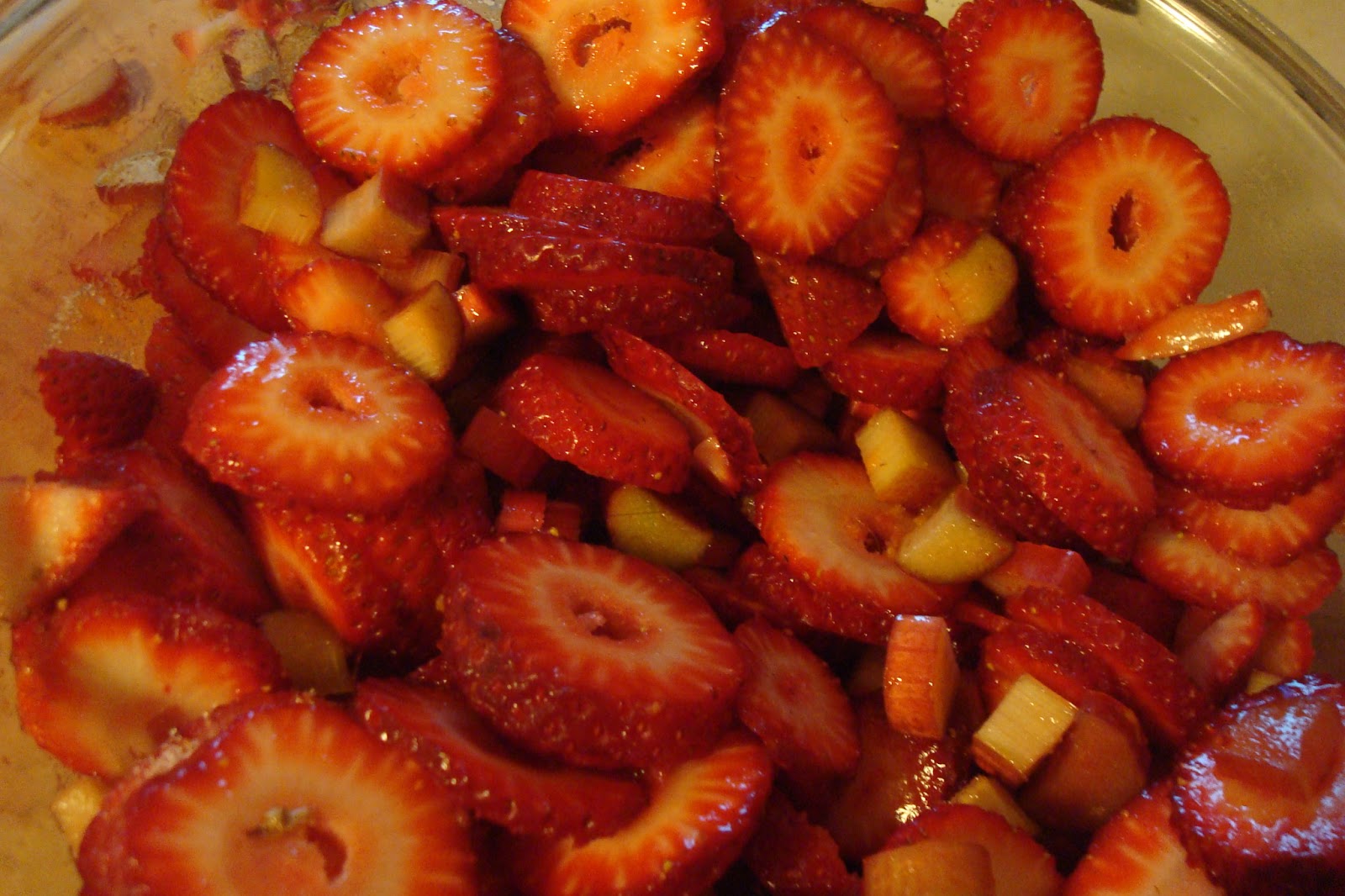 Step 3: Sprinkle the granulated sugar, salt, and ground spices over the rhubarb and strawberry pieces, then grate the rind of half of one lemon into the mix. Squeeze the juice of the half lemon over the fruit mix, then blend the ingredients together by gently folding them with your wooden spoon/spatula.

Step 4: Spray your baking pan with a light layer of cooking spray, then transfer the strawberry rhubarb mix to the pan, using your wooden spoon to spread the mix so it is evenly spaced throughout the pan. 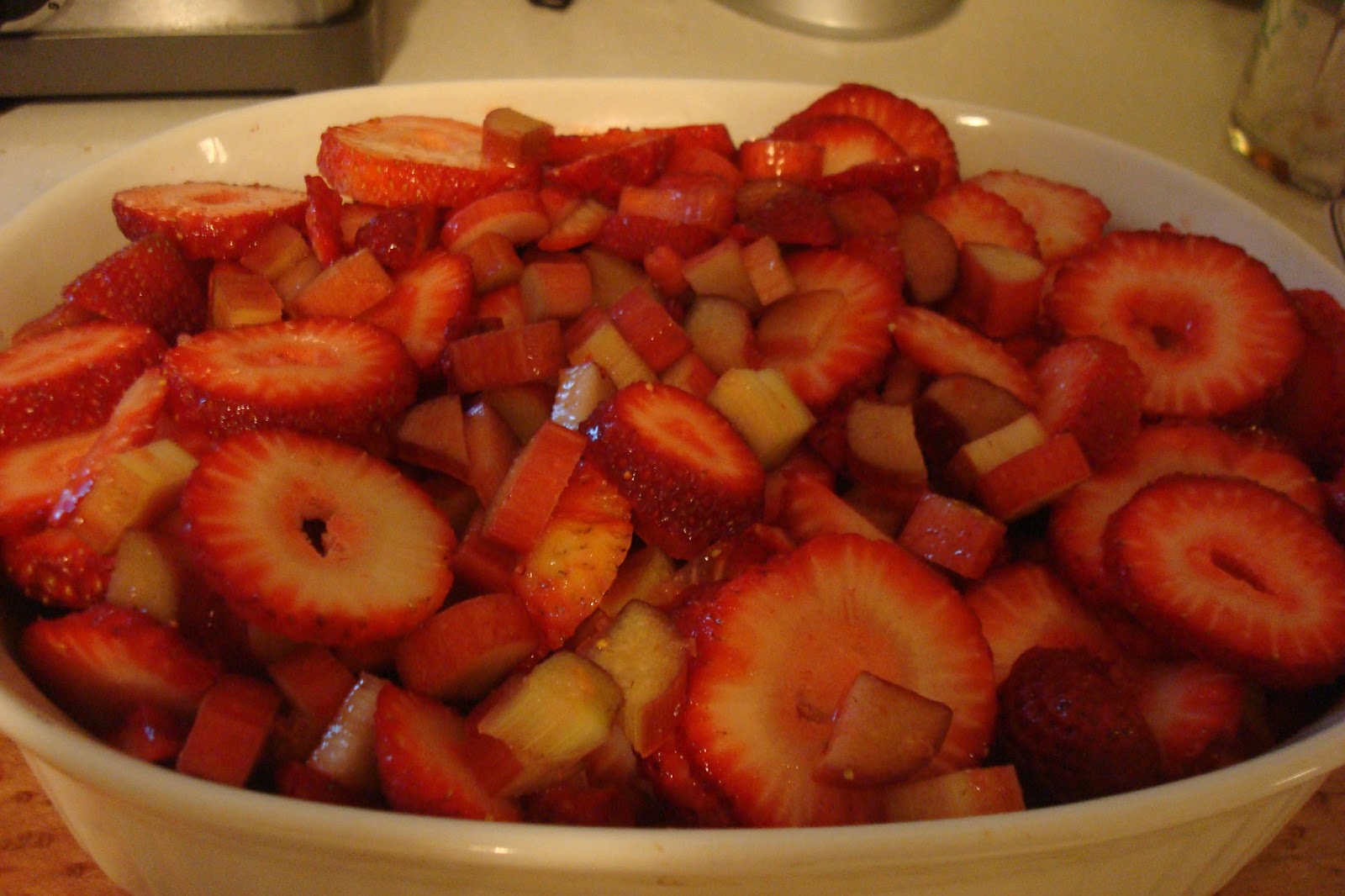 Step 5: Add the brown sugar, rolled oats, and spices to your smaller bowl and, using a fork or other utensil, toss the contents together so the resulting mix is as uniform in consistency as possible. Gently shake the mix over the strawberry rhubarb base, covering the latter with the former as evenly as you can. 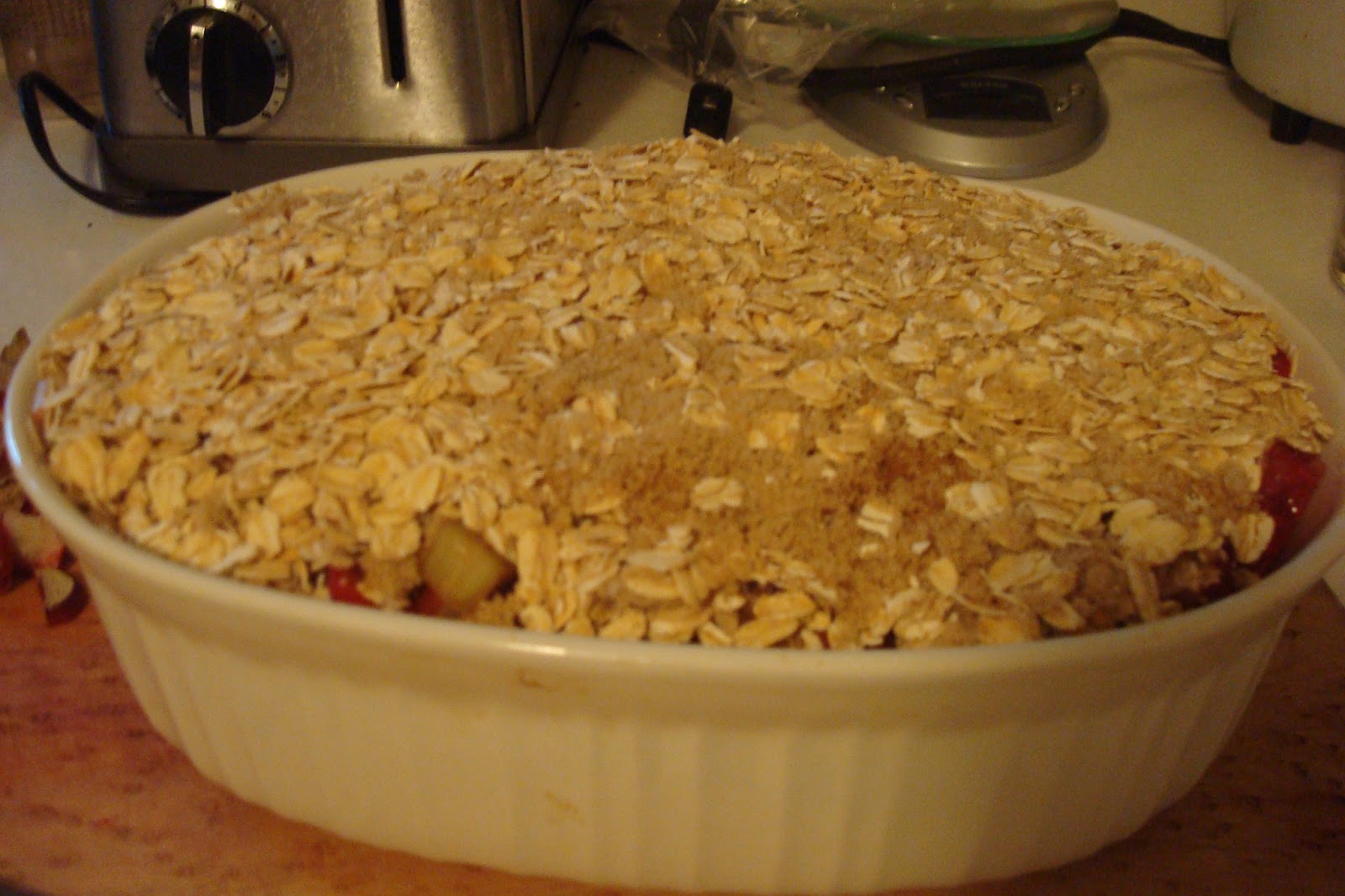 Step 6: Melt the butter (you can do so either on your stovetop or in a microwave), then drizzle it over the crisp. Place the crisp in the oven and bake for 15-20 minutes (until the topping is a golden brown). Let the finished product cool for at least 10-15 minutes before serving. Woot! You have yourself some strawberry rhubarb crisp! 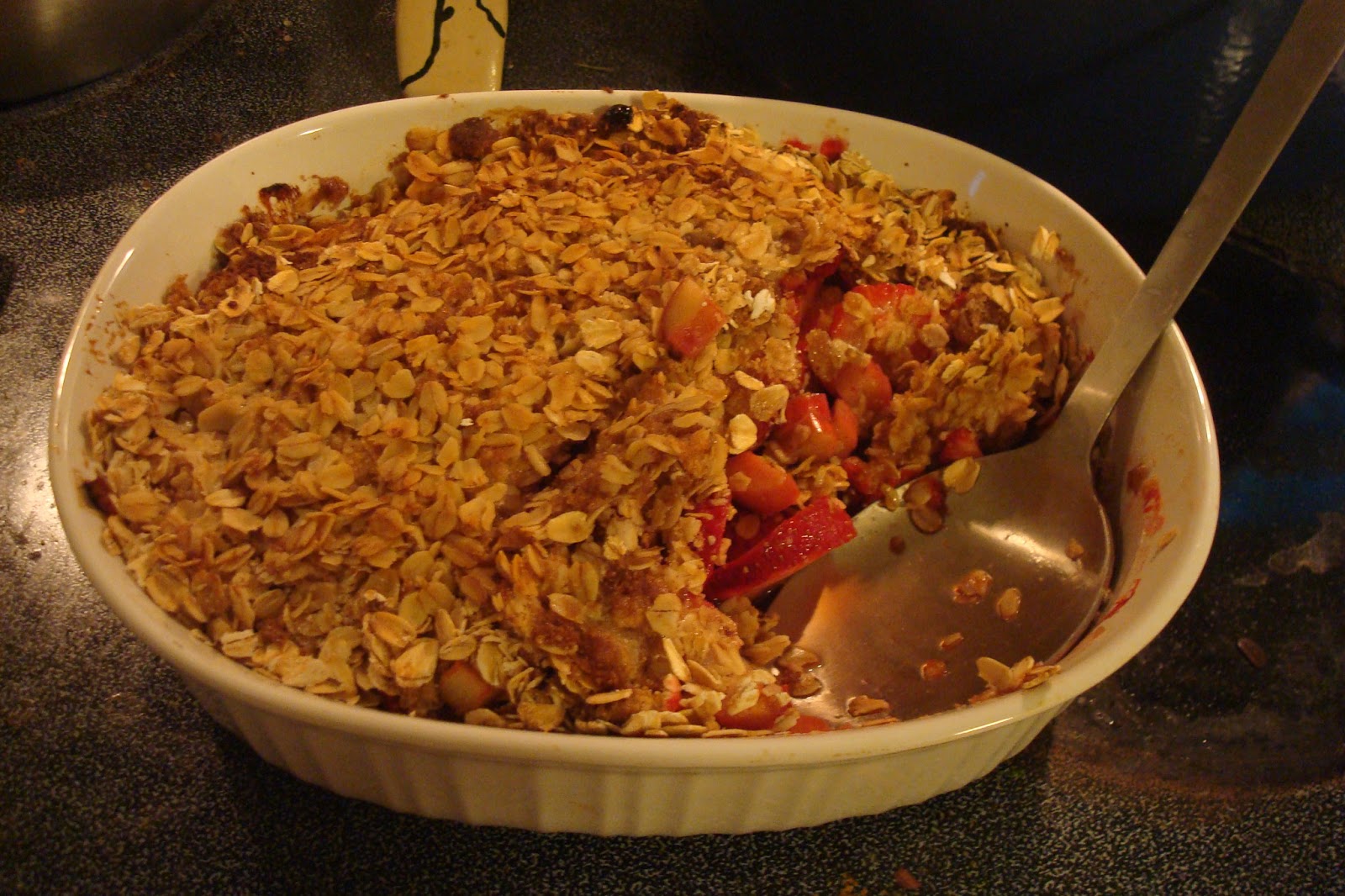 Ok, I've never cooked with rhubarb before. How do I know go about buying it or seeing if it's any good?

Many supermarkets will carry this odd-looking vegetable (yes, it's a veggie) for several weeks from late spring to early summer (Northern Hemisphere). Depending on where you live, farmer's markets are another great spot to procure rhubarb. You'll likely see it strategically placed alongside the strawberries, though it may also reside near the celery, the large leafy greens, or in that awkward spot for miscellaneous produce that doesn't fit neatly into broader categories. A good piece of rhubarb will have bright, rich coloring and be firm to the touch. You'll want to avoid stalks that are rubbery, split, or have large blemishes/dry spots.

Some of these stalks are bright green but others are practically magenta. Are the green ones unripe?

Technically stalks of both colors are ripe. Unlike other vegetables, the hue of the rhubarb is not indicative of its ripeness. However, thicker or greener stalks are a good sign that the rhubarb was grown outside in a field whereas thinner, pinker specimens were likely grown in a greenhouse.

Does it make a difference which kind I choose? Is one type better?

Both kinds are perfectly fine. Field grown rhubarb tends to have a bolder, tarter flavor and hothouse rhubarb is usually a bit more mild. I personally find that a blend of both kinds produces the richest flavor and will try to buy locally grown rhubarb as frequently as I can.

Do I need to peel the rhubarb?

Not necessarily. If you're using field grown rhubarb you may come across a stalk that's a bit tough to cut into (the outer skin will resist and come apart in celery-like threads). Should this happen to you, take a sharp knife and, beginning at either end, carefully wedge the blade under the skin and lift it enough to get a grip on it, then pull the skin away with your fingers.

Can I use minute or steel-cut oats instead of rolled?

Definitely, though you may have to add 5-10 minutes to your baking time or blend rolled/minute oats in if you're using steel-cut oats. After a bunch of trial-and-error, I've found that most types of oats will work and you could probably attempt this recipe with other types of whole grains.

As always, experiment as you see fit and have fun! Best of luck in your culinary adventures! 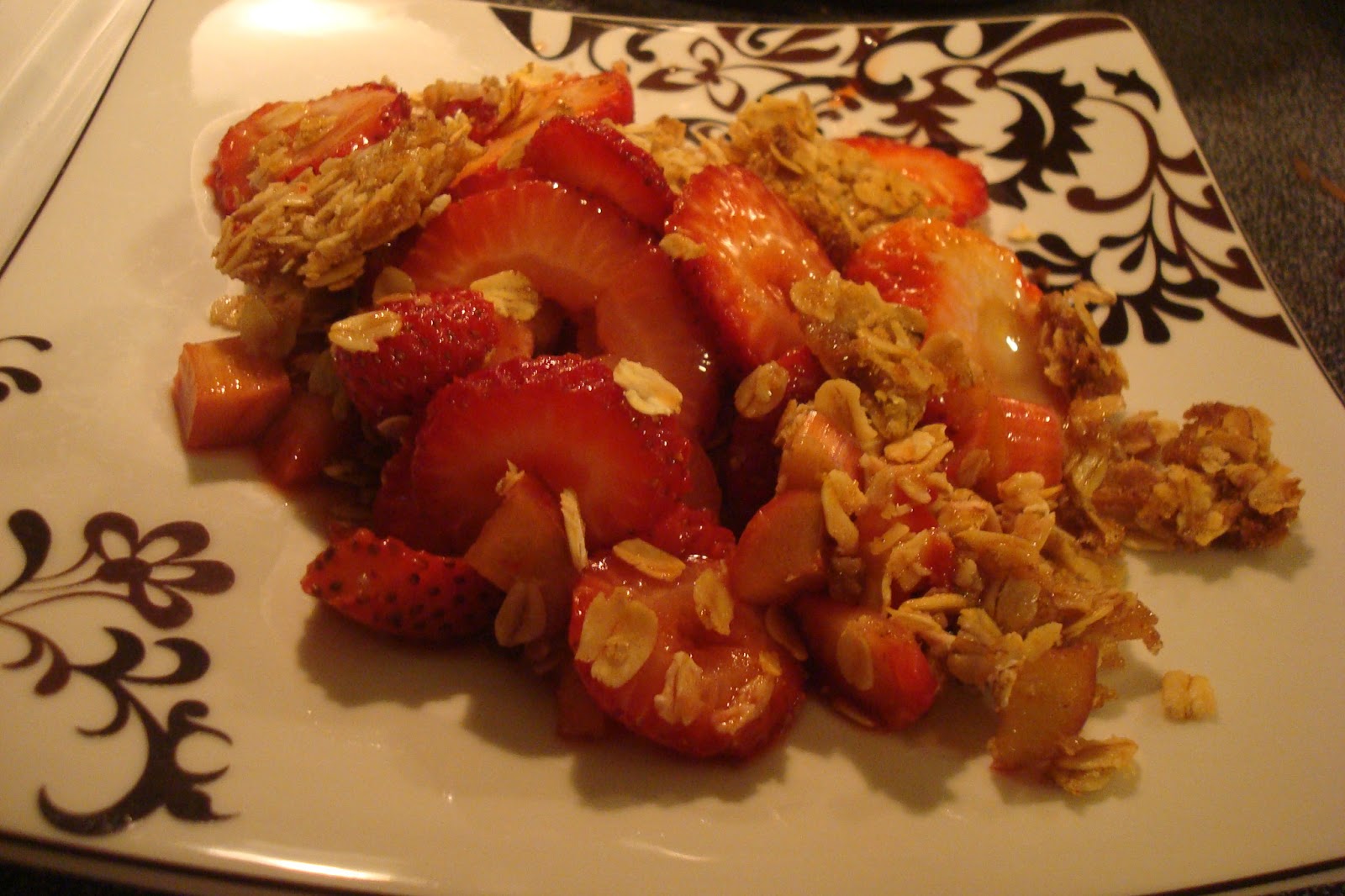