Cosplay: Sucks to Your Unrealistic Standards! (Or How to Avoid Convention Trolls)

Posted by Kel
The cosplay scene has been my creative and convention-structured home for several years now and it's something I frequently receive questions about, particularly when I'm just getting to know someone. Though the conversation partners differ, the actual layouts of these dialogues tend to be remarkably similar. After a brief recap of how I came to the hobby and some of the preparations generally taken during the costume construction process, I'll try to spin the exchange about and ask my chat partner their feelings on getting into cosplay. 95% of the time the responses take the form of the world's saddest game of Mad Libs. It's a whole bunch of:

For the first sentence, the most common fillers of that critical blank are: pretty, attractive, crafty, talented, in shape, thin.

For the second, the descriptors that appear most often are: busy, out-of-shape, fat.

That, right there, is tooth-gnashingly frustrating, because the motivations behind most of those statements are rooted in the worst behaviors our little subculture exhibits. We've spoken before about how some of our brethren have considerable trouble differentiating the digital world from reality. Combine this with the stereotypical-but-accurate undercurrent of social awkwardness and the absurd compulsion shared by some of our peers to sniff out and expose other individuals as "fake geeks" and you've got a decidedly unwelcoming constituency. 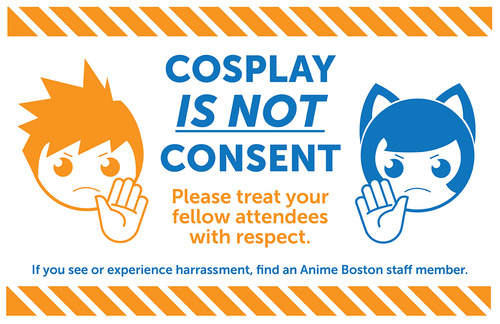 Yeah. but Kel not every nerd/geek does that sort of thing. Most of us are at a convention to…you know…enjoy the convention.

And that's probably true but, as we've also discussed, it only takes one thoughtless act of cruelty or mean-spiritedness to cast a terrible pall on someone else's con-going experience. We're also a group of people renowned for our demanding standards, unabashed ability to faultfind, and fervid attention to detail. Those characteristics constitute our inherent base. Furthermore, even if the (sarcasm on) Inquisitors of True Geekdom (sarcasm off) are the minority, they are also nerds/geeks. Think of them as the whacked-out fundamentalist component of our cultural denomination. They're embarrassing and seem hell-bent on creating the worst possible public image for Nerdery, but they are still us.


Ok, even if you strip out the Inquisitors, the criticality, and the pervasive lack of…ehm…diplomatic tact you've got the stark reality that the vast majority of the characters from just about every sub sect of Geekdom are, for all intensive purposes, physically identical. Unless you're aiming to replicate something like an Ithorian or  Kosh Naranek, you're likely looking at a roster of primarily tall, white, very fit/thin, good looking characters. If you don't happen to naturally possess all these qualities and have spent more than ten minutes with even a small group of nerds it's understandable that the notion of re-creating a canon character might give you pause.

This does NOT, however, make you a bad cosplayer nor does this preclude you from cosplaying.

Is it ridiculous that the wealth of personas from all segments of Nerdery are so sorely lacking in diversity? Of course.  Is this the unfortunate reality of most current geeky properties? Yes. That is slowly changing, but is still, lamentably, the case.

Can you have non-model looks/stature and still have an enjoyable cosplaying experience? You better believe it.

Regardless of your physique or crafty abilities, my first and foremost piece of advice to any costumer is to plan, plan, plan. Making an informed appraisal of the project and your eventual audience can not only help save you time and money, but also drastically cut back on potential encounters with convention trolls.

First, some self-reflection is in order. Why do you want to cosplay? Aside from the Inquisitors of True Geekdom, what has prevented you from making a costume to this point? You may want to format your answers in your own Cosplay Manifesto, if only to help crystallize your motivation for a project that could potentially suck up a considerable amount of time and resources. Additionally, you have to be honest with yourself about your personal tolerances. Does your source character tend to show a lot of skin? Do they wear high heels/a long train/large headpiece/a lot of makeup? Will you be toting around a large or heavy prop?

Once you get these considerations out of the way you can focus in on the actual construction process. Only you can make an honest estimation of your crafting abilities. To be perfectly blunt, cosplay is not something you can do halfway. The mantra "Go Big or Go Home" definitely applies here. A poorly made costume will make a fool of even the best-looking con-goer. Seriously, the most effective way to avoid unpleasant convention cosplay encounters is to have a solid, impressive costume.

In conjunction with all of the above (as if that wasn't enough to think about on its own), try to consider the convention at which you want to debut your finished work. About how many people generally attend that convention? Where in the convention space itself do you intend to spend the majority of your time while in costume (the dealer hall, perimeter, etc)? Are you going to wander about freely or are there events/contests you'd like to participate in?

The two most important pieces of advice I give to anyone intending to cosplay are the following:

-    Unless you are extremely familiar with the convention itself, DO NOT COSPLAY ON THE FIRST DAY. Spend that first day walking around, taking in the sights and making little mental notes like, "These halls are surprisingly roomy despite the crowds; I should have no problem getting around with my wings deployed," and, "By the Odin-son, there is not a single bathroom on this floor."  Most importantly, try to get a feel for the convention crowd. Are there many other cosplayers? Are your fellow attendees a generally gregarious bunch or are you getting a sketchy vibe? Consider your costume and consider the people around you. Full Stop; then make an informed decision about whether or not its a good idea to proceed. It is FAR, FAR better to nix a cosplay and enjoy the convention experience than to plunge ahead into a hostile crowd and potentially have an unpleasant run-in.
-  If it is at all possible, DO NOT COSPLAY ALONE. Having someone meander the halls alongside you can be both a logistical boon (especially if your costume doesn't feature any pockets) and a powerful troll-dissuading agent. The troglodytes who will try to confront you at a con tend to adhere to schoolyard bullying tactics and thus will focus their ire on easy targets, which brings me to my conclusion…

No matter what you weigh or how you look, if you've put the work in and have made a costume that you're proud of then own that experience. It sounds hackneyed and trite, but the following is wholly, entirely true: someone can only take you down if you let them.

A nasty con-goer draws unfavorable references to large marine mammals because you're not a US size 2? Sucks to them. An ignorant attendee uses transgender terminology as an insult because you don't adhere to an unrealistic standard of feminine/masculine beauty? Sucks to them. Spitting vitriol is easy; creating an excellent costume and walking the convention halls is not. It's no coincidence that you almost never see an Inquisitor actively cosplaying.

Your cosplay should be an expression of you; it should be something that makes you happy, gives you a creative outlet, and actively enhances your convention attendance. Though trolls and Inquisitors will likely continue to feature in nerdy gatherings, there's plenty you can do to take the sting from their would-be barbs. Follow your passions, display great workmanship and to the Nine Hells with the haters.