Hi guys! I'm back! For real this time, I promise. Where was I? Well, every so often you'll get snippets of my kvetching about how work morphs into this massive Elder Hydra that then proceeds to consume nearly all free time for a period of 2-6 weeks. April was that epic struggle on steroids. The last time the battle was that feverish was because the Hydra received a historically enormous buff (i.e.  the largest bankruptcy in U.S. history) . This time the conflict wasn't even event-driven...more like a series of zemblanitous coincidences. Side note: zemblanity is an awesome, if somewhat sad, word. It was literally as though everyone in my party could roll no higher than a 3 and all environments and NPCs were having a similarly rough go the dice. Long story short, the Elder Hydra has finally been dispatched and life can return to some semblance of normalcy. Woot! 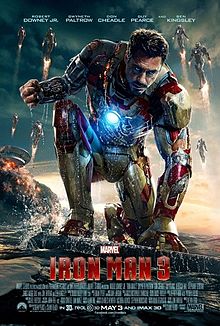 Part of this glorious return to life-as-usual was having free time again, which allowed me to jump into the summer blockbuster movie season with reckless abandon. Ok, so more like measured abandon, but you get the idea. First on the docket was the third installment of the Iron Man series. The release of the film was tailored to give it every possible advantage, a measure taken with the sole purpose of furthering the near-planetary inertia set in motion after the unprecedented success of the Avengers. Still, even after slating the film to release on the same calendrical weekend as its immediate predecessor (which itself coincided with the once-every-six-years confluence of Star Wars Day and Free Comic Book Day) and an enormous multimedia ad campaign it was abundantly clear that the Avengers was going to be an extremely hard act to follow.


Granted, not every movie can be a billion-dollar, box office busting history-maker BUT, if you're trying to further a multi-billion dollar Marvel-based movie universe, Iron Man was your best bet. The two earlier installments of Iron Man brought in over half of the approximately $1.3 billion total gross from the six "feeder" films that culminated in the Avengers ($630.4 million for Iron Man 1 & 2 versus $624.2 million from the other four movies). The title character is colorful and engaging in just about every way, due in no small part to the brilliance that is Robert Downey Jr. His performance is one of those surreal performances that seems to bring an intangible character to real physical form. It's akin to Peter Dinklage playing Tyrion Lannister on HBO's Game of Thrones. After you've seen the actors in those roles, it's nigh impossible to imagine their textual counterparts as separate entities. In the case of Robert Downey Jr., this is due in no small part to things like this:


Ok, yes yes. Disney/Marvel isn't stupid. Of course they're going to follow their biggest compilation with their strongest participating franchise. The question is, were they successful? Does Iron Man 3 follow through in its crucial momentum-enhancing role?

The answer is...sort of. Yes, only kinda.

- Were you/are you originally a reader of the Iron Man comics or were you introduced to Tony Stark via the films?
- If you were a follower of the comics, which did you prefer: the comics or the movies? (yes, you have to choose)

Why does this matter? Well, quite frankly, if you're even somewhat familiar with the comic book Iron Man universe then the movie is likely to grate on you as it handles a significant amount of rich, complex history with all the precision and care of an industrial chainsaw.

We're led to believe that the primary villain in the film is Tony's mythic arch-nemesis, the Mandarin. Without spoiling things, the Mandarin is neither what we're made to believe he is, nor really what he deserved to be. A perfect illustration of this garbled interpretation is the lack of the Mandarin's rings. We get a single rushed glimpse of them and they play no functional role in the story. And yes, these are the movies, not the comics, so a certain amount of creative license is to be expected when translating a property from one form of media to another. However, the depiction of the Mandarin not only trounces pretty much all of comic canon, but destroys nearly every possibility of either the character or the extremely important organization he's tied to (in the film, not the comics) making an appearance in any future Marvel movie. If you're versed in Marvel lore and have followed the films to this point, you may sit with jaw agape wondering why on Earth the writers/producers decided to do this.

There are plenty of additional canonical qualms, but they all can be summarized as follows: the movie attempts to placate fans of the comics with copious references while still engaging newcomers, but, in order to do the latter, it waters down the former into a barely recognizable state.

Comic foundation aside, Iron Man 3 is considerably darker and more serious than either of its predecessors. It differs from its forebears in another crucial way: it is a story about Tony Stark, not Iron Man. Set very soon after the events of the Avengers, we see Tony mired in a struggle with Post Traumatic Stress Disorder. He clings to both his sanity and his relationship with Pepper Potts by the barest of threads. While he loves building his trademark suits it becomes clear that this affection is derived from the comfort and security they provide their wearer, not because they could serve as the uniform of an active, crime-fighting superhero.

We get to see a suit on a would-be active crime fighter in the form of War Machine, now re-branded as the Iron Patriot. In fact, the suits and re-branding underscore the larger theme that the power armor is no longer something uniquely Tony. A handful of people aside from Stark get to don them and, at one point, they are the basis of what is perhaps the world's most baffling and expensive pyrotechnics display.

However, if the power armor is what's bringing you into the theater, then the progression of the plot may seem to drag. Again, this is about Tony and his tale here is one of classic redemption. Hero loses everything, hero must strive to regain that which has been lost and learn valuable lessons along the way. Iron Man 3 attempts to make this more multifaceted and contemporary by adding an overlay of horrific terrorism, but the timeless device prevails.

The majority of the cast turn in admirable performances. Ben Kingsley and Guy Pearce do an especially commendable job with their roles. There's plenty of action, loads of shiny technology, snarky one-liners, and oodles of explosions. Still, despite all the flare and panache, the movie seems a bit hollow. Though some of this is probably due to "Pixar Syndrome" and the fact that the Avengers cast an enormous shadow, the disappointment is rooted in something more. It's not just that we know the studio could have done better; it's that it seems as though the studio knew this too, but was either too overextended or simply didn't want to produce a cleaner, more coherent product. Instead they try to cram in far too much and support it on some pretty bare bones. There are simply too many logic gaps, plot holes, and seamlessly perfect resolutions to make this movie a truly satisfying third (and final?) chapter.

It's honestly not dissimilar to what you may have experienced after seeing the Dark Knight Rises, as many of the disappointments are rooted in the same basic causes. It's a letdown  not only because the story seems strained, but because we'd previously been privy to so much more.

In summary: Go in either braced for the extreme discrepancies from the source material or consciously ignore the comic history entirely and treat the movies as an entity unto themselves. It's quite a show, just maybe not the kind of show you were expecting.