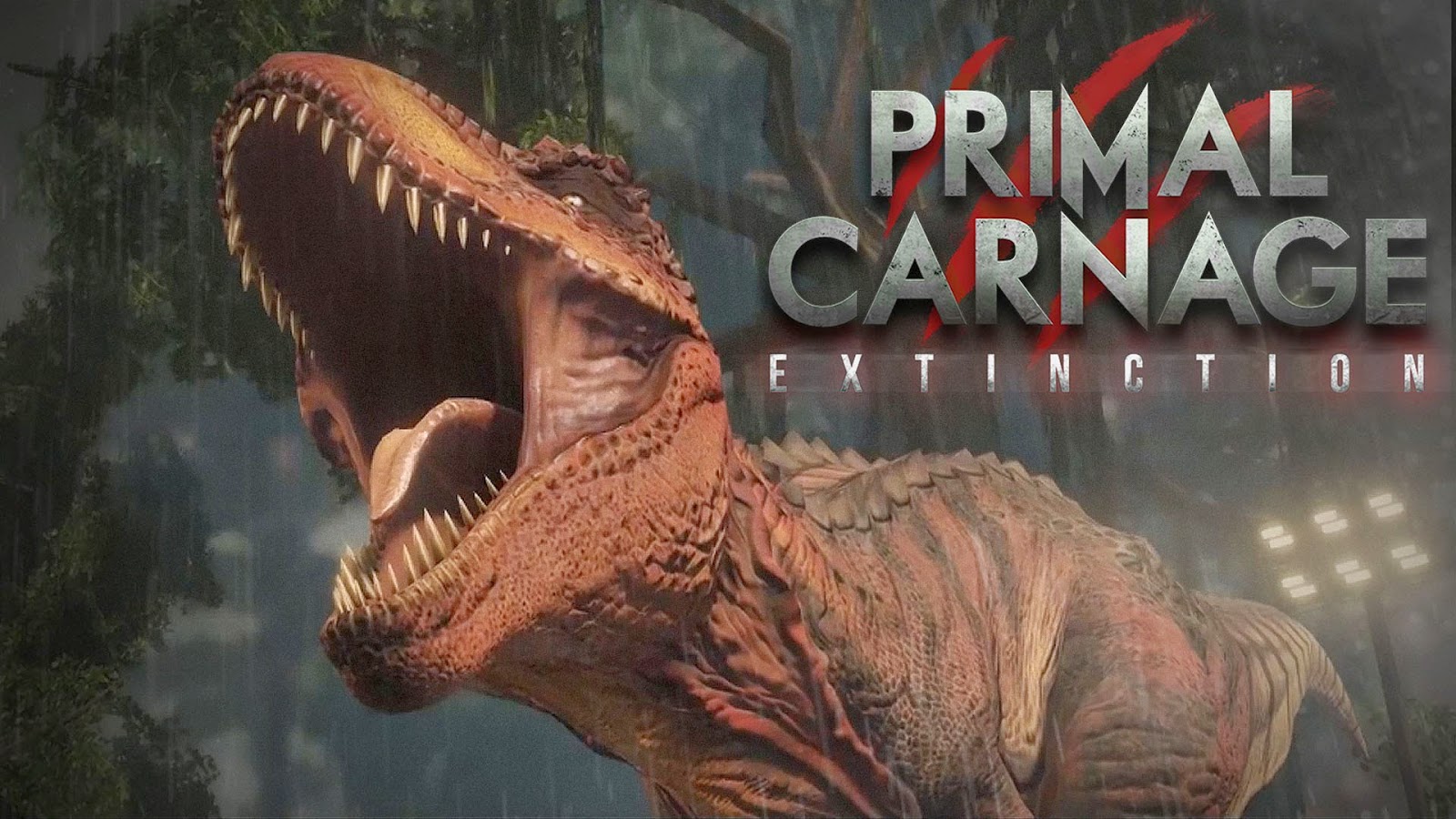 Dinosaurs - Check!  Pitiful Humans - Check! Fun and Engaging Gameplay - Errrr not so much....

First person shooters may not be my favorite genre, but I like to think I've certainly built up a reasonable level of competence and qualifications with quite a few hours logged in the Counter Strike, Team Fortress 2, L4D (341 hours), Borderlands (198 hours), and Far Cry (110 hours) franchises. As a child of the 90s, the movie Jurassic Park cemented my already expansive love of Dinosaurs (by the way, welcome back Brontosaurus!). These things should theoretically combine to make me the ideal candidate/target demographic for a game that bills itself as "class-based online multiplayer shooter featuring humans versus dinosaurs." Yet, much like the ill fated Isla Nublar, I am left wondering how did it all go so terribly, terribly wrong?

Recently escaping from Early Access, Primal Carnage: Extinction by Circle Five Studios was supposed to be a simple and FREE update to the code for the original Primal Carnage (2012), but somehow ended up as a $20 stand alone purchase. Full disclosure: I did not play the original, but asking around and reading old reviews it seems that it was a highly enjoyable and well-received game at the time of release, which only makes what I experienced in Extinction even more baffling.

There are 3 different game modes a server can be hosted on: Get to the Chopper, Free Roam, and a traditional Deathmatch mode. The first pits a team of humans against a clutch of dinosaurs where the objective is to capture a series of checkpoints. This, in turn, eventually allows the human to escape a compound which has been overrun by the rampaging dinos. Personally I found this to be the most enjoyable of the three modes but that's somewhat generous; maybe tolerable is the better word. Next up was something called Free Roam, sort of an Open World Roleplay type setting where you can roam free as either a human or a dinosaur. This intrigued me, as I do enjoy the stories and moments that organically spawn from this type of open world setting similar to what you'd see in DayZ or Rust. Encouraged by the fact that this mode had the largest number of servers being hosted by far, I was nonetheless disappointed with what I found there, which was nothing. I kept waiting, hoping for that moment where I would encounter another dinosaur and battle over territory or hunt/be hunted by pack of human poachers but it never came. In the last mode I tried a "Dino Warfare" map, which was just your basic team death match with both teams being composed of dinosaurs. This last point only served to highlight the lack of balance between humans and dinosaurs, which had originally been made unmistakably clear in Get to the Chopper. Instead of taking part in an epic clash between mighty dinos, I was treated to the same glitchy, buggy lagfest the other modes had been. It was like watching the game unfold via flipbook; for a non-indie multiplayer shooter this is unacceptable. For the record, the servers reported my ping as ranging from around low 40s to a high 67, so I don't think the issue was hardware on my end. 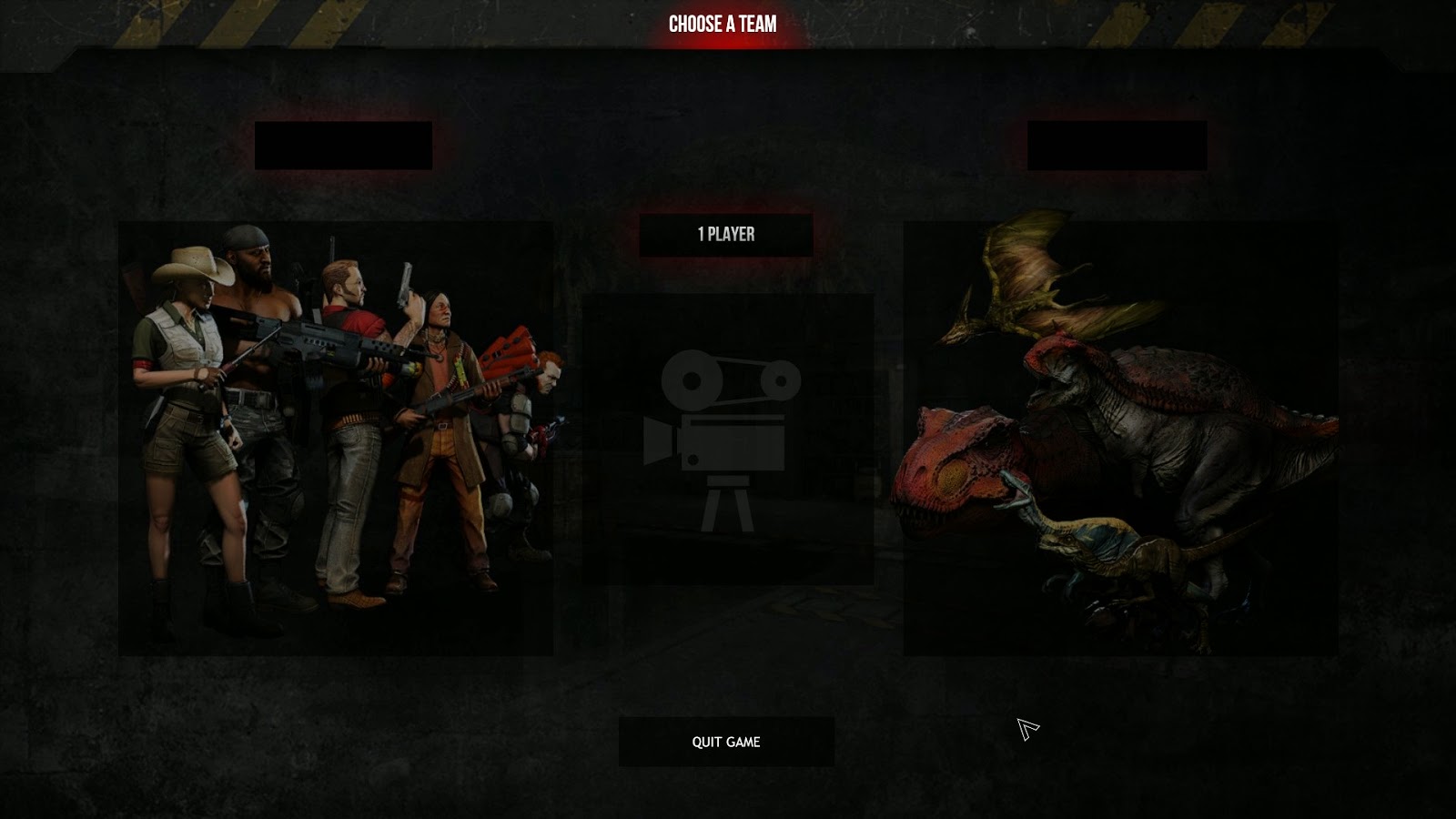 If my previous warnings haven't been enough and you are determined to give Primal Carnage: Extinction a shot you may as well know what your playable options are. Let's start with team dinosaur. Extinction let's you choose from nine different species, though really there are only five core choices, the rest being slight variations on the T-Rex, Raptor, Dilophosaurus, Pteranodon, and Carnotaurus. Remember how I hinted at poor balancing earlier? Nowhere is it more evident than in the dinosaur faction. The Raptors primary attack/skill is the ability to pounce and pin humans, ripping them apart. While the screenshots make it look good, in practice the excessive lag issues coupled with unresponsive, janky controls make this pounce attack stupidly difficult to use for pathetic amounts of damage compared to the attacks of some of the other dinos. On occasion I would "merge" with an enemy player instead of pinning them and nothing would happen. Dilophosaurus gets blinding spit,  which is nice but, again, anything with a skill shot is going to be virtually unplayable and half the time I would be furiously clicking and the animation would trigger, but no spit would actually emerge (and no damage would be dealt). Pteranodons were the most interesting to play as the only flying unit in the game, but were extremely difficult to control and maneuver due to unresponsive inputs which, again, leads to the issue of way too much effort and no reward. On the other hand the Carnotaur, for example, does damage by charging in straight line, trampling and biting all in it's path. Where one needs pinpoint accuracy to land a Raptor pounce or snag human to drop off a cliff as the Ptera, if the Carno slams into a wall or crate or gets stuck in the corner but is still "moving" and a human will still take damage from this clumsy onslaught. 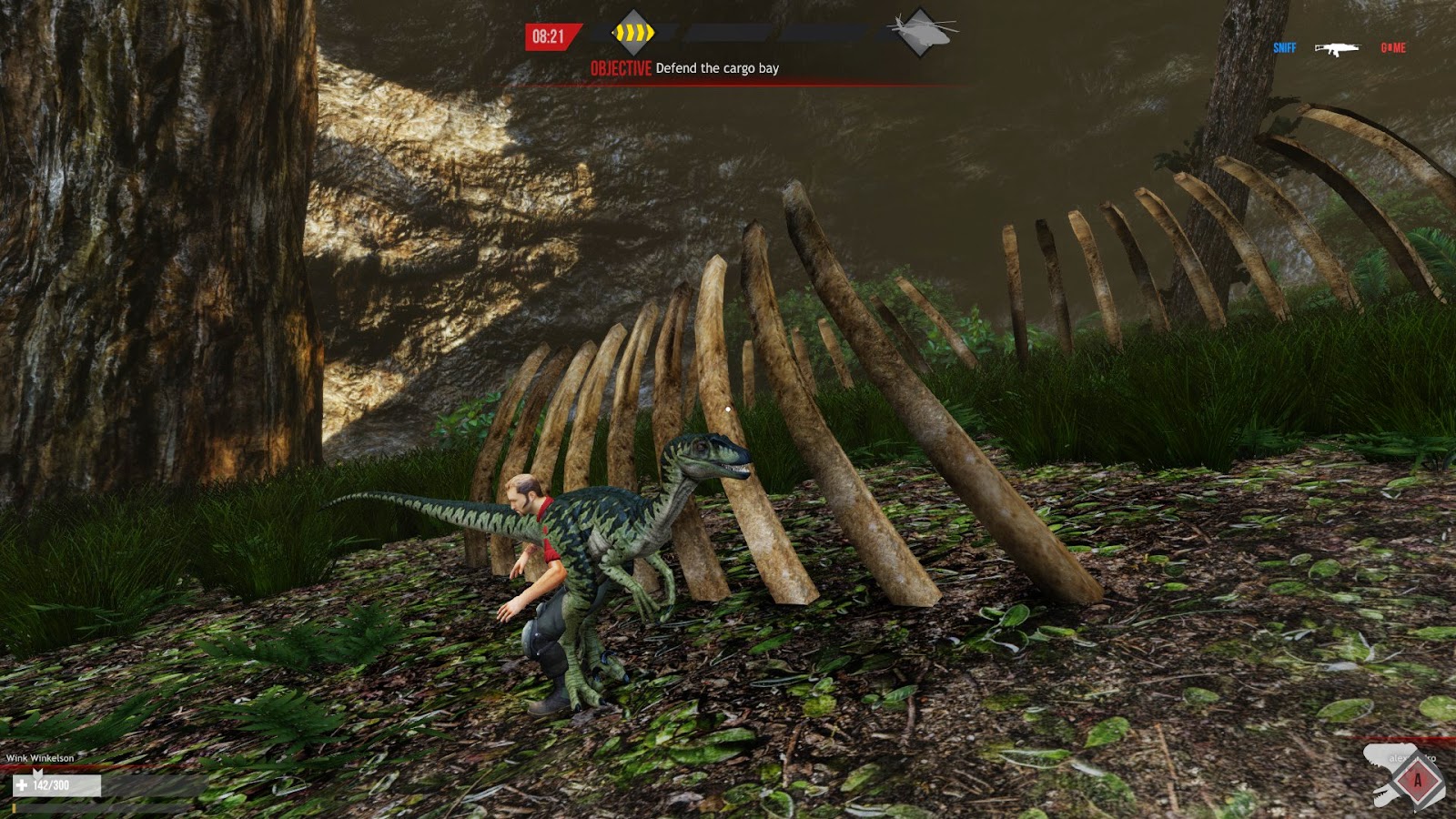 Team Human, which consists of five classes, wasn't really too much better. There's a Native American Tracker (perhaps a distant relative of Turok?) who uses a shotgun, a Commando with an assault rifle and under-slung grenade launcher (which does less damage than the shotgun), a Pyro with a flamethrower (which only led to this type of situation), a "Scientist" with a sniper rifle, and a Trapper with a net gun that disables dinosaurs with equal effectiveness regardless of the size or type of the target. This is a brand of logic consistent with the quality of product on offer here. There may not be friendly fire so there's no damage to allies, but there IS collision so those same allies will block your nets, bullets, and grenades like bomb shelter wall. For the record NONE of these classes have the ability to use iron sights though the Sniper *ahem*, excuse me, Scientist get's a Scope Zoom which seems unaffected by wobble, wind, or physics in general. Now I know L4D and CS don't have iron sighting either, but the controls and accuracy are responsive and smooth enough to at least compensate and the latter title allows for console commands to adjust the reticle size and color, etc. 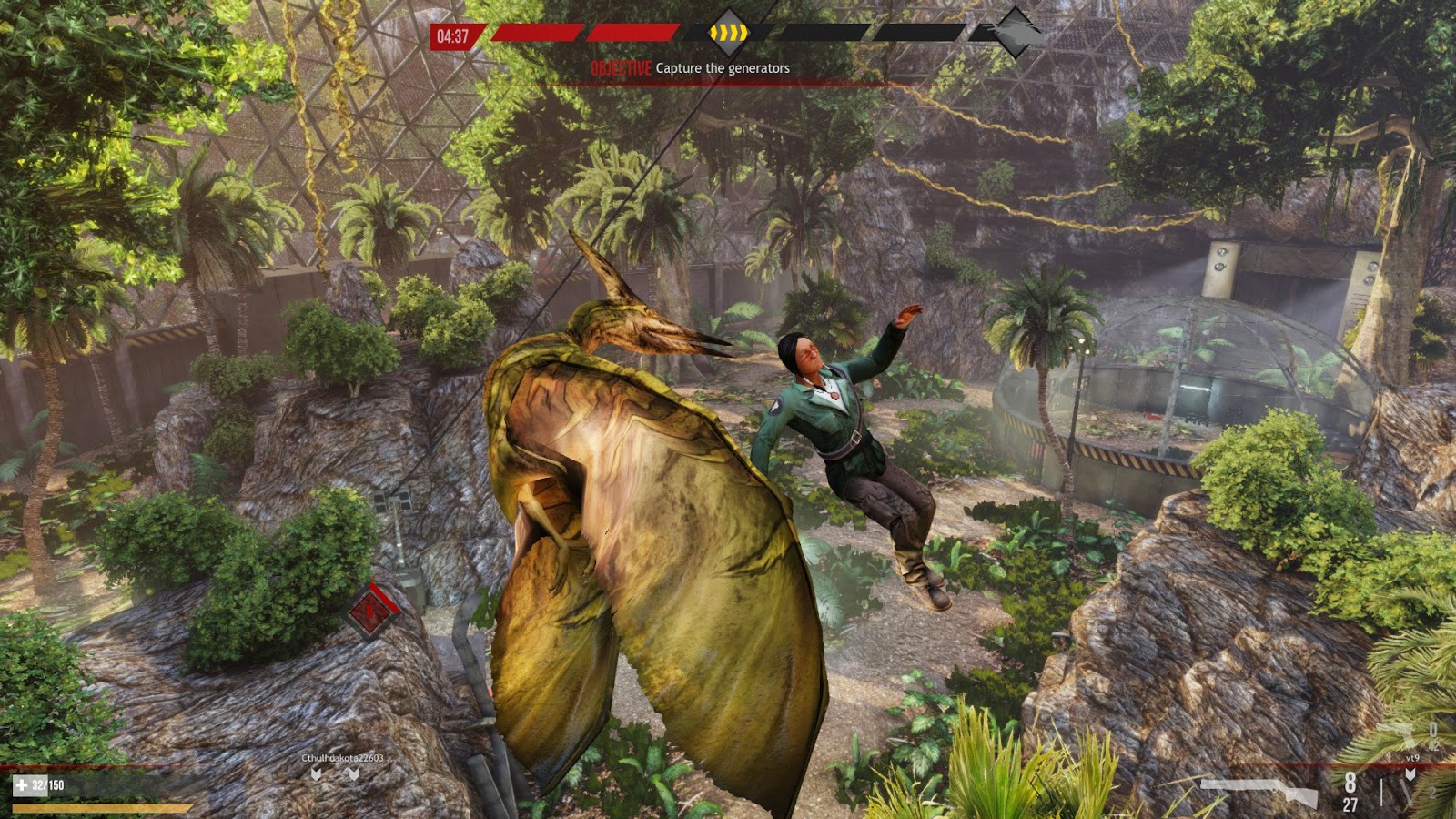 The last thing I feel I have to address is the loot/crate system in this game. As if it wasn't insulting enough to now charge players for what was supposed to be a free update to a well loved classic, they have implemented a loot crate system similar to Team Fortress 2 where crates containing things like custom skins or weapons will spawn randomly in the server. It would be one thing if this loot was just part of the in-game reward system and you could open the crate to receive your items, but players need to spend roughly $2 USD per key? Again this is roughly inline with TF2 pricing but, unlike TF2's endless bounty of awesome workshop creations and a game setting that invites the wacky and weird, Primal Carnage: Extinction's crates are filled with poorly made pallet swaps at best and just down right ugly or immersion breaking skins at worst. Now I admit visual aesthetics are highly subjective, but if I'm spending real world money on in-game vanity I expect a drastic visual upgrade, not just a blob of purple or green slapped over a stock version. Also, I feel the whole loot economy is hurting the game overall as, at any given moment while I was perusing available play options, "Loot Servers" where folks were idling for crates were as common as legitimate game mode servers. Add to this players frequently just AFKing even in non "Loot Servers".

Bottom line: I unfortunately cannot recommend Primal Carnage: Extinction in its current state and , frankly, I don't see it improving anytime soon. According to some forums, the original Primal Carnage is still being actively hosted and, while it may be slightly dated, you might be better served seeking it out as an alternative to Extinction. Or, like Mr. Hammond did Dr. Ian Malcolm, you can boldly ignore my warnings and try Primal Carnage: Extinction for yourself.  It's out of Early Access (or so it claims) and is available on Steam now for $20 USD (it is slated to also be available on PS4 later this year). It should be noted there are achievements and trading cards if that sort of thing matters to you.

Full Disclosure: This review was written based off a review copy of the game provided by @PrimalCarnage via Twitter.