Hi guys! Hope you all are having great weekends thus far and major props to everyone participating in the make-up gaming day to benefit Extra Life. Fingers crossed that we're able to push the total amount of funds raised over the $4 million USD mark today! The GIR and I are preparing for what always seems to end up being a frenzied cavalcade of events that sweep us up and into the new year. This time around, we  have to get a jump start on convention season right out of the new year gate, as 2014 will (hopefully) feature the single most aggressive costume lineup I've ever attempted. More on this in the near-ish future but, for now, on to the Week in Geekdom! 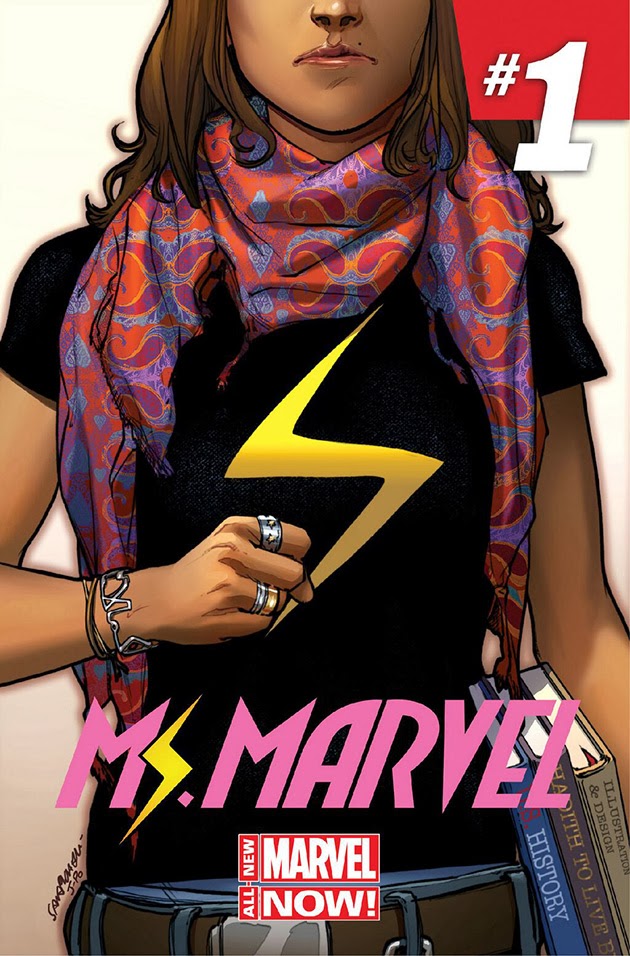 One of the biggest stories this week was Marvel's decision to have Muslim teenager Kamala Khan take up the mantle of Ms. Marvel. This Pakistani-by-way-of-New-Jersey girl assumes the role following transition of the former holder of the Ms. Marvel title, Carol Danvers, to Captain Marvel. It's a very interesting move by Marvel/Disney and a nice counterpoint to some of the themes and events we've seen from the comics industry. Here's hoping that the new Ms. Marvel run does well!

It was clear that Marvel wanted to capitalize on the release of Thor 2: The Dark World and the success of Agents of S.H.I.E.L.D.  by blitzing the public with a plethora of offerings across the media spectrum. In addition to their comics announcement above, Marvel released the details of the studio's freshly forged alliance with Netflix to produce not one, not two, but four new streaming superhero-based TV series. The forthcoming shows will allegedly focus on Iron Fist, Jessica Jones, Luke Cage, and Daredevil. These new shows are slated to start airing in 2015.

On Friday, following a 90 minute panel at Blizzcon, Blizzard Entertainment confirmed that Warlords of Draenor will be the next expansion for their MMO juggernaut/cash cow World of Warcraft.  The guys at Gamespot have this summary of both the panel and subsequent developments on this upcoming title.

Have you pre-ordered Sony's PlayStation 4? Did you have plans to play multiplayer games on said shiny new console? If yes to both of these, be prepared to pay for that 'privilege'. Sony announced on Tuesday that multiplayer gaming will command a monthly fee of $9.99 USD/€6.99/¥500. No such fee will be levered on PS3 owners and Microsoft has not disclosed any similar plans for its Xbox One, which will also be released later this month.

Monday marked the first time the Olympic flame has ever slipped the bounds of Earth and journeyed into space. Check out the video of the torch's visit to the International Space Station here.

Microsoft really would like you to reconsider your choice of web browser. So ardent is this need that, as part of the publicity build up leading to the debut of Windows Explorer 11, the software mega giant produced Inori, an otaku-inspired 'personification' of the browser. Inori not only has her own social media pages through which you can pretend to interact with her, but her own animated series. Note: animated series works better on Chrome.

Geneticists are hailing the so-called Crispr technique of gene modification as a potential revolution in how we, as a species, interact with our own genome. Click here for the complete details about this extraordinarily precise process that may allow researchers to 'edit' our nucleotides.

Harvesting energy from ambient sources has gotten an increasing amount of researchy attention in the past few years, largely because making a device that would succeed in doing so would be a potential solution to a whole host of dilemmas. The latest entry in this field is this metamaterial array developed by a team of engineers at Duke University. The latest edition of the journal Applied Physics Letters describes the array as it seeks to capture and store energy from basal electromagnetic radiation.


Earlier this week, physicists at the University of Vienna smashed the previously held record for wave-particle duality. Read here how a little heat and careful experiment design allowed for this momentous achievement.

We've talked quite a bit about the many wondrous applications of 3D printing. Add to this discussion the products offered by Reef Arabia. This group, working alongside Australia's Sustainable Oceans International, has produced some 3,000 'reef balls' with the help of 3D printers. If all goes according to plan, the balls will act as an artificial coral reef, lending critical support to natural reefs currently under threat of dying off.

Is it possible to be immune to cancer? Biomedical engineers at the University of California have research that indicates the answer to that question is yes.

The human body is so complex that even now, with a full arsenal of imaging technologies to assist in cataloging our gross anatomy, scientists are discovering new tidbits about our species. The newest issue of the Journal of Anatomy features the research of two Belgian orthopedists who have defined a previously unknown ligament in our knees.

Bringing you one step closer to super-villaindom are a cadre of undergraduates from the University of Pennsylvania who developed this prototype for a battery (and potentially brainwave) powered exoskeleton. The backpack-like suit allows the wearer to increase their total lifting capacity by up to 40 pounds (18.14kg) and will set you back $1,500 USD. The design also won this year's James Dyson Award.

Are you in the midst of writing your dissertation in the hopes of being awarded a Ph.D.? Are you weary of fielding the question 'So what's your research about?', then meeting with glazed-over eyes when you attempt to respond? A collective of fellow students sought to remedy this issue by entering in this contest and attempting to explain their academic labors through the time-honored tradition of interpretive dance. Click here to see the videos of the finalists and vote on who you think deserves to win!

See them before they disappear. That was the motivation behind photographer Jimmy Nelson's effort to capture some of Earth's most remote tribes on film. You can see snippets of his stunning work here.