Posted by Kel
Happy Easter to all those celebrating today! Even if this weekend did not include any holidays for you, there was still plenty of nerdy goings-on to get excited about (and/or ample excuses to nom on delicious seasonal candy). 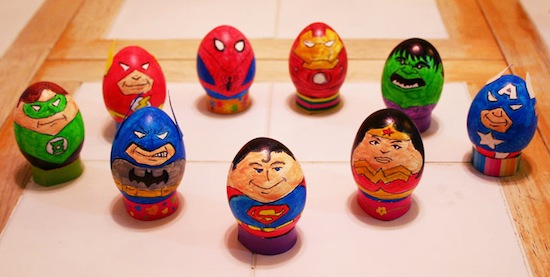 Yesterday saw the inaugural celebration of International Table Top Day. Introduced back in February by Geek and Sundry, the call went out to nerds and muggles alike to go forth, patronize their local game store, get together with family and friends, and partake in some non-digital revelry. That call was taken up by everyone from Steve Jackson Games to MTV, underscoring not only the burgeoning popularity of tabletop games, but the reach and degree of the Nerdaissance as a whole. Since this all went down just yesterday, it may be a little bit before we can get a grasp on how prevalent the celebrations where but I have a hunch that this won't be the last time March 30th will be commemorated with the rolling of dice.

In an effort of what may be extreme optimism about the prospects of International Table Top Day (or a gesture to ward off boredom for our progeny), game designer Jason Rohrer created A Game for Someone, which he then promptly buried beneath the Nevada Desert. While sporting game hunters or geocache afficionados are welcome to try and find the game, the intended "release date", according to Mr. Rohrer, is some 2000 years from now.

Dennaton Games announced that what had originally been slated to be DLC for their break-out hit Hotline Miami has officially morphed into a sequel. The as yet unnamed volume will be set in the 90s and aims to tie off a number of loose ends left by its predecessor.

Gamers are still raving about the latest chapter in the Bioshock franchise. If you're one of those who are still stymied by the game's intricate, physics-laden ending, the guys at Forbes have put together a handy breakdown of just what happened in Columbia.

Those of us attempting to stave off our craving for a new volume of the Song of Ice and Fire series can perhaps temper that need with a fresh season of its HBO incarnation, which debuts tonight.

The interwebs have been exploding with rumors concerning the upcoming 50th Anniversary Dr. Who special. While many of these have been discredited, fans thrilled at the official announcement that both David Tennant and Billie Piper would be active participants in the special.

Mr. Nathan Fillion celebrated his 42nd birthday on Thursday. If you'd like to offer belated birthday wishes to Captain Tightpants you can head on over to the homepage of his charity and make a donation in honor of one of the shiniest men to grace the 'verse.

The guys over at the Harvard-Smithsonian Center for Astrophysics (which has the power to enhance your mind just by reading the name) announced that what they initially believed to be a miniature stellar blast was actually a new kind of supernova.

In what may be either the most groundbreaking development in climate change ameliorative efforts or the beginnings of the destruction of humanity, scientists at the Universities of Georgia and North Carolina put forth their findings on a strain of bacteria that they genetically engineered to scrub carbon dioxide from the atmosphere. The bacteria transmutes the excess greenhouse gas into various potentially useful pseudo-plastics. No word on whether this project can be successfully brought to commercial scale or thwart the zombie apocalypse.

The man who defined the look of pretty much the entire roster of the DC universe in the 80s, Jose Luis Garcia-Lopez, turned 65 on Wednesday. DC announced that it will be releasing a collector's compendium of Garcia-Lopez' works next month to honor the latter's monumental contributions to comics.

Wishes for a happy con to all those attending Wonder Con this weekend. The past 2-3 years have seen the convention blossom from the red-headed stepsibling of San Diego Comic Con to a major event in its own right. This isn't exactly surprising, given the fundamental issues that have cropped up with SDCC. As we discussed last year, we're probably going to see a lot more of this phenomenon.