Posted by Kel
Hey there readers. With the approach of the holiday season (though some retailers would have us believe it actually arrived months ago), we may find ourselves starting to gear up for long hours spent either waiting for or being in transit. This, coupled with the modicum of newfound freedom I have whilst waiting for my advisor to complete another round of thesis edits, was the fodder for this week's post. Oh reading for pleasure, how I've missed you.

This limited window in which non-assigned reading can be consumed was almost immediately filled with a book that I'd been eagerly anticipating for more than 2 years (which, of course, is a drop in the bucket of waiting for the next book in the a Song of Ice and Fire series). I say 'almost' because the very first thing to grace my free hours was The Hobbit, which was due for a re-read before its upcoming cinematic debut. It just so happens that said text is also a great post-apocalyptic tale for those of you out there like Australian Prime Minister Julia Gillard, "anticipating" that whole doom of humanity thing that's supposed to go down in about a week.

The focal book is The Twelve by Justin Cronin, the second volume in his epic trilogy, The Passage. 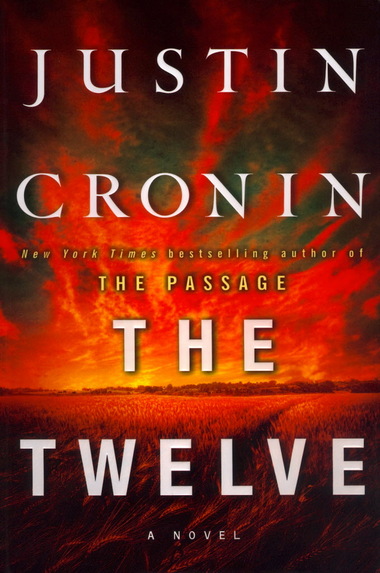 Wait, the middle book of a trilogy? Can I feasibly tackle The Twelve without reading its predecessor first?

Could you? Yes, definitely. Do I recommend it? Eh, not so much. With a gulf of years between installments, Cronin takes pains to recap the events that took place in the first book (which shares a title with the trilogy itself) in order to get both previous readers and newcomers to the series up to speed. While you can mentally back your way into the various characters and occurrences that took place in The Passage, doing so will involve some careful reading that may detract from your overall experience with The Twelve. Also, partaking in the first book will prepare you for the unorthodox devices that Cronin continues to use in the second (more on this in a minute though).

**The following review assumes that you have read The Passage. While there are no explicit spoilers, some tidbits may give away certain things if you have not read the first installment of the trilogy.**

Akin to The Passage, a very large portion of The Twelve is spent building background knowledge, the narrative of which is then punctuated by massive, non-sequential leaps in time. Despite this flux, readers will be instantly reminded of the periods which are critical to the story itself. A sizable percentage of the first half is spent in and around year zero (2014), the year in which a secret US military agency accidentally unleashed their manufactured, bat-derived virus onto an unwitting populace. Meant to create a race of super-soldiers, the virus instead creates vampires (not sparkly BS vampires, but creatures that would be more at home in 28 Days Later) and these critters then lay waste to nearly all civilization in North America. This time, we get to see year zero at ground zero, literally the fates of those unfortunate enough to be denizens of the metro-Denver area and, later on, all those who lived west of the Mississippi River.

This, plus some interludes about eighty years AV (After Virus) and a couple snippets of text from an academic conference a millennia later, is all essentially a lengthy introduction for the second half of the book. We get several pieces of the puzzle we were abruptly left with at the end of The Passage, though some are markedly more useful than others. Despite Cronin's attempts to leave a trail of proverbial bread crumbs for readers who may not remember each individual from the preceding volume, it's often difficult to recall just why a particular exchange or series of events is important without first conducting a series of Google searches. A brief, annotated list of pertinent characters would have done wonders to facilitate the transition from book one to book two. Additionally, though the annihilation of a continent is, in itself, exciting, Cronin deliberately tamps down any tension around the initial outbreak and resulting events so he can instead pen a character-centric crescendo. The result is extremely uneven pacing, even when the narrative is not skipping centuries, with an enormous amount of ink being spilt on relatively trivial matters while legitimately important occurrences merit nary a sentence.

It's something of a grind getting through that first half, not going to lie to you guys. Is it worthwhile? Potentially, but if, and only if, you keep in mind that this is the second novel in a trilogy. Intrigue abounds and there's action aplenty, but, as mentioned, few satisfying answers or conclusions. This is to be expected of the bridge volume in a series of three, but something that definitely needs to be taken into account if you decide to tackle The Twelve.

Once we get past the lengthy world building, we're incrementally reunited with the protagonists of The Passage. Five years have passed since the rather sudden ending of the first book and the former Colony members are nigh-unrecognizable. Mashed under the weight their precarious, fragile existence in a world where humans no longer occupy the top tier of the food chain, the intrepid band of ex-Californians has been rent asunder and scattered to the winds. We encounter each character in turn as we learn more about the nature of the vampires (called "virals" and a host of other names in the text) and just how close humanity lies to the edge of oblivion.

The force shunting the human race towards said fate are the vampires that owe their altered physicality directly to the Twelve, the eleven test subjects originally dosed with the manufactured virus and Zero, the sole survivor of the event that allowed the virus to cross over from bats to humans. These 'familiars' tend to lack the mindless rage and hunger that characterize the majority of their hemophilic brethren and, in at least one case, can attract a following of their own. These second-generation vampires fancy themselves the next step in evolution and the book's second act is a thorough layout of the designs they, and their creators, have in mind regarding the domestication of what few humans remain alive.

The book suffers from many of the same shortcomings as its predecessor: the uneven pacing, the frequent overwriting, the deep-seating sense of self-importance, and the use of tired tropes long since rendered inherent to the genre. At times Cronin's use of that last entry border on unintentional comedy, Oh an ideal summer's day spent picnicking with innocent children just outside the walls that guarantee our safety from bloodsucking rage monsters. What could possibly go wrong?
Cronin makes a clear effort to tighten up his writing in The Twelve. Gone are the pages-long meanderings of internal monologues and, once the action gets going, there is a genuine build to the drama and excitement. All this, unfortunately, tends to be overshadowed by everything in the above paragraph. The characters ring hollow and approach caricature in some instances. Still, the questions that naturally come to mind as one attempts to imagine Cronin's painstakingly crafted universe are strikingly interesting, even when the story itself is not.


Bottom Line: If you liked the The Passage and could put aside Cronin's authorial flaws then you may enjoy The Twelve. If you're a fan of post-apocalyptic tales, then you may also enjoy this book. If you're neither of those two things then this probably isn't the book for you. Hell, even if you are both those things the book may still come as a disappointment. Ultimately, it's a question of your willingness to go along with Cronin's style or, if you are willing, if actually tackling the nearly 600 pages is at all a worthwhile venture.