Nerd Life: What Makes a Nerd/Geek?


Ok, so it may seem strange to run this post now, after 11 other posts have already been featured, but this is a subject that deserves extra care and the additional time that such an undertaking typically requires. The previous posts have touched on a number of assumptions and made reference to certain characteristics that are considered commonplace amongst those of the nerdy/geeky persuasion, but we've never actually delved into the latter and attempted to parse out what it means. It's generally assumed that the terms nerd/geek are fairly specific terms but, like many labels that seek to define social characteristics, a moment's thought will bring forth a myriad of potential definitions. So, ideally, this post will serve as the first in a series of entries that will dissect these labels and, in turn, how we identify ourselves.

Like many other terms that attempt to encompass a diverse, often abstract set of subject matter, there is considerable debate concerning the very words 'nerd' and 'geek'. Concordantly, there have been countless endeavors to compose concrete definitions, often by delineating the alleged differences between the two by transmuting them into a classification system of sorts. Unsurprisingly, these efforts have not resulted in any sort of consensus and the community remains starkly divided between those individuals who cleave to the notion of separate definitions and those who use the terms interchangeably. The majority of English language reference materials lend their support to the cause of the latter group and describe the words 'nerd' and 'geek' as synonyms. Perhaps it's an appropriate illustration of our characteristic tendencies that some of our brethren require additional precision beyond that provided by the Oxford Unabridged. 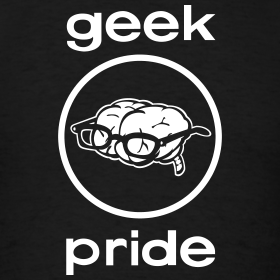 Ongoing debate or no, there are a handful of associated descriptors that are nearly ubiquitous when either definition for 'nerd' or 'geek' comes up for discussion. References to intelligence, social facility, obsessive tendencies, and existing apart from what is considered 'normal' are most common and are often applied to both words. It is the degree to which these descriptors apply that Separatists claim makes 'nerd' distinct from 'geek'. Specifically, it is the level of social awkwardness inherent to a given individual and the degree of obsessive adoration for a subject that causes the former to diverge from the latter, with a nerd possessing a higher quantity of both.

Your affiliation as a Separatist or a Mutualist is probably derived from a proprietary set of definitions or an inherent, self-wrought belief that the terms are, in fact, one and the same. This fact is what renders the above debate at least somewhat moot. Regardless, you probably find yourself agreeing that much, if not all, of the following is an accurate depiction of yourself:

-   There are given subjects (or subsets within a subject) that you LOVE. These subjects may be considered 'normal' by an outside observer but, more likely, they are obscure, complex, or not-deemed-age-appropriate by the general populace.

- You probably know more about the subject discussed above than the average person and you may relish in the notion that engaging with the subject of your adoration lies outside of what mainstream society would consider a fun or worthwhile hobby.

- You possess a certain curiosity or imaginative capability and these drive your desire to venture beyond more conventional avocations and entertainment.

This last point is, I feel, the crux of our communal identity as nerds/geeks. This drive is often accredited to the expression of inherent intelligence, but this is not entirely accurate when we seek to describe ourselves. All our commonalities can ultimately be attributed to our vast and insatiable curiosity/imagination. It was probably obvious to you even as a child. You perceived things differently than your peers. You may have expressed that perception in paintings, in a collection of characters from various tabletop gaming sessions, in a novel, or via the cataloging of every butterfly that ever fluttered through your yard. These weren't just hobbies; these were expressions of your truest self. You felt alive.  Your voracious consumption of literature concerning Norse mythology or World War II era firearms weren't an attempt to become an authority on the matter, but rather to expand the breadth of your creative horizons. To build a convincing campaign that featured Vikings, you needed to be well-versed in Nordic culture. Your appreciation of Call of Duty was heightened by your knowledge of contemporary ordnance. It is this curiosity, this power of the imagination, that separates us from someone with an encyclopedic knowledge of baseball statistics. It is the difference between fact collection/obsession and actual nerdery/geekery.

This is why we're often told that it seems like we "never want to grow up". It's a part of ourselves that we should, and do, guard zealously (more on this in a future post!) though this may seem curious to those bearing witness to our lab experiments or gaming sessions or debates concerning the virtues and vices of certain captains of the U.S.S. Enterprise. This is fundamentally who we are and, despite our differences, something we just might be able to agree on.