Like many, arguably most, nerds, I'm a voracious reader. Serendipitously, my present daily commute allows for at least 40-60 uninterrupted minutes of potential reading time five days a week. The reason why being packed into the subway sardine-style doesn't faze me? My imagination is usually running on all cylinders before the automatic doors ease shut (when I'm not buried under assignments for school that is). As such, my hope is that this will be the first of many book reviews, since most of us are continually on the lookout for a solid read. 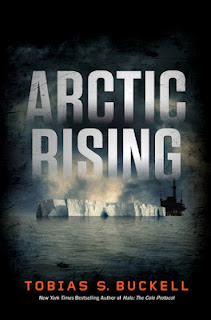 This year boasts a particularly dense and diverse roster of new titles that would appeal to those of the geeky persuasion. My most recent encounter with one of these came in the form of Arctic Rising by Tobias Buckell. Released back in February, this tight-knit thriller has been making waves amongst fans of several genres and the title appeared has on several 'must read' lists. The book claimed to combine my love of spy-action, political intrigue, near-future hypothesizing, and science. A quick perusal of the plot synopsis was enough to convince me to give it a go.

Set approximately 60-75 years beyond present day, Arctic Rising presents a rendition of planet Earth that scientists have been warning us about for over 30 years now. The atmosphere, rife with anthropomorphic carbon, has retained more than enough heat in the biosphere to eliminate the Arctic icecaps and open the entirety of the Northwest Passage (somewhere in Samsara, the spirit of Sir John Franklin faints). The climatic shifts associated with global warming have resulted in corresponding shifts in sovereign wealth and, concordantly, in geopolitical power.  State, corporate, and supranational actors alike are jostling for control in this still-changing environment while simultaneously dealing with an volatile post-Peak Oil economy.

Amidst this stifled furor, we meet our protagonist: Nigerian airship pilot Anika Duncan. Having forsworn her days as a mercenary, Anika enjoys the comparative quiet and routine of flying reconnaissance missions for the United Nations Polar Guard (the UN having climbed to increased prominence as many territories exposed by the receding Arctic ice are either hotly contested or stated to be autonomous and separate from any given country). After her airship is shot down by what appeared to be the RPG of a smuggler trafficking in nuclear arms, Anika finds herself to be the unanticipated wrinkle amidst reams of seamless political scheming.  The book focuses primarily on Anika's attempts to discern the identity and motive of the parties who blew her out of the sky and, as the facets and scope of what turns out to be a conspiracy of a titanic scale, her efforts to simply keep breathing.

It's a taut, quick read set at a pace that you'd expect of a thriller. The quality of the writing starts out somewhat weak, and there are points where you question the judgment of certain characters, but it strengthens markedly by the time you're about a third of the way into the story. Buckell earns points for creating a strong, intelligent heroine, but the majority of the cast of secondary characters fall into the realm of one dimensional. The author takes care to create an extremely realistic setting for his tale, but the twists and turns he subjects his readers to are well-worn and the climax of the action feels so cliché that you may wonder if he'd originally envisioned the text as a comic book.

Mercifully, the science was clearly a priority to Buckell and his presentation of the environmental factors at work and the consequences they wreak is arguably the strongest facet of the narrative. As someone who studies sustainability and environmental management, I was especially discriminating of Buckell's depiction and was pleasantly surprised by the end product. His characterization of the 'Arctic Tiger' nations (the countries that would experience a substantial inflow of wealth as climate patterns shift and fossil fuels are displaced out of necessity) is highly feasible and the conflicts that arise amongst claimants of newly freed Arctic territories seems probable. You find yourself agreeing with Buckell's description of human reactions to the altered Earth simply because they feel legitimate. This stuff seems like it could happen tomorrow. Furthermore, the author doesn't shy away from thorny social, political, and scientific issues during the course of the novel. He makes a point to touch on race, gender roles, sexuality (Anika's lesbianism factors heavily into the tale), and the quest for personal happiness as well as macro quandaries like how denizens of low-lying island nations must be properly compensated after their homes are swallowed up by the melted remnants of the Arctic icecaps (something that Grenedan-born Buckell plays close to the chest). There are several occasions where Buckell takes his eco-enthusiasm to a near-bombastic level of sermonizing which do actively detract from the rest of his narrative, but this is typical of the vast majority of literature concerning global warming (this will be the subject of a future post). Additionally, there are a handful of scenes that ostensibly seek to dissect a larger social matter, but end up contributing to the issue on the very side that Buckell sets out to turn on its proverbial head (oh yeah, we get 'empowered' hookers with hearts of gold).


Bottom line: it's a fun read so long as you don't try to take it too seriously. If anything, you can easily atone for the book's weaknesses with your own conversational deconstruction. It's brain candy, particularly if you're a fan of the genre or ecological sciences. A good nerdy beach read best enjoyed with a margarita and a pinch of salt.