Posted by Kel
Happy weekend guys. Hope you've all had a great week and a suitably excellent weekend (and that you're not broke as a result of the Steam Summer Sale). There are a few hours left to get in on our Street Fighter IV giveaway too! Ok, you got your entry in? Let's get down to the week in geekdom!

The onslaught of all things Star Wars ahead of the release of Episode VII is building to a crescendo. Disney and Lucasfilm will be adding to this on September 22nd, at which time they will release three new novels retelling the original trilogy from new viewpoints. You can get a sneak peek of this forthcoming goodness by reading this excerpt.
The daughter of the late, great Sir Terry Pratchett has confirmed that Shepherd's Crown will be the last novel in the Discworld series.

If you're a Star Wars fan you will almost assuredly enjoy this web comic depicting the backstory of Green Leader.

Are your dice balanced? The following video will show you how to determine if you've got a fair die or if your complaints that said die was cursed and plotting against you were true all along.

Have a tissue or three ready for Peter Jackson's tribute to Sir Christopher Lee.

On Monday we got the first episode of Bruce Timm's new animated series: Justice League: Gods and Monsters Chronicles on Machinima. If you haven't seen it already, here's a sample of what the series is offering. Also, here is Mr. Timm's take on making the series and taking some of the most classic DC heroes into brand new territory.

We've known it all along, but now we have definitive, written proof that Han shot first.

This was a week of awesome new movie trailers. We now have a look at Hunger Games: Catching Fire Part 2 and the Martian.

The Large Hadron Collider has been successfully running at full capacity for a bit now (and already giving us astounding data). Given that we haven't been plunged into the depths of a black hole as a direct result, maybe we can take some time to discuss the philosophy underpinning this lancet into scientific discovery.

Or, if philosophy isn't your thing, there's these findings in the latest edition of Nature that detail the discovery of the Bs0 meson. 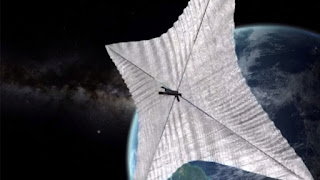 It's been 39 years since Carl Sagan proposed the concept of a solar sail, but this week that musing became a reality (and Bill Nye is psyched about it).

Think you've exhausted all that Google Maps has to offer (and mastered Geoguessr as a result)? Google is upping their live mapping game by expanding into the sea.

Speaking of new visual frontiers, NASA will be bringing us video feed to YouTube in 4K resolution.

Thanks to SpaceX's Falcon 9 rocket the DSCOVR module has gone from very expensive space junk to fully functional monitor of solar storms.

Until that channel is launched, however, we can content ourselves with this set of images from Ceres.

The new Nature Scientific Reports details the work of Chinese and Singaporean physicists who appear to have demonstrated violations of local realism.

The latest edition of Nature Nanotechnology includes this research out of Harvard that allows for scientists to 'spy' on the functionality of individual neurons.

We're inching closer to the release of Oculus Rift, but we're getting more virtual reality goodness in the interim. Introducing the Oculus Touch controllers.

Ever wonder why the trip home usually feels shorter than the journey to get to your destination? Here comes the science.

We've talked at length about Elon Musk's proposed Hyperloop, but now we're getting sneak peeks of what it might look like.

We have our first official glimpse of the toys associated with The Force Awakens.


There's being a fan of Elder Scrolls and then there's investing $50,000 USD into a remodel that transforms your basement into Tamriel.

I'll leave you guys with this footage from YouTuber styropyro and his latest creation: a functional 40W laser shotgun. As always, best wishes for an excellent week ahead.