Posted by Kel
Hi guys. Hope you're all having a great weekend thus far. The past few days have been a nice respite from the hustle and bustle of the past few weeks (and the torrent of amazing gaming news coming out ahead of E3). It's giving me a chance to push ahead with Steampunk Hawkgirl and for all of us to tackle the last few entrants to the Playtesting Lab before we put the latter into Gen Con hiatus (the Lab will open again on August 11th). Gah, Gen Con is so soon! But ok, let's get back to the Week in Geekdom.

This week Marvel undid one of its most controversial decisions and Spider-Man may never be the same. 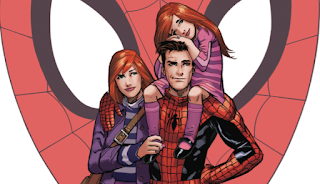 Not content with just that change, Marvel is on the cusp of launching the reboot of its entire roster. We got a glimpse of what the new incarnations of our favorite characters will look like earlier this week.

The horrified gasps you may have heard (or uttered yourself) earlier this week were doubtless from readers of the new Marvel Star Wars comic line. Star Wars #6 gave us the first real taste of what life will be like in the new Expanded Universe (warning: link contains spoilers).

Action Comics #41 gives us this look at the newest incarnation of Superman.

The past week has been chock-full of gaming news, not least of which was 2K's enormous announcement that XCOM 2 is not only very real, but will be coming our way later this year. We got a few more details about humanity's struggle with the alien invaders. And, if you missed it, take a gander at the announcement trailer.


We also got our first look at Fallout 4. As the Care and Feeding of Nerds is based in Boston, we were particularly fascinated by how Bethesda depicts our fair city post nuclear apocalypse.

Just in time for the forthcoming Summer Sale, Steam put forth a new refund policy that's sure to make our wallets weep just a bit less.

The policy was only one bit of big Steam news this week. Valve also released long-awaited details concerning its controller and Link system. Both items are now available for pre-order and will allegedly ship in October.

Turbine confirmed on Tuesday that it will be shutting down the free DC-centered MOBA Infinite Crisis. The game will go dark on August 14th.

The first peek we'll get of the Episode VII universe will come from Star Wars: Uprising, a mobile game.

Big Trouble in Little China will be the subject of a remake and the Rock will be in the starring role.

Mega Man is already prepping for his 30th birthday celebrations. The diminutive Capcom icon will be getting a 26-episode animated series airing in 2017.

George R.R. Martin gives us 5 characters from a Song of Ice and Fire that he wishes weren't missing from Game of Thrones.

We've been following the upcoming release of Windows 10 for a bit now, but this week we got an official release date. You'll be able to upgrade beginning on July 29th (and can put in your 'order' for the free upgrade right now if you're running a Windows OS by clicking on the little icon in the lower right-hand corner of your UI).

Physicians in Brazil have pushed the boundaries of what's possible with 3D printers after implanting a portion of a human skull printed in pure titanium.

What would you see if you were to fall into a black hole?

At first glance, it may seem like ordinary black paint but this substance may be the key to harnessing solar energy like never before.

The latest edition of Science includes details concerning this test that can reveal every virus you've ever contracted.

We may have already developed pharmacological weapons against the Ebola virus and just didn't know it.

If you're one of the millions of people for whom sleep doesn't come easy, MIT would like you to try on this hat.

Beginning this past Wednesday, the Large Hadron Collider ran (and will continue to run) at full power.

A group of British doctors have released data indicating that dual-faceted treatment with a pair of drugs is immensely effective against melanoma.

Meet Boyan Slat, the Dutch 20-year-old whose ambitious plan may be humanity's best hope to rid our oceans of man made debris.

ASUS, Republic of Gamers, and In Win have combined their powers to create this gobsmacking 'transforming' PC tower.

After years of a decidedly antagonistic relationship, Godzilla and Tokyo have officially buried the hatchet as the former was made a citizen and ambassador of the latter.

I'll leave you guys with this video footage of a remote-controlled R2-D2 fridge! As always,  best wishes for an excellent week ahead.