Happy weekend guys. We're only two-ish days into the Sochi Olympics, but it's already been chock-full of excitement. It's been especially nice to bucker down and enjoy the Games, as the GIR and I have been battling...well several aspects of the winter season for much of the past week. We've each teetered on the cusp of having our sniffles blossom into full-blown illness and alternated on snow removal duties, as our area received another 15 inches (38.1 cm) of snow! Fortunately, everyone is now healthy and we're supposed to have at least three or four consecutive days without a fresh coating of the white stuff. But enough of that. Less winter, more This Week in Geekdom!

Readers of the Superman portion of DC's new 52 have been skeptically pondering the extremely-unlikely-but-must-be-asked question: Did Superman actually die?

The series Gotham just got <that> much closer to reality this week with the casting of Commissioner Gordon.

Ever wanted to get into cosplay, but are a little stymied with the costume-making process? Patrick Dean can help you out with his humbly named tumblr page.
Games

The greatest "oral"history of Street Fighter II ever. That is all.

Coffee Stain Studios, the team behind the Sanctum games threw this together at a recent programming jam. Yes, you are reading that correctly. It is Goat Simulator and it's generating a surprising amount of buzz for what's essentially a playable alpha.

Activision Blizzard spent much of this week talking up the blockbuster potential of Destiny, the forthcoming title from the creative team behind Halo. Will the game live up to the hype? We'll have to wait and see.

Oh EA. One of these days I may be able to write about how well you handled the launch of one of your games. Today is not that day.

Guardians of the Galaxy won't hit theatres for a few months yet, but rumors abound that a sequel is not only guaranteed, but may be rolled off the production lot even sooner than initially thought.

The latest edition of Science Translational Medicine features the work of a joint team of Swiss and Italian researchers who were able to restore the sense of touch to an amputee with their bionic limb.

In what sounds like a feature pulled straight from a summer popcorn flick, Japanese mechanical engineers have developed these fuel cells which essentially make cyborgs of the giant cockroaches that bear them. Cyborg cockroaches: not just for super villains anymore.

Would you obey the commands of a traffic-controlling robot? This is the state of automotive affairs in the Democratic Republic of the Congo and, given the success of the program, potentially a future feature on a road near you.

Ok, so employing robots may be one way to make order of frustrating traffic congestion. Renault has a very different possible solution to the same problem: this drone-launching, traffic detecting concept car.

The North Star has been a major navigational focal point for centuries, but this celestial feature appears to be less constant than astronomers believed it to be. A team of researchers from Villanova University has been documenting the not-so-gradual brightening of our best-known cepheid neighbor.

The fact that Bill Nye effectively thrashed young-Earth creationist Ken Ham in a formal debate concerning the validity of evolution earlier this week didn't surprise many but, if you missed the oral duel, here's a solid breakdown of just why Nye won.

On Friday, archeologists announced in the text of PLOS ONE that they had unearthed the oldest evidence of human activity outside of Africa.

Ice-T reads a Dungeon's & Dragons manual for Audible and the results are just as hilarious as you'd imagine they'd be.

Artist Adam Burn calls himself 'the renowned planet killer' but you'll likely agree that few people could bring about such imagined destruction in such breathtakingly beautiful fashion. 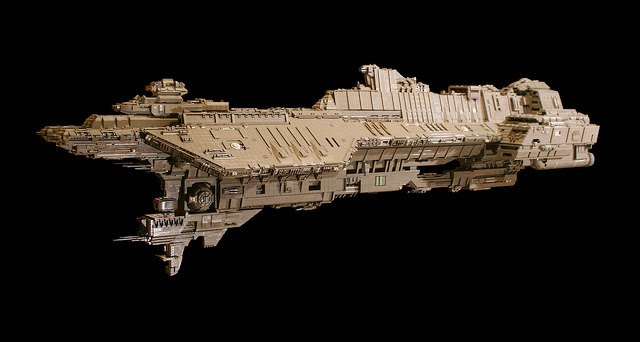 It was a feat of Lego engineering four years in the making, but Halo aficionado Mark Kelso successfully crafting this gargantuan model of the Spirit of Fire. Read here for his chronicle of the construction process and plenty of process pictures.

Speaking of Legos, would-be Lego engineer Flailx is vying to have this Sherlock-themed play set enter the pantheon of officially sanctioned Lego designs.

Last weekend may have been the big football weekend here in the US, but the current lack of tackling hasn't dampened the creativity of graphic artist John Raya. Raya drafted these reimaginings of the logos of NFC teams with elements of the Star Wars universe.

What would you think of an orange that couldn't roll away? Well, these Japanese horticulturists have cultivated just such a thing. Check out the literal fruits of their labor: these pentagonal oranges.

The Voynich Manuscript has befuddled researchers since its discovery in 1912, but botanist Arthur Tucker believes he may have the key to decrypting the as-yet-undecipherable text used throughout the tome. Does the cipher lie in these Mexican plants? We may soon find out.