Sweet mother of Thor, it finally stopped snowing! Granted, there have certainly been more than a few winters in recent memory that featured prodigious amounts of snow here in New England, but the relentless pacing of this year's storms makes these quiet periods seem incredibly welcome.  Meanwhile, I will continue to shamelessly count shoveling as a trip to the gym. But enough of the snowbound updates and on to the Week in Geekdom!

It may not be a hoverboard, but we may get a bit of Back to the Future in real life beginning next year. Nike designer Tinker Hatfield confirmed that we will see power laces featured on sneakers in 2015.

Tomorrow, February 17th, asteroid 2000 EM26 will make a pass by Earth. You can watch this interstellar flyby live as it happens here.

The most recent issue of the journal Nature Communications detailed the development of this, an inexpensive polymer with the ability to 'heal' itself.

Rumors of the death of lunar rover Jade Rabbit may have been a bit premature. On Thursday, Yutu was confirmed to be able to receive terrestrial signals.

The upcoming edition of Physical Review Letters contains research that may appeal to those of us with non-linear locks. A joint effort by engineers from MIT and the Université Pierre et Marie Curie have created this 3Dmodel of curly hair.

The use of fusion as a viable energy source got a little bit closer to reality as researchers were able to confirm that they could produce more energy with such a reaction than was utilized to ignite the fuel. Bonus: the lead researcher has a name befitting of scientific badassery/burgeoning supervillainy.

File this under Taking Science Fair Projects to a New Level. Using Legos and a few bits of miscellaneous hardware, Seventh grader Shubham Banerjee was able to create this novel Braille typewriter.

There's cross stitching, and then there's this opus from artist Aled Lewis. At 30 feet in length, the Coruscant Tapestry captures the events of all six Star Wars films in carefully placed embroidery thread. 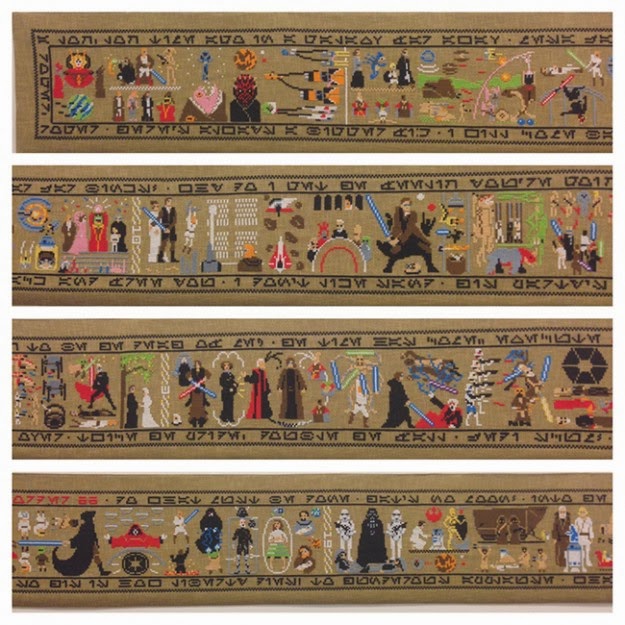 In a belated nod to Valentine's Day, here is an explanation of love from some of your favorite Star Trek characters.

Speaking of Valentine's, researchers at the University of Oslo were able to crack the runic code utilized by Vikings. The results were coincidentally appropriate.


As always, best wishes for an awesome week ahead!