Hi guys. I'm so sorry the blog has seen only This Week in Geekdom posts for the past few weeks. The combination of holiday frenzy and a rash of administrative edits on my graduate thesis before the latter gets sent off to the bindery has effectively sucked away any and all free time. Honestly, sometimes it seems like the thesis has more regenerative powers than the quarterly Workish Elder Hydra, but soon that nigh-unending tome will be out of my hair for good and we can return to a regular posting schedule. In the meantime, let's get down to This Week in Geekdom! 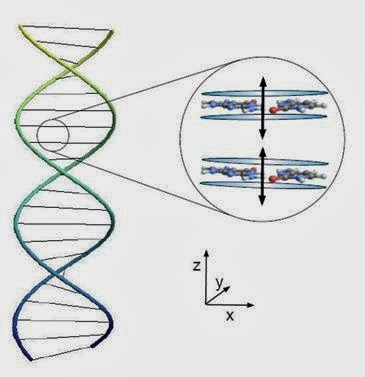 Though the helical shape of DNA has been an integral part of biology for decades now, the cause behind that unique formation has been a source of debate for just as long. This week, physicists at the University of Singapore released their findings that quantum entanglement may be a significant factor.

It was not a good week for the International Space Station (ISS). On Wednesday, NASA was forced to reroute some of the Station's coolant systems in order to prevent overheating.

Fortunately, this week wasn't all crisis-management for NASA. Tuesday gave us our first glimpse of the Valkyrie, their humanoid robot and entry to this year's DARPA Robotics Challenge. Click here for more pictures and check out the video below that will make you glad we're living in the future.


Speaking of robots, Google got in on the mecha-party this week with their purchase of Boston Dynamics. This was the eighth robotics company that Google's bought in the past six months. Can we officially start calling them the makers of Dkynet?

It's easy to take the moon for granted, so regular in its orbit and rotations. However, the origins of our lunar satellite remain a point of contention for many researchers. The latest issue of Nature seeks to pry apart conventional impact theories and pinpoint how the Moon came to exist.

The European Space Agency has its sights set on a harrowing, impressive feat of extra-atmospheric dexterity: landing a probe on a moving comet.

An invisibility flashlight. Science fiction? Yes, but perhaps not for long...

Xbox One and PS4 have each only spent a few weeks in the public domain, but already programmers are working to build emulators for these new-generation machines. Read here for details on this quest to bring the console experience to your desktop.

While Microsoft and Sony vie for market share, Nintendo struggles to maintain relevancy. The Wii U has its work cut out for it if the console is to survive.

YouTube has not elicited too many smiles from its users in the past few weeks. The ruling by parent/overlord company Google mandating the use of a G+ account in order to comment on videos was not too popular to say the least,  and said edicts only appear to continue. Earlier this week YouTube sent thousands of notices to users who had posted clips containing video game footage claiming copyright infringement and demanding that these posts be removed.

There's video gaming and then there's video gaming as practiced in South Korea. The East Asian nation is famous for its voracious appetite and national esteem for video games, so it is not entirely surprising that a proposed new anti-gaming statute is starkly dividing the country. Read here for details on how video games may be classified as an addictive substance.

Tuesday was the 20th birthday of Doom. Two decades later, the game's creator reminisces about the title and its impact on video games as a whole.

Watch the new, longer trailer for the Dr. Who Christmas special, The Time of the Doctor, here.

File this under Needed This When I Was a Kid: this understandably overfunded Kickstarter for Australian start-up Squishy Forts. Yes, those are structurally reinforced cushions designed explicitly for fort-building. Hell, forget being a kid...those would make an excellent addition to our Game Haven right now.

As always, best wishes for an awesome week ahead. I leave you guys with this amazing video footage from the JUNO spacecraft.