With finals complete and this semester in the record books, I can roll up my sleeves and get to some serious postin'.

And this post is to cater to the gamers.  I present to you, Fealty! 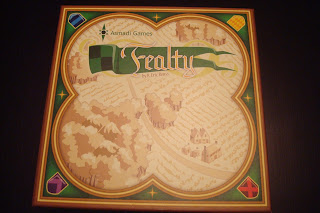 Fealty comes to us from the good people at Asmadi Games, the guys behind We Didn't Play Test This At All  (which, they totally do) and Win, Lose, Banana. The basics break out as follows:

The game combines some of the best facets of older strategy games, namely the point-capture aspects of Go and the piece variety/versatility of Chess, while keeping overall playtime brief via a strict turn limit. Unlike most such strategy games, Fealty can accommodate more than two players and has two distinct options that allow for difficulty to be easily scaled based on the quantity and experience level of said players (board size and piece options). It's fun, it's fast, and it gets the old neurons firing. I won't recap the entirety of Fealty's rules, but the elevator version of the game is as follows:

Players first select a representative color (blue, yellow, red, or purple) and a correspondingly colored deck of nine cards. There are two complete decks of nine cards for each color, the Missives deck and the Suns deck, but only one such deck is used at a time and players choose between them via consensus before the start of the game. Each card within the deck provides critical information concerning the abilities of a token denoted by a name and number that matches that on the card. The constraints outlined on each card will allow players to decide how and where to place the corresponding tokens on the board with the ultimate goal of capturing as much of the latter as possible.

The selected decks are shuffled, then placed face down before the individual players. Players draw a hand of three cards from the top of the deck, which then present three different options for play. After inspecting the cards, players will decide which token they would like to place on the board by selecting the corresponding card from the three available in their hand and placing it face down in front of them. Once all players have made their choices, all selected cards are revealed en masse and the matching tokens are placed (order of placement depends on the individual cards revealed). Once each player has placed one token a new card is drawn from the top of the deck (bringing the player's hands back up to three apiece) and the process is repeated. After eight such rounds, the board is then systematically divvied up between the players in accordance with the abilities of each token placed. The player who captures the most territory wins.
It may take a practice round or two before you are comfortable with A) the basic abilities of each of the nine tokens and B) how those abilities synergize with the overarching rules of the game to present viable strategies for winning. It's recommended that new players begin with the simpler Missives desk to help speed the familiarization process along and that's some advice that I heartily echo. Though the game can be easily picked up the jump in difficulty between the Missives and Suns decks is marked so your best bet is to stick to the Missives until you're ready for a fresh challenge.

The variety in available terrain (there are several different board conglomerations) combined with the abilities of the individual pieces and the element of semi-randomness (which cards get drawn and in what order) makes for a very high degree of replay ability. Games tend to be very fast, so it's easy to get multiple matches in a short period of time. That being said, the sheer quantity of possible play combinations occasionally causes a bit of confusion as to who is entitled to what territory. The FAQ in the rulebook addresses most, but not all, of these situations (which can be an opportunity to create some kick-ass house rules). Also, though Fealty is designed to be a quick play, 4-player games can often exceed the 40 minute mark so it may help to set some guidelines about turn length before the start of the game.