Posted by Kel
Holy December Batman. Seriously, how are you here already? Apparent distortions in the space-time continuum notwithstanding, I hope you're all having great weekends and wonderful holiday seasons thus far. Before we all dive back into our respective yuletide preparations let's get down to the Week in Geekdom.

Neil Gaiman's landmark graphic novel, the Sandman, turned 27 on November 29th. Here is why said work remains in a class all its own nearly three decades after its publication. 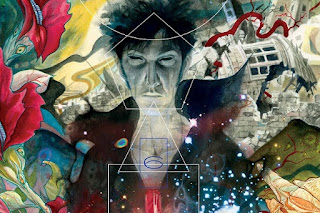 The city of Cleveland has some concrete, or potentially Kryptonite, plans to honor the Man of Steel.

Behold the first trailer for the Final Fantasy VII remake!

We gave this announcement plenty of love over on our social media pages, but it's definitely worth revisiting. 2016 will see the return of Samurai Jack!

Speaking of returns in 2016, DC would like to remind us that Batman vs Superman will be coming our way in the not-so-distant future.

Check out these incredible images/videos of Italy's Mt. Etna, which erupted in spectacular fashion earlier this week.

It's been a few weeks since we had some new images of Pluto from New Horizons. Well, if you're a fan of the dwarf planet it was worth the wait, as the latest batch of pictures are the sharpest we've seen yet.

When you think of commonly occurring elements in the known universe, you may think of Hydrogen and Helium, but would you correctly guess that this is the element that would come next in that sequence?

While we're...sort of...on the subject of helium, the ultralight element is proving to be the key ingredient in next-generation high-capacity storage drives.

We talked last week about the burgeoning 'war' of privatized space exploration, but here's a far less bellicose facet of the Blue Origins side of things guaranteed to make you smile: the reactions of the 400 scientists and researchers that worked on their firm's reusable rocket.


We've talked a bit over the past few weeks about the centennial of the publication of Einstein's Theory of Relativity but, if we get right down to it, what is spacetime...really?

For decades researchers have been stymied by the concept of cosmic microwave background radiation, as it has proven incredibly difficult to detect by direct means. The latest edition of Nature presents what may be the solution to this mystery.

Turns out that your appendix may not be a useless evolutionary vestige after all.

In honor of 'Giving Tuesday' Jason Gidman, the host of 'DC All Access', launched a campaign to send 10,000 comic books overseas to provide some much-needed escapism and entertainment for actively serving military personnel. Want in? Here's how you can get involved.

Ever wonder just how much either of the Death Stars cost or just would have happened to the Galactic economy following the destruction of said superweapons? The School of Engineering and Applied Science at Washington University in St. Louis gave their best crack at coming up with a comprehensive response.

Mattel has brought back the Viewmaster in time for the holiday gift-giving season and the latest incarnation of this classic toy is a bit different than what you may remember.

This Lego-based kinetic sculpture of Sisyphus is both stunningly realistic and somehow very soothing to watch.


As always, best wishes for an excellent week ahead!