Posted by Kel
So it may seem like there have been far too many mentions of the costumes that will be making the trip with the GIR and I out to Gen Con, but very little beyond that. There are a couple reasons for that, one of which we’ve discussed a handful of times. The large size and multiple intended wearers of the Gen Con cosplay cache prompted me to tackle construction of the outfits a little differently than if I were making just one costume for a single wearer. This time around I’ve been plugging away on each costume at intervals so each of the three remain around the same level of completion and we’re at the point where all three are nearly done. Given all that, we can finally start talking about the last two costumes and how they came together.

The GIR and I have a long-standing and deeply-rooted affection for The Venture Bros. It’s watched, re-watched, and quoted on an extremely frequent basis in our house. We’re those crazy people who have convinced ourselves that the 2+ year breaks between recent seasons aren't frustrating but, rather, are some sort of test of our devotion. We regularly debate swapping our trip to Gen Con for a sojourn to Dragon*Con solely because the latter is the only convention regularly attended by the show’s creators: Jackson Publick and Doc Hammer. That substitution won’t be happening this year though, so Gen Con will be subjected to our fanaticisms. We’ll be cosplaying as Dr. Mrs. The Monarch and a Henchman (he refuses to say it’s 21 and instead claims he’s 28 or another semi-canonical member of the Fluttering Horde). The rest of this post will focus on the GIR’s Henchman costume and there’ll be a separate entry for the Dr. Mrs. outfit.

The Henchman is pretty much the standard issue uniform for minions of the ‘mighty’ Monarch. This uniform consists of a black unitard-like body covering, a yellow tunic, a yellow utility belt with a Monarch logo buckle, matching knee-length boots and elbow-length gloves, a mask, and a set of orange wings affixed to the wearer’s back.  Let’s look at each of these pieces.

The henchmen wear something that’s technically somewhere between a catsuit, a unitard, and a zentai. The garment features sleeves, leg coverings, and also a hood that covers the wearer’s hair, but not their face. You can re-create this suit using the techniques described in this post, specifically those on Tim’s excellent site as he creates suits for a male build. I highly recommend that, if you’re going this route, you use a Spandex/Lycra with a 4-way stretch and a medium weight. The fabric needs to be opaque, but it’s a good idea to also use something that can breathe a bit since so much of the wearer’s body will be enveloped in it.

If the premise of working with stretchy fabrics is terrifying or you’re otherwise not inclined to sew the suit yourself, there are a number of online outlets that offer ready-made suits. This one is a particularly close approximation and has the added benefit of hand/foot/head coverings that are detachable from the main suit. The one caveat I’d toss out there for Milanoo.com or similar online vendors is that you should place your order with them as soon as you can. It’s not uncommon for an order to travel for 6-8 weeks before it arrives at your home.

The henchmen wear a yellow sleeveless one piece over their black body covering. I call it a tunic, but really it’s more of a jumper or a romper than anything else. Think of it as a tank top and a pair of shorts combined. If you happen to own those two garments already, they can serve as ready-made templates for your pattern; just trace their outlines onto muslin or any other type of very cheap fabric, cut out your stencil and you have a nearly complete pattern. Alternatively, you can purchase shorts and a t-shirt or tank top and alter them. I recommend this and this from American Apparel, as that brand produces a color (Gold) that’s a near match for the yellow used in the show. If you do decide to purchase items, it’s a very good idea to buy them in person or order them online at the same time. Staggering your purchases increases the chances that you’ll receive items from different dye lots, so you could end up with two pieces in two distinct shades of yellow.

While you could choose to merge the top and bottom together into a single garment, it’s better from a functional standpoint to keep them separate. Seriously, no one wants to wrestle with a one piece when they’re trying to go to the bathroom. The belt will hide the seams between the pieces anyway. Speaking of which…


All henchmen sport a utility belt that’s a slightly brighter hue of yellow than the tunic; most belts feature at least one pouch in the same yellow (usually worn on the left hip). I bought a cheap leather belt and covered it with this yellow PVC fabric. Once the belt was suitably yellow, I attached the buckle with two phillips-head screws through the leather itself (obviously, the buckle is largely for show). I kept the real, functional buckle on the belt, but positioned it so it opens along the wearer’s spine. This not only presents a clean line when the belt is viewed from the front, but helps provide support for the wings, which will get to in a moment.
I was all set to make the mask (as well as the buckle) and was planning to do so with a combination of foamstock and air-drying foam clay, but happened across Etsy seller cinemamasterystudios who had already invested in a mold for casting both the mask and the belt buckle. His prices and proposed delivery times were very reasonable, so I decided to commission both pieces from him. The finished pieces are both extremely high quality plastic/resin, particularly the colored lenses on the mask (getting good, clean, evenly colored lenses tends to be the trickiest part of making a mask). 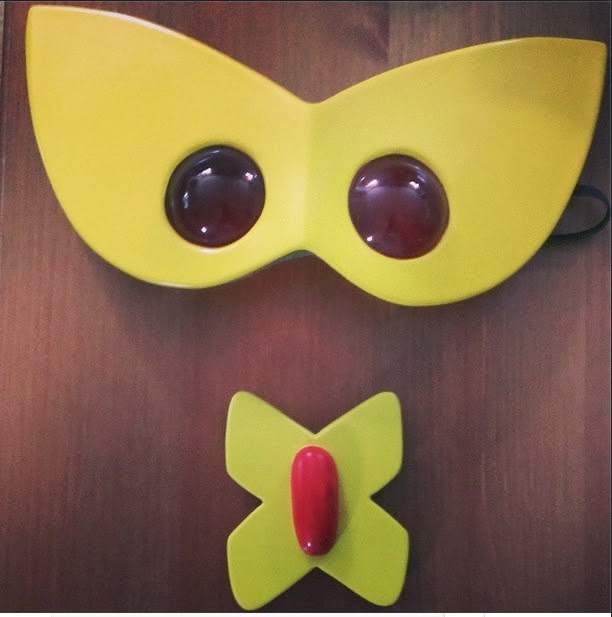 The boots are just these. While I had enough PVC fabric to make covers for existing boots, the GIR ended up finding very reasonably priced, fully functional boots that came in the right shade of yellow. Similarly, the gloves are run-of-the-mill dishwashing gloves. Why not invest in costume pieces that can also pull real-life duty?

Sprouting from the heads of each henchman is a set of yellow antennae. To re-create these, I twisted two 18” (45.72cm) pipe cleaners together, then folded the twisted wires in half and twisted the two new halves together. I repeated that process to end up with a pair of 9” (22.86cm) wires, which I then wrapped in masking tape. Using hot glue, I stuck 1/2” (1.27cm) wooden beads to the end of each wire, then added color with some yellow spray paint on the whole shebang. The finished antennae were then wired onto a large headband, which I then glued into the inside of the hood of the body covering. 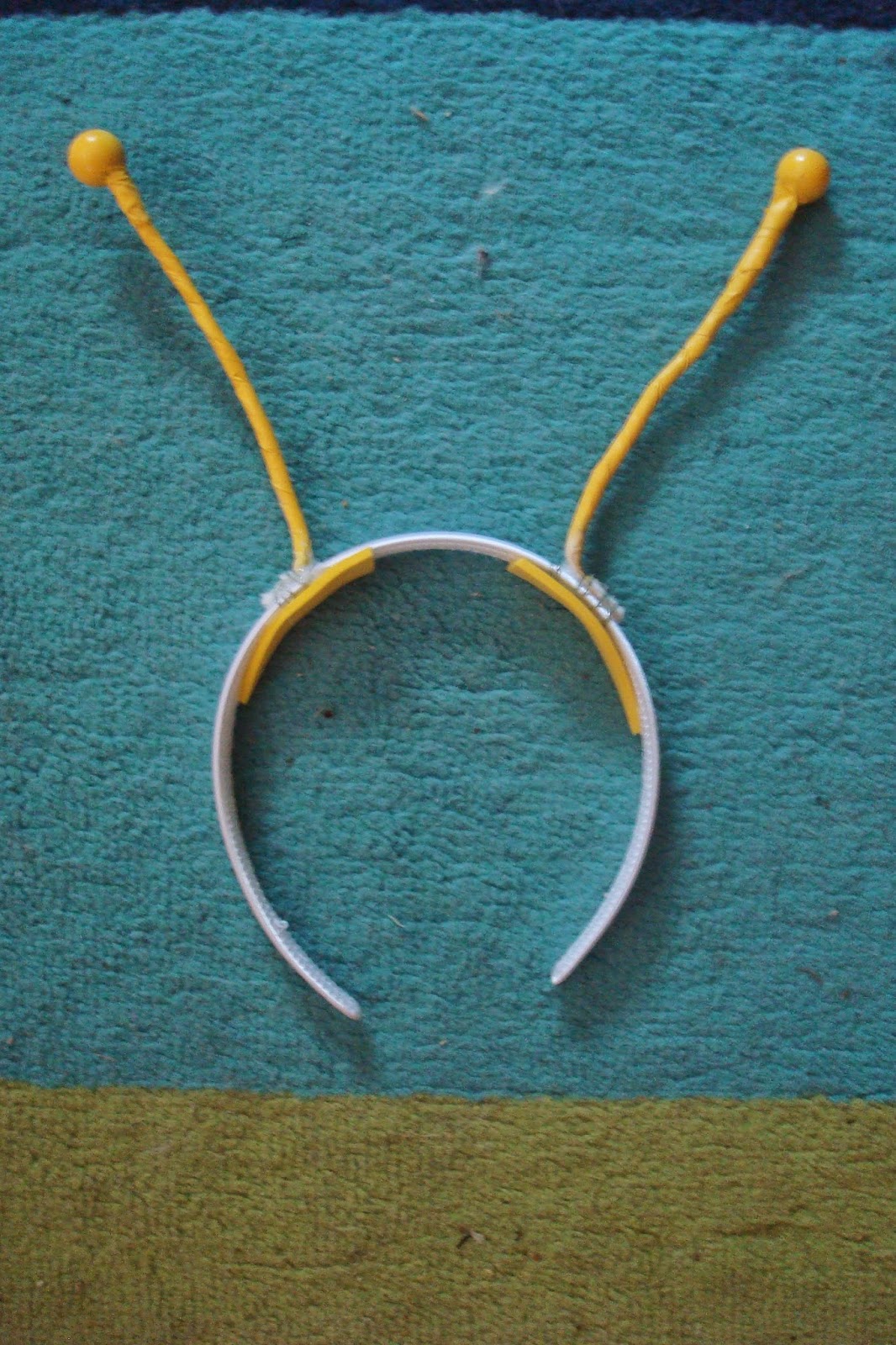 Wings are one of those challenges that cosplayers tend to put in a category all their own. It’s no coincidence that most of us would consider making a set of wings to be a Major. Though I was initially gung ho to make a set of fully deployable wings for the GIR, I ended up making simpler, pared down version instead. Since we have to ship them out to Indy, it makes sense to have the wings be as uncomplicated as possible. It would have been gut-wrenching to create deployable wings only to have them be damaged in transit. Fewer parts = lower probability of catastrophic failure (hopefully).

Though they don’t have any extending mechanisms, and thus didn’t require me to build a custom rig, the wings still needed to be wearable and self-supporting. The easiest way to create a wearable foundation is to start with something that’s already been designed to be a garment and carry weight, then modify it to your needs. I began with a simple black backpack bought out of a clearance bin at a local TJ Maxx. The backpack is a sturdy blend of canvas and nylon, so it seemed as though it’d be up to the task of toting wings. I reinforced the primary straps with additional strips of nylon webbing (think the fabric version of the plastic straps you see wrapped around large packages) then layered foam on the underside of the straps to prevent them from digging into the GIR’s shoulders.
Since the backpack is made entirely of fabric, some rigidity would need to be added before it could feasibly support wings. I used a 1” (2.54cm) 3-ring binder as the core of both this support and the hinging mechanism for the wings themselves. The binder was essentially gutted for its components. I removed each of the covers, leaving the metal spine, then arranged the covers atop one another until they were the exact size of the inside cavity of the backpack. The covers were then permanently affixed in that configuration with a combination of hot glue and the absurdly toxic adhesive leftover from the construction of the Transistor. Once the glue had dried, I slipped the new support board into the backpack, then had the GIR try it on to test the weight and measure where it fell against his back. From there, we decided where the wings themselves would need to hinge in order to look right.

With those measurements in hand, I took the board out of the backpack and glued the metal spine of the binder horizontally across the board at the point where we wanted the wings to hinge (just below the GIR’s shoulder blades) using the same combination of glues. Once the spine was secure, I opened the rings and slid the board back into the backpack, marked where each of the open rings pressed against the fabric of the backpack, then made tiny cuts and pulled the rings through. I then used the glue concoction to permanently adhere the support board  to the inside of the backpack. 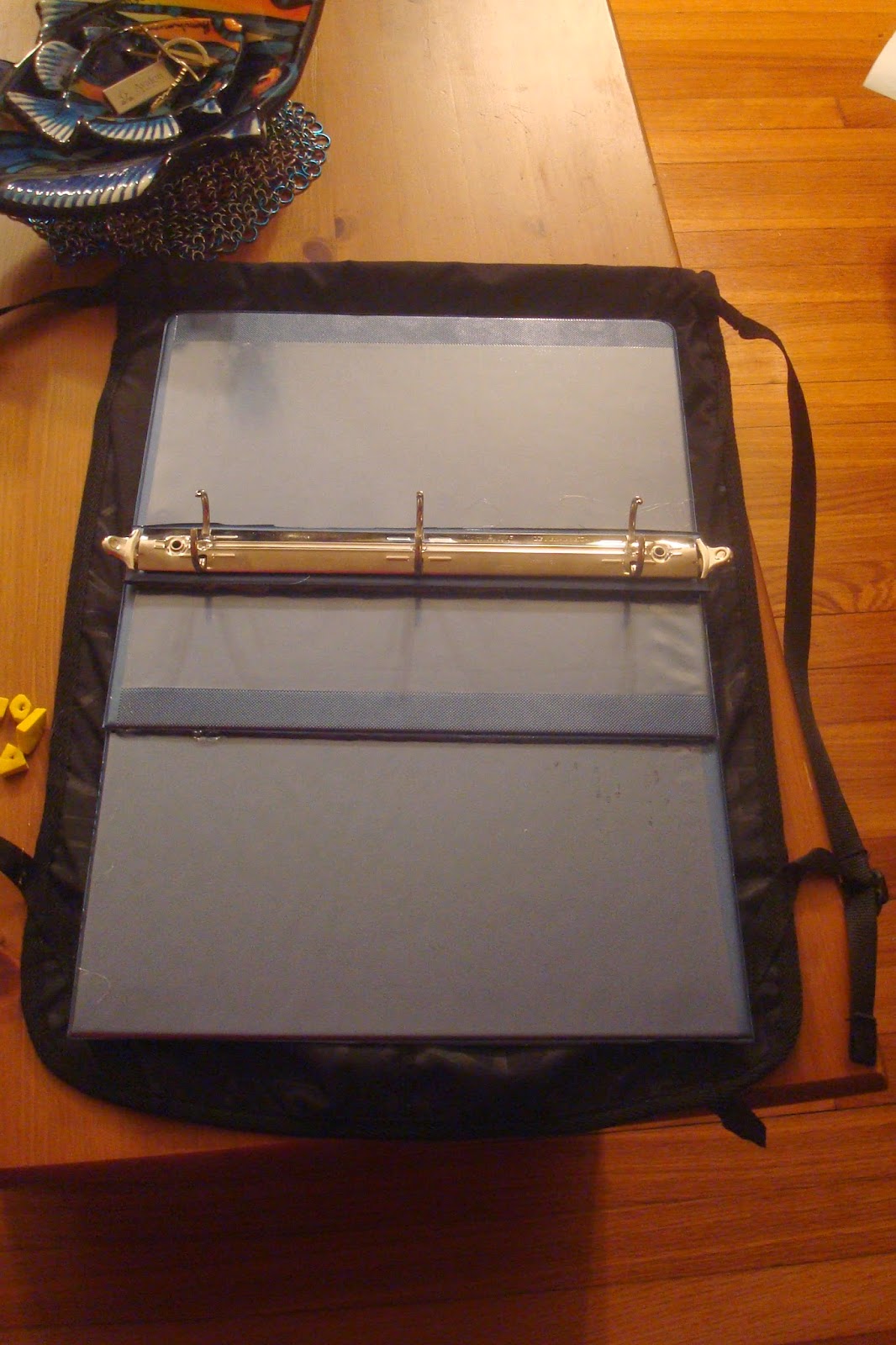 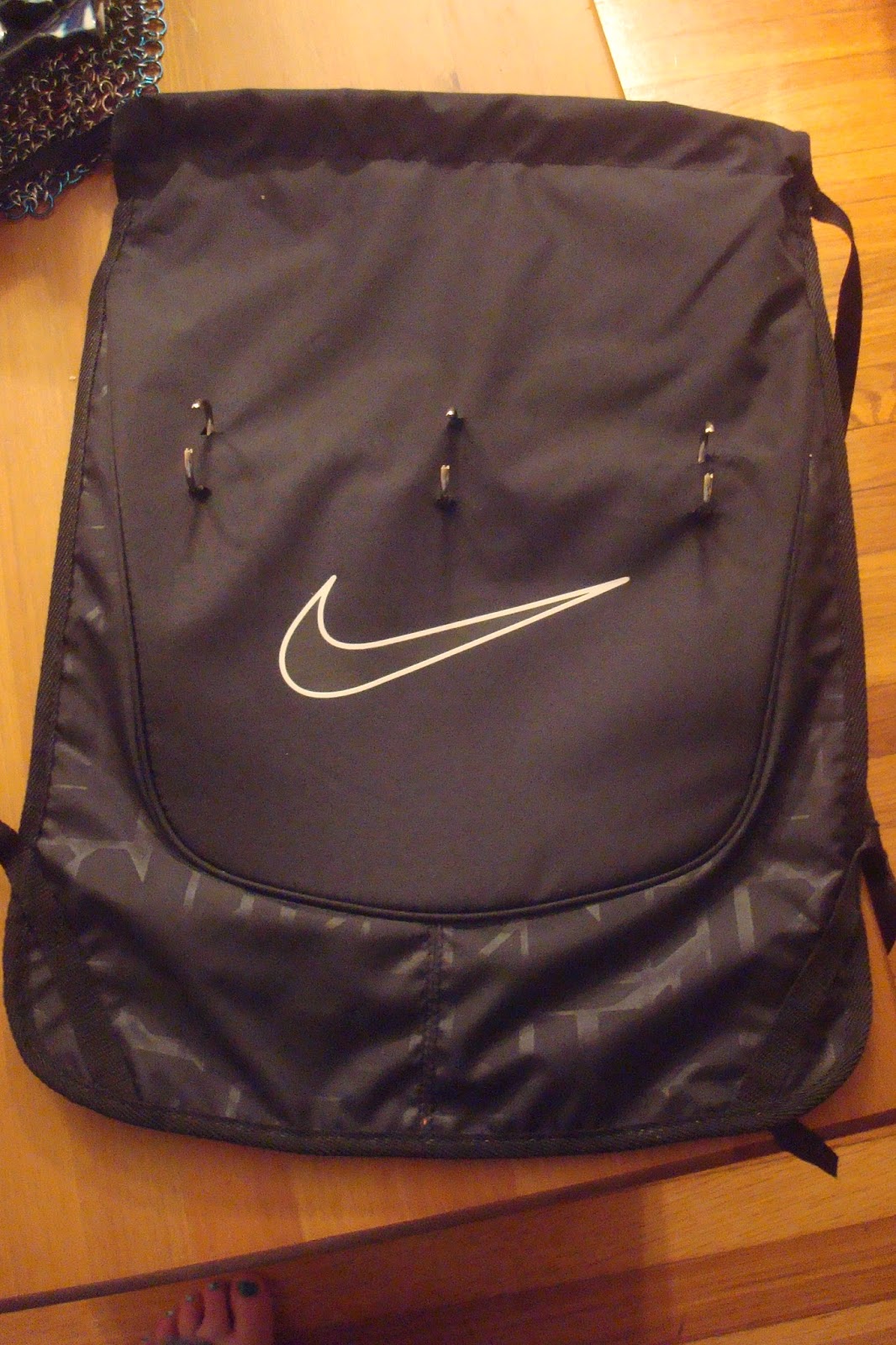 The wings themselves are just two sheets of foamboard cut with a utility knife into two pairs of semi-ellipses. I blended two different acrylic paints to get a shade of orange that appears pretty close to that used in the show and it then took 3 coats of the paint blend to get the wings evenly colored. After the paint had dried, I used a leather awl to punch holes in each pair of wings that aligned with the rings of what used to be the metal spine of the 3-ring binder. I then cut small circles of foamstock and used hot glue to affix them around the holes in an effort to reinforce and protect them. After that, it was just a matter of coaxing the wings onto the metal spine and snapping the latter closed. 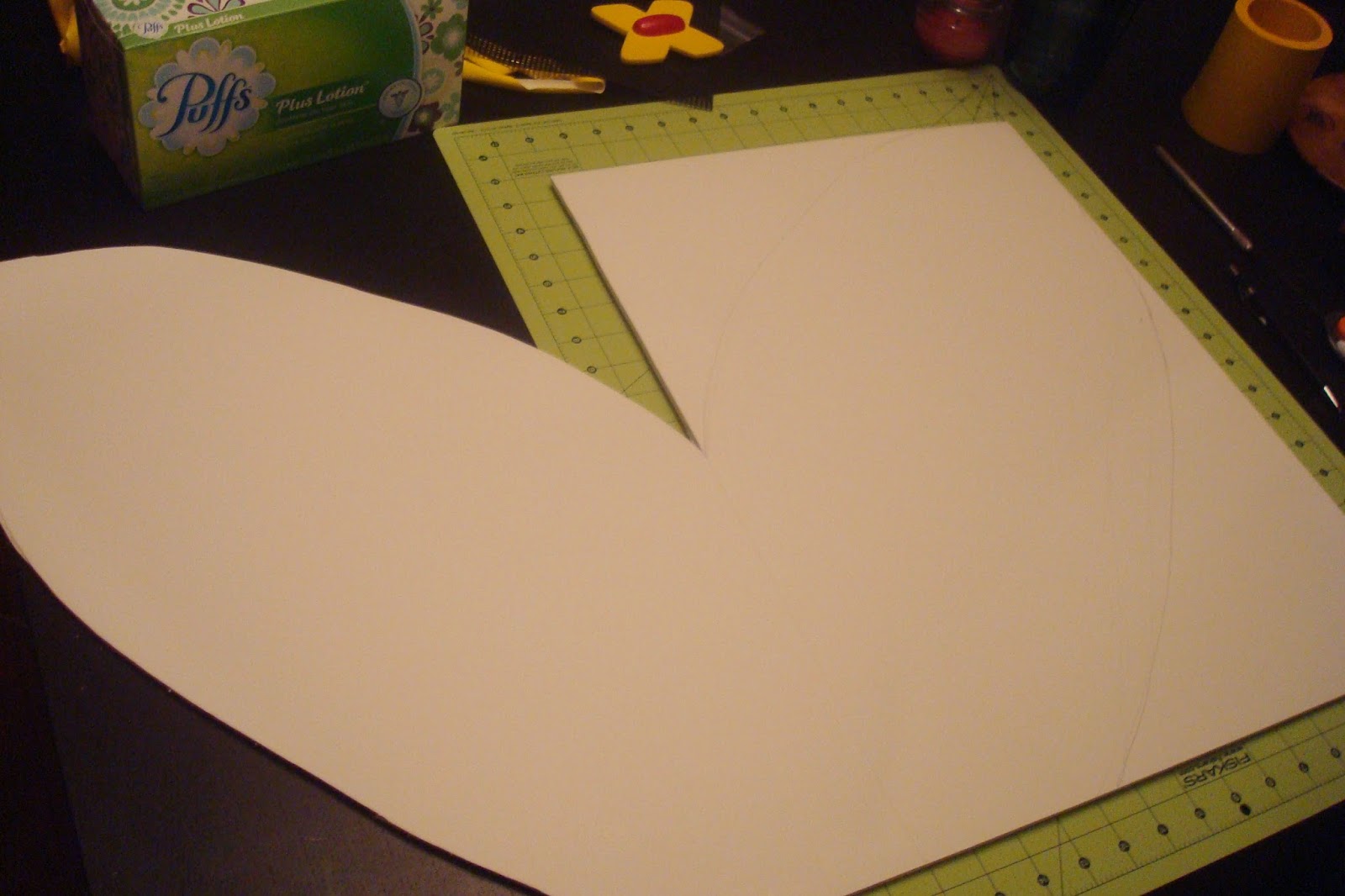 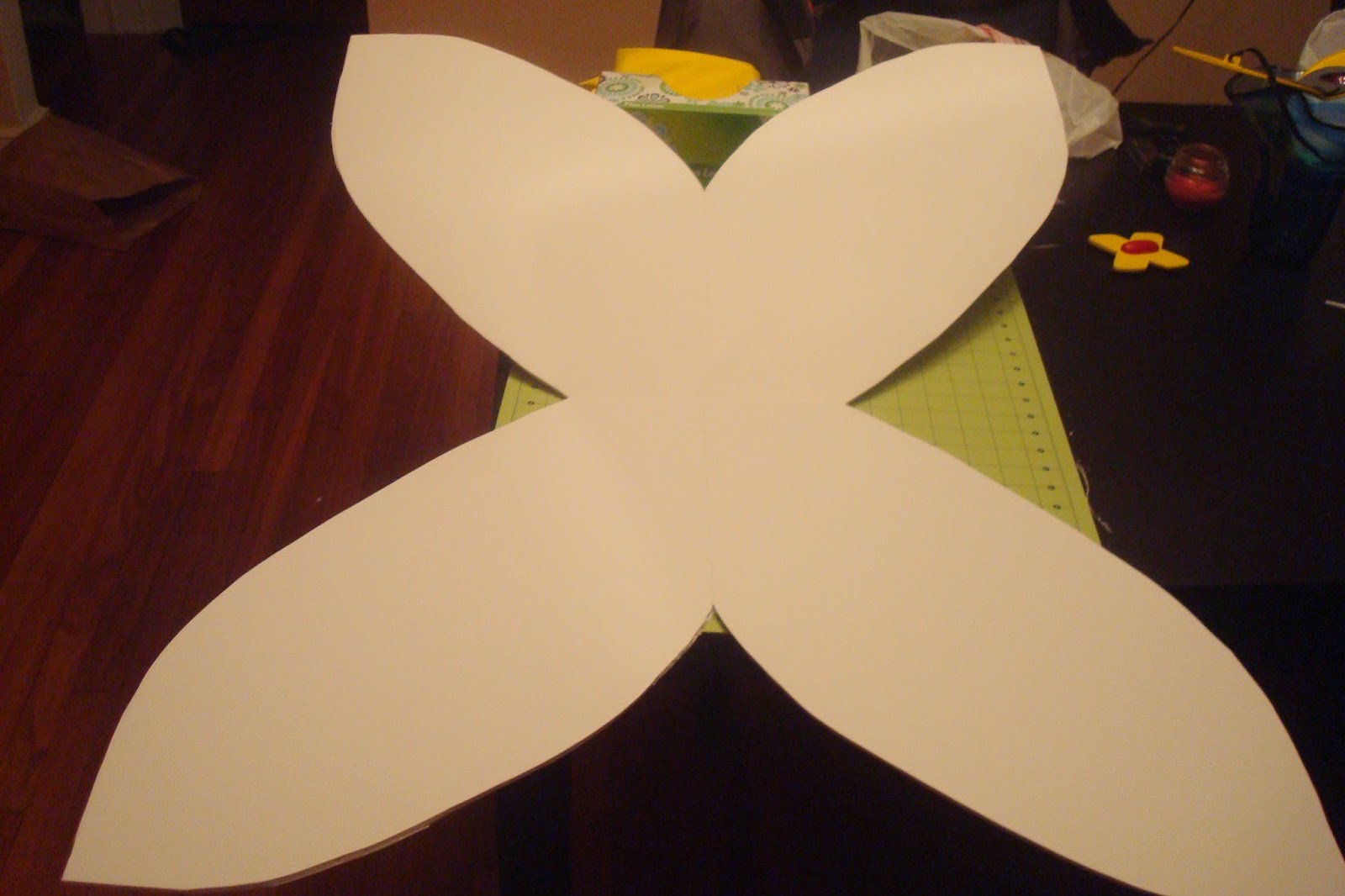 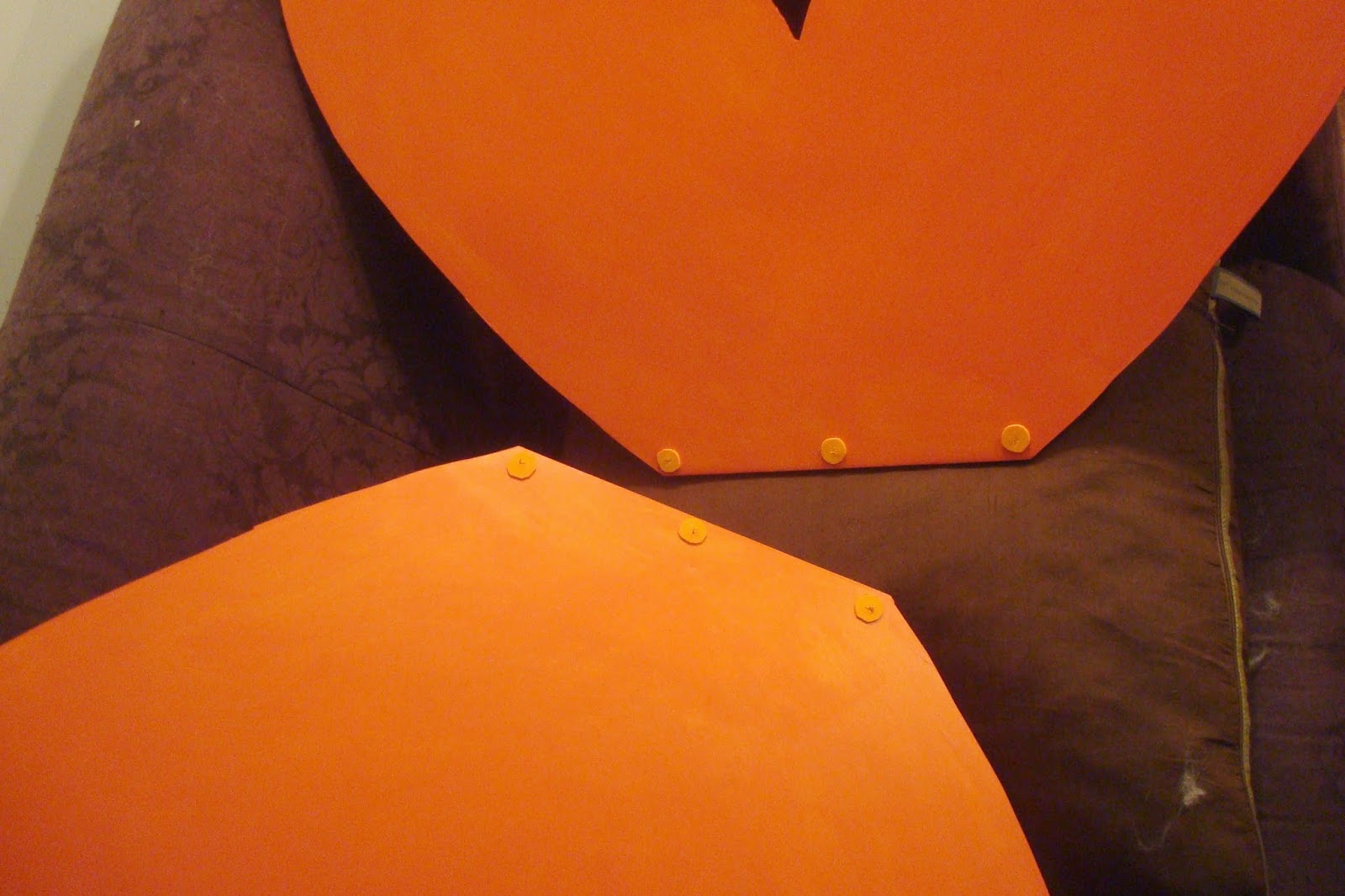 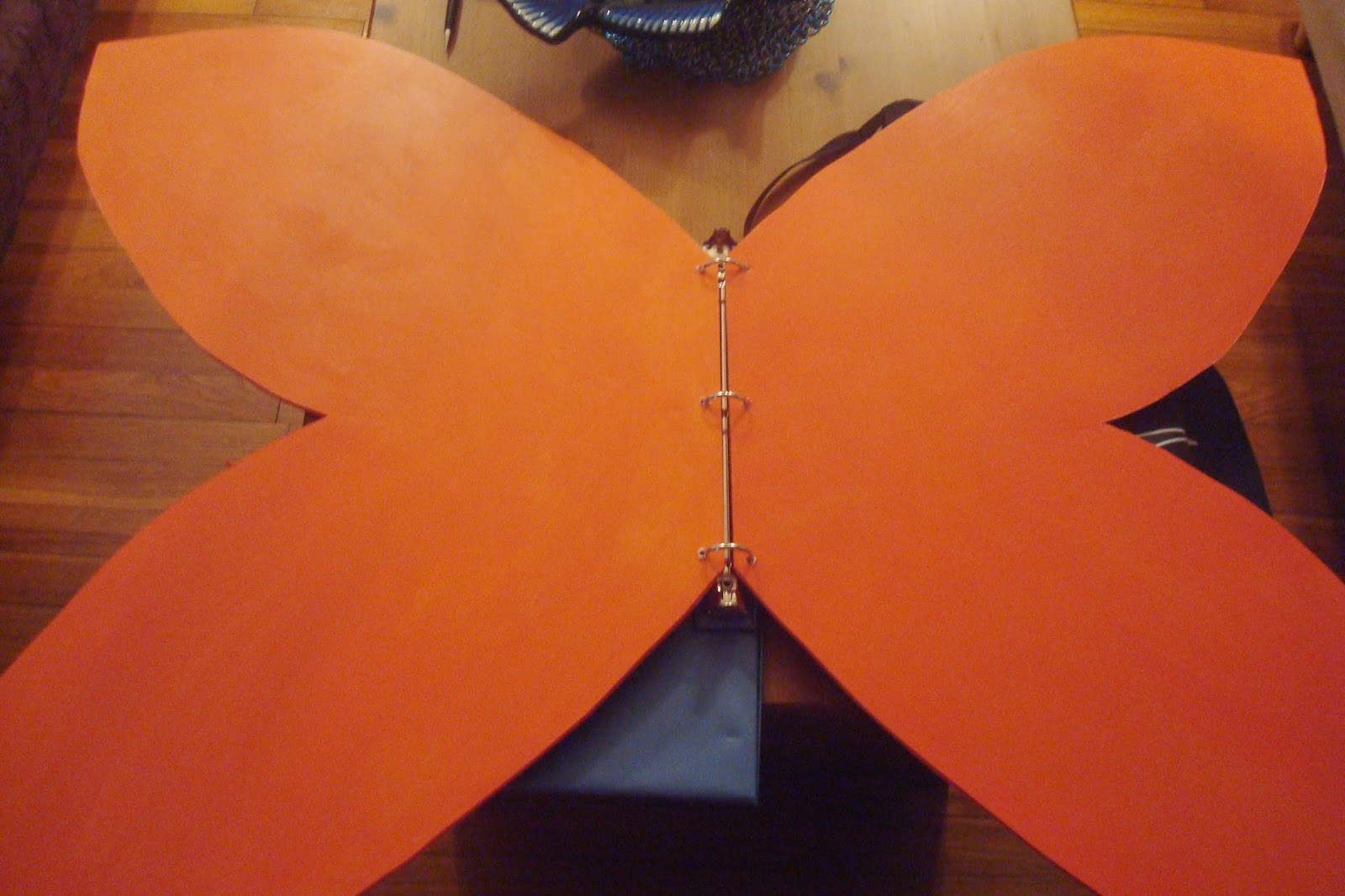 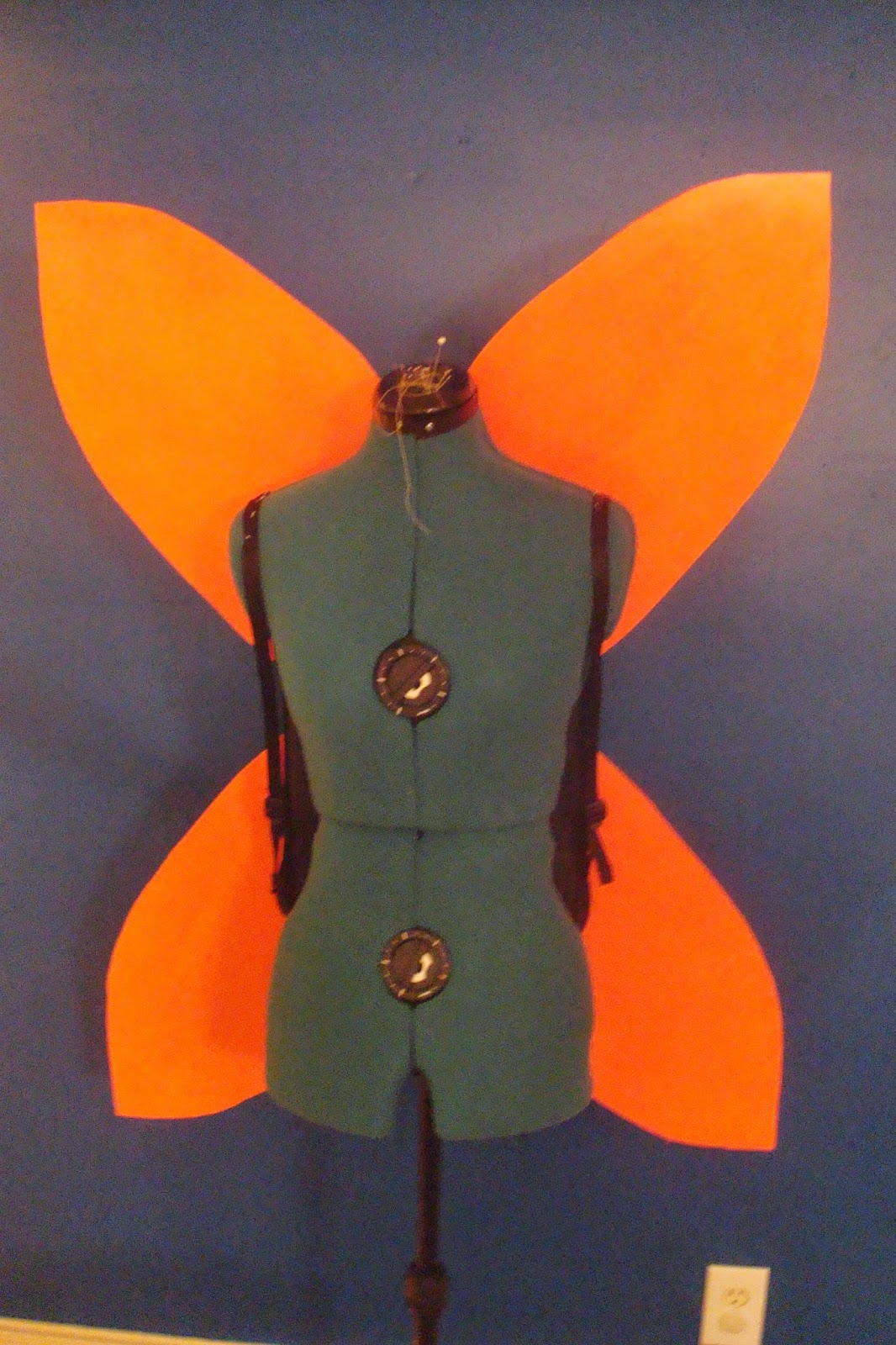 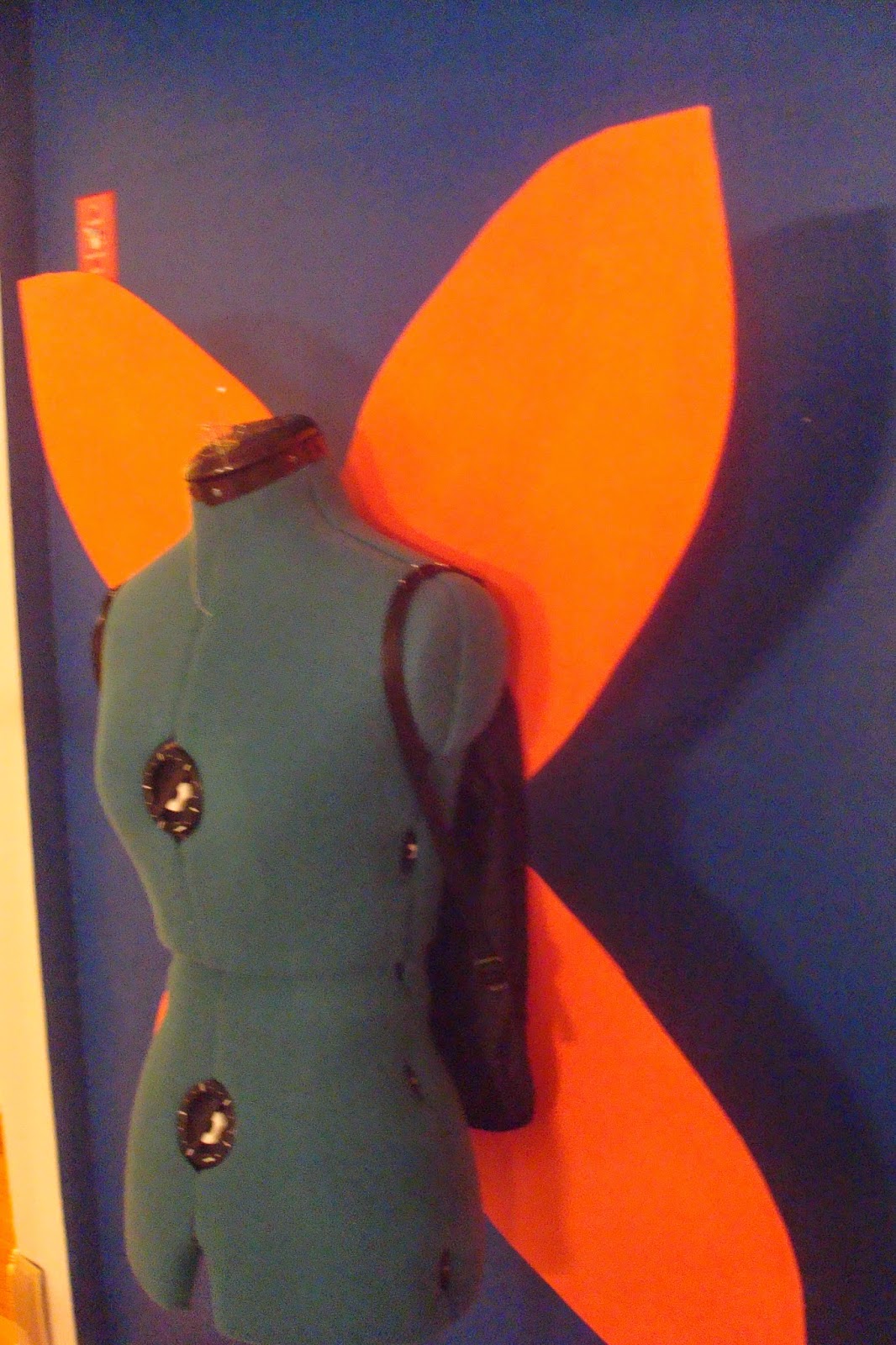 Woot! Here's hoping the costume survives being shipped out to Indy!

Post Con Breakdown: Every part of the costume held up extremely well and can easily be used again. The only things I'd change would be to add some reinforcing on the pouch in the GIR's utility belt and some more support to help keep the wings vertical. While they performed admirably, the wings were looking decidedly wilted by the end of the day. Some added foam around the binder rings should prevent that from reoccurring.