Posted by Kel
With exactly three weeks left to go until Gen Con 2014, is it officially costume o'clock. While I'm feverishly sewing/gluing/engineering (posts on all this to follow!), my friend Oliver graciously crafted the post below. This marks the very first guest post on the blog. It's a thorny subject that we touched on in a broader sense last year and Oliver breaks down a few of the other, often darker ways that certain dichotomies and assumptions can manifest. I'll let Oliver take it from here.

Good day to all the readers of The Care and Feeding of Nerds.

When my mind is free from its various other duties and concerns, it has been tangled around the issue of violence in our society.  My frustration at the violence is linked inexorably with its seeming ubiquity; while the number of violent crimes has been going down since 1993, the importance of the isolated violent events in terms of the public increases with direct proportion to attention provided them by various news outlets.  Simply put, the news focuses on islands of violence and makes them seem like ever-present continents.

I wish to talk about the violent gunning down of 6 people and the stabbing of three men in University of California, Santa Barbara.  This killing is unique among other killings, and please read that last phrase again later and know how hard and sad it was for me to write.  There should be no reason for me to indicate a killing is unique among others; there should not be a large enough sample size for that.The killing spree was horrific, with three gentlemen stabbed, followed by many women and men shot, seemingly at random, simply because they were in the wrong place at the wrong time.  The killer; here unnamed as constructing the soapbox out of violence and death is too common, and should be discouraged until eradicated; was purportedly killing people because he was angry about the many romantic rejections he had faced.  He felt entitled to a relationship, and bemoaned the fact that other men were involved in relationships and having sex.  It was a big party, and he wasn't invited.  He put up Youtube videos explaining his feelings, as well.
His frustration at being "denied" what was "promised" is not unique to him.  There is a community like him, and the even have a name- Incel, or Involuntary Celibacy.  The people of the Incel community feel that, despite their best efforts, they are "the state of a person who has not established an INTIMATE RELATIONSHIP or engaged in sexual intercourse for reasons other than voluntary celibacy or sexual abstinence. The term is used especially for adults who, despite general expectations, have had little to no sexual or romantic experience."

I want to focus here on why this community exists, and how it could create a person like this killer.  The Incel community claims that it is the "general expectations" that are causing much of this frustration.  Does society have general expectations for people regarding sexual intimacy?  Deeper into the Incel website, they clarify that the problem is not a lack of the sexual act, but a lack of touching and affection that goes along with committed relationships. Are all of these things linked and if they are not, why do people in the Incel community believe that they are? 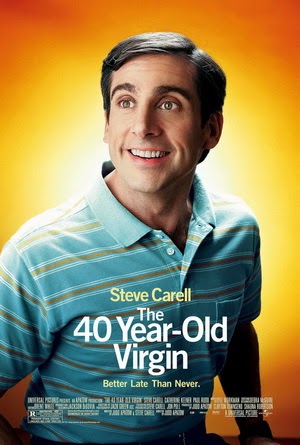 As this is a fantastic nerdy blog, let's focus this topic by using a movie many nerds have seen, and many quote often: The Forty Year Old Virgin.  What in this movie could be encouraging the world view that people of the Incel community believe is so prevalent in society?  What does this movie say about nerds?  Does it portray nerds realistically?  Let's find out!

In the movie, Steve Carell plays Andy, the titular virgin.  He works at an electronics store, a la Best Buy, and he is their stock boy.  His life, while simple, seems to be fulfilling.  He appears to have identified his personality strengths and uses them daily.  He cooks, keeps his place clean, follows his hobbies, the majority of which would likely be considered nerdy (playing the tuba, biking, collecting action figures, playing video games, painting miniatures, and apparently playing a good amount of online poker).

As the movie continues, and his secret is discovered, his new "friends" try to get him laid, because they feel he needs this in order to be an adult.  They get him involved in public urination, heavy drinking, making and using an apple bong, and some pretty sleazy "pick-up artist" moves as it is, "...in the male DNA to fuck drunk bitches," according to Andy's 'friend' Jay.

Andy does fewer and fewer nerdy activities as the movie progresses, with his friends even cleaning out his apartment before his hobbies are discovered by his paramour, which they assume will result in the immediate termination of their courting.  The movie makes a clear distinction between nerdy activities (painting miniatures, playing band instruments, video games, etc.) and adulthood.  Seth Rogan and Paul Rudd's characters are shown as perpetual adolescents. They play video games at Andy's place, Mortal Kombat, to be precise; and they discuss how they 'know' the other person is gay.  While the dialogue can be amusing, it underscores their immature viewpoint of the world.

The ultimate indictment of nerd culture as a non-adult pastime comes when Andy and Trish, Andy’s paramour, discuss their future.  Andy wants to open up his own electronics store, and Trish encourages him to sell his action figure to fund his dream.  Her support of Andy is wonderful; one just hopes that he can continue collecting again when money allows it.

Andy and Trish marry, and Andy does have sex.  Thankfully, the marriage is shown as an acceptance of two people' faults and strengths, and not a "winning over" story as is common in many movies.  Andy does not win Trish as a trophy, but Andy and Trish marry after they discuss their dreams and fears. Andy bonds with Trish’s daughter, Maria, by Andy hiding the fact that she is pregnant from Trish, and Maria hiding the fact that Andy is a virgin from Trish.  Eventually, all the news comes out, but the bonding that happens here creates more dimensional characters, and avoids the 'trophy winning' trope so prevalent in romantic comedies (and which we'll address more in a second).

This movie created comedic ripples in the mid-2000s which continue to reverberate through today's cinema and invites us to question our view of nerds, adulthood, and sexuality.  This movie, and others of its ilk, have likely had an influence on the incel community (the Wikipedia page uses involuntarily celibate as the main descriptor for Andy).  It is this belief that sexuality is a "rite of passage" for adulthood that spurs much of this violence and misogyny in the incel community.  What to do about this incorrect belief?  We need movies and books that show sexuality as a personal choice, and show women as fully fleshed people worthy of respect, and not trophies to be won at the end of the film.

What is it about American culture that links sexuality with adulthood, and eschews the trappings of nerdery in favor of those of adulthood?  I believe that as much as nerds are mainstream, with movies made, games played, and conventions attended; this is an economic move more than a cultural one.  The approval of nerd culture exists only insofar as it can be monetized and constructed into commodities.  It is ok to be a nerd as long as you go to conventions and buy all the stuff, just put it in your house and don't invite people over.

Oliver maxed out his charisma stat and, as such, specializes in conflict mediation and interpersonal communication. When he's not training to be a ninja (yes, seriously) you might find him writing for and working with the Red Kite Project.