Hi out there to everyone in Readerland! If you've been following the blog for a bit, you might recall that every three months my life gets consumed by a battle with an Elder Hydra. Ok, so the hydra is figurative but the net effect is the same: long hours spent hacking away at an entity that just...won't...die. This particular iteration of the recurrent battle is especially heinous, mostly for reasons I won't bore you with, but also a couple of legitimately awesome reasons that I'll share in my next post. Speaking of which, the next installment of this here blog will be published in a couple of weeks rather than exactly a week from now. Why? You'll find out soon enough, I promise. I also promise that the blog will resume a regular posting schedule immediately after the break. So just hold tight after today.

Though my conflict with the hydra has taken up most of my time these past couple of weeks, I've not been left completely in the dark with regard to Geekdom. The wide array of interactive options and press coverage provided me with a much-needed escape from the winter doldrums and brought me a live feed of the Consumer Electronics Show (CES) out in warm, sunny Las Vegas. That spectrum of show and participant feedback was particularly helpful in navigating the torrent of company updates and product announcements that flood out of the show every year. Unfortunately, also in keeping with CES tradition, a considerable percentage of the novel items that made their debut at the event are barely past the prototype stage and won't be available for you or I to purchase anytime soon. Is it awesome to catch a glimpse of what the future may hold? Sure thing. Isn't it also a bit of a tease to have such things paraded about, only to be told they're years away from actually being sold? Very yes.

Alternately stymied and excited, I wanted to share the details of a new gadget that's actually available for purchase: the Nexus 10. Released to the market at the tail end of 2012, the Nexus was to be Google's (made by Samsung) rebuttal to Apple's iPad 4 and Amazon's Kindle Fire/Fire HD. Is this salvo into the increasingly competitive tablet marketplace a solid one? The answer is a resounding yes. 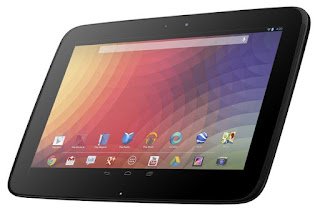 For quite some time, the debate had been, "Do we get a tablet or a laptop?" Both offered same desired features: high levels of portability, a plethora of mobile entertainment options, and all the means to remain connected with family and friends. The laptop ostensibly offered more traditional computing (full versions of PC games and word processing capabilities) while the tablet wove all the features of a smart phone into the conveniences of an e-reader. The latter gave me pause; wouldn't a tablet then just be a larger version of my Android phone? While the Nexus does perform many of the same functions as a smart phone, the features it offers that go above and beyond that ground my cynical suspicions underfoot. The following points detail just how the Nexus 10 went about doing so.

Product Specs: The Nexus 10 boasts a 10.1 inch (25.65 cm) screen with a 2560 x 1600 resolution, a measure that tops even the iPad 4. It runs on the Android Jelly Bean 4.2 OS, has a 1.7GHz Exynos 5 (Cortex A-15) dual-core processor, Mali T604 graphics chip, and 2GB of RAM. It's bigger than many tablets currently available, so it will feel quite large if you're presently using a Kindle, iPad mini, or a Nexus 7. Despite the size, the tablet is hardly bulky and weighs in at only 1.39 pounds (630 grams). The actual chassis of the tablet is surprisingly pleasant to hold, offering significant friction against the hand that allows the user to feel entirely comfortable holding the device.

Audio/Video: The speakers on the Nexus are on the margins and the back of the tablet, as is typical of many Samsung offerings. The audio quality emanating from said speakers is decent, but not superb. A pair of headphones easily smoothes out any auditory roughness. The Nexus also features a 5 megapixel back-facing and a 1.9 megapixel front-facing camera, which allows for everything from photo snapping to video chatting and recording. The microphone on the device is remarkably sensitive and could certainly be used to capture even highly nuanced songs or other audio.

Media/Apps:  The Nexus aptly handles video from Netflix, the Amazon Prime library, and Hulu/YouTube. Any hiccups I experienced while watching episodes of Archer or Futurama were almost exclusively due to internet connectivity blips rather than the Nexus. The picture clarity was amazing and there was no distortion, regardless of the viewing angle. The available apps are largely the same as those available on any Android phone with the sole exception of the Amazon suite of applications, which was a bit disappointing. Note: the Kindle app does work on the Nexus, so you can use it as an e-reader. Unsurprisingly, all other Amazon apps will not function on the Nexus, because, of course, its not a Fire HD. There are a considerable number of available games, nearly all of which benefit from the large, high definition screen.  A select number of applications are considerably better on a tablet (Pinterest, TED, Bloomberg, YouTube, and, of course, the Google suite of apps) than they are on a phone or even a desktop; only a few apps were markedly worse (Facebook).

General Utility: The most pleasant surprise I encountered (and continue to encounter) with the Nexus 10 is just its sheer functionality. It should be noted here that I'm a heavy user of all things Google (Gmail, G+, blogger, Google calendar, Google drive, etc) so having all those features that I already utilize in a highly accessible locale is uber handy. If you're similarly ensnared in Google's far-reaching web then you'll almost certainly love its aggregator/summary function which synchs all of the above applications into a single feed. Example: opening the aggregator will present you with a snapshot for your day. It will present you with all your appointments, important events to keep in mind (like birthdays), have a running countdown to much-anticipated events, provide you with the weather forecast, craft a synopsis of what your friends are up to, create a reading list of recent posts from blogs you follow, and track any inbound packages in real time. It's essentially what Facebook desperately wishes it was. Any of the above can be activated and interacted with by voice commands, which work decently (about 65% accuracy, 90% precision and 10% unintentional hilarity). The keyboard is also extremely viable. Is it like a physical keyboard? No. Is it light-years better than what you'd find on a phone? Definitely.  Lastly, the battery life is respectable. It requires charging overnight most nights, but easily lasts through the day without issue, even after heavy use. You can go 2.5-3 days at a time without recharging with light to moderate use.

Other perks: The Nexus 10 is one of the very few devices presently on the market that does not require the owner/user to link the tablet to an existing account with a wireless provider. There are no data plans attached. Seriously. This is not another iteration of the nonsense Amazon tried to pull with the Fire HD that claimed no data plan was required, then buried the truth that one would be necessary after a year of use in the extra fine print. However, no data plan means that the tablet is not 3G/4G capable in its own right and is entirely reliant on nearby wireless hubs. Keep this in mind if you're in a rural area or otherwise receive spotty wireless. Once the Nexus gets connected it's lightening fast, but will waver and shut down all web based functions the moment it's taken clear of a hub. Like all android devices, all background settings, interfaces, and applications are managed entirely by the user. You have complete freedom to make your experience with the Nexus anything and everything you want it to be. The Nexus also allows for the creation of multiple "profiles" for individual users in a household, which allow each user their own UI and privacy controls.

Cons: Like all new technology, the Nexus is not without its flaws. The screen itself is extremely sensitive and can often lend itself to "misclicks" (we haven't taken off the protective plastic covering and still occasionally get this). Additionally, the OS is prone to freezing and/or crashing every now and again (basically locking up entirely, then rebooting after about 30 seconds).  In the past month or so our Nexus has crashed about 4-5 times. No data has been lost nor any critical functions disrupted, but it can be irksome. The dimensions of the device sometimes do not align with the intended resolution of a given app, which can distort the overall image. Also, though the tablet has a USB port, it is meant to interact with the charger rather than act as a gateway for USB capable devices. It was a bit disappointing to not be able to link the Nexus to an external hard drive, but there are workarounds available to facilitate the transfer of data. Lastly, Flash does not yet work on the Nexus, but this may be remedied in the future.

In all, an excellent bit of hardware and a promising offering by Google/Samsung. It's definitely worth your consideration if you're in the market for a tablet and/or use the Google suite extensively.


Alright, well with that I am off.  See you all in a couple of weeks!