Posted by Kel
Wow. Just wow. The past week has been chock-full of excitement in almost as wide a variety of disciplines as one could imagine. Of course, we have the Thirtieth Olympiad providing an almost overwhelming, if certainly heart-stopping, display of athletic mastery. The Games in themselves have been such a pleasure to behold, but we were treated to an additional stirring development as the folks over at NASA successfully guided their Curiosity lander to the surface of Mars. If you haven't seen the replay of the landing, it's definitely worthwhile to go check it out. Watching that cadre of scientists explode into what must have been unparalleled joy elicited serious goosebumps. Once again, I'm in awe that the breakthroughs we've borne witness to in 2012 are occurring during the course of our lifetime, nonetheless in the past eight months.

As these advancements unfold around us, and the boundaries of what is possible are contorted and drawn taut, it's almost tantalizing to try and imagine what might come next.  What are we, as a species, truly capable of?

Though we'll have to wait and watch as the answers to that question become apparent in real time, we can indulge our imaginations with 2312, the latest title from Mars Trilogy author Kim Stanley Robinson. Not only will this book present a plethora of responses to the above question, but it will sate your scholastic curiosity in a way that's unfortunately uncommon in the realm of modern fiction. 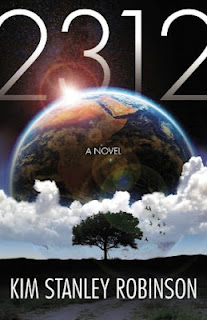 Beginning around the incept of the titular year, the story opens on the planet Mercury and we're immediately thrust into a universe that we, in this era, can recognize but simultaneously struggle to envision. Technological progress is such that almost the entirety of the solar system has been colonized and those celestial bodies not actively being used for human habitation are treated as conglomerates of valuable resources. Interplanetary travel is commonplace and terraforming is a critically important amalgam of science and art practiced by an elite few.

The would-be protagonist, Swan Er Hong, is one of said illustrious planet-crafters. (I say 'would-be' because though there is a discernable plot, the actual story being presented by Robinson is that of the human species and our latent potentiality. More on that in a minute.) The tempestuous, volatile Swan is a literal embodiment of all that it means to be mercurial, including being a native citizen of Mercury. A famed virtuoso amongst both ecological and artistic circles, Swan finds herself torn abruptly from the comforts of her privileged existence after the death of her mentor and grandmother, the Lion of Mercury and de facto ruler of the planet. When signs point to the death stemming from less-than-natural causes, Swan embarks on what begins as the execution of her grandmother's will but what quickly morphs into an adventure that is a smattering of murder mystery, a pinch of love story, a heap of interplanetary diplomatic jockeying, an AI conspiracy that echoes of Asimov, and a race against time to save humanity from itself.

That alone would be sufficient fodder for just about any thriller or work of science fiction, but the plot we're presented with is only the lead line that allows us to be dawn though breathtakingly expansive universe that the author has crafted. Though 2312 is not a prequel or sequel to the Mars Trilogy, fans of the latter will take comfort in knowing that Robinson brings his same unique scope to world building, simultaneously unfathomably large and microscopically minute, to his latest effort. That being said, 2312 was designed to be a stand-alone book and no prior experiences with Robinson's works are needed to enjoy  it.

So what are we talking about that makes this literary universe so gobsmacking that I'd go on about it for paragraphs at a time? Asteroids can not only be succesfully terraformed, but transformed into biomes that either went extinct eons ago or never previously existed. Cities skate along, monorail-like, on titanic tracks. We know that humans have figured out how to traverse the solar system, but they've also unscrambled most of the human genome. A person's DNA can be reconfigured at will to undo the harmful effects of radiation or prompt the body to grow or shrink to better withstand non-Terran gravity. Perhaps more tellingly, a denizen of this far-flung century can have their vocal chords altered in order to purr like a cat or grow an additional set of genitalia in order to experience what an orgasm is like for someone of the opposite gender.

Due to this facility with our own bodies, humanity has transitioned to a post-gender society. This, in conjunction with our successful slowing of the aging process (the average non-Earthbound person lives to be more than 200 years old), allows for a degree of unprecedented experientialism. With a lifespan more than double that of their predecessors, humans living in Robinson's universe can spend years honing arcane skills or experimenting with various hobbies. However, while the individual thrives, the species teeters on the brink of self-destruction. Earth is a desolate quagmire of political bickering and environmental disaster, seemingly at odds not only with what its inhabitants believe are profligate "spacers" (off-planet natives) but with itself. Those selfsame "spacers" quibble as to whether or not Earth is even worth saving. Where does humanity's fate lie?

The science is deeply, truly satisfying. There are several points during the course of the book where you may wonder Why aren't we doing this right now?  Robinson's dedication to presenting an accurate, if not entirely cost-effective, explanation for the phenomenon and technology in his universe is painstakingly clear and one of the most enjoyable aspects of the text. Furthermore, the author's facility with prose is exquisite. Meiville fans may rejoice and the rest of us can enjoy a good workout for the old neurons.

Bottom line:  Have you gone out for a meal with friends and still have fond memories of the evening, but can't recall for the life of you how the food was? That's pretty much this book. It's a read for those who A) love a challenge B) adore science C) both A and B. The plot itself is trite, drags on occasion, and the ending is more than a bit "convenient" on a number of levels, but the overall experience is such that these don't really matter. You read this one to go along for the ride and you won't be sorry you did.